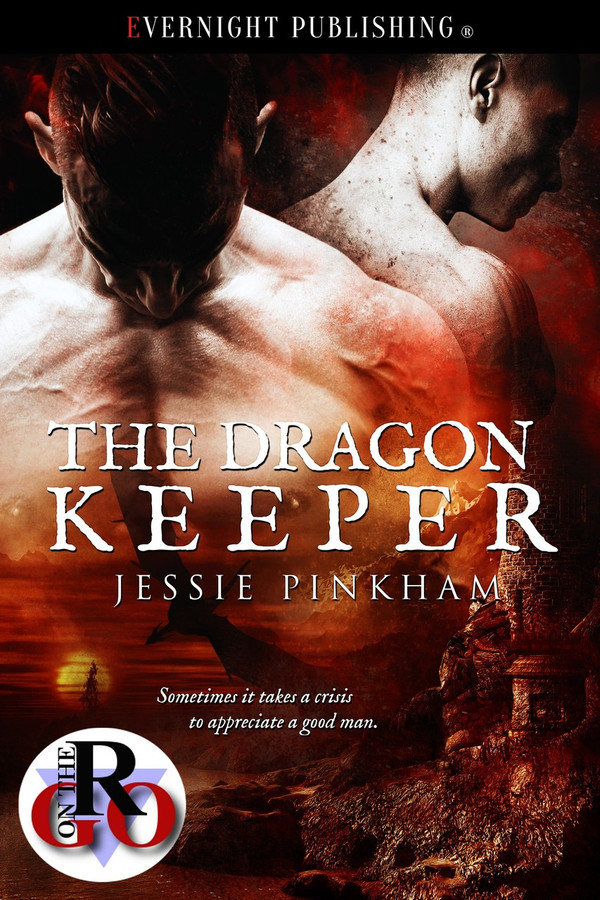 Sometimes it takes a crisis to appreciate a good man...

When Aldric first meets Lito, he considers the man a nuisance. As a dragon keeper for the kingdom of Corancia, he has more important tasks than answering an artist’s numerous questions about dragons.

Lito travelled to Corancia so he could observe dragons firsthand for his paintings, and he’s full of questions about the magnificent creatures. His questions aren’t merely for his art, however, they arise from his deep love of dragons. When he overhears a plot by his own kingdom to eliminate the animals, he has to choose between his loyalty and his beloved dragons.

Working to prevent the extermination of dragons throws Aldric and Lito together. Lust is in the air, and if they’re lucky, they could end up with a happily ever after.

Once the artist set down his pen, Aldric ventured to ask, “Does it take many years of training to be an artist?”

“To be a good one, yes. Particularly when it comes to the details of preparing materials and paints. However, at the risk of being outrageously bold, after the way you were looking at me I’ll be more than a touch disappointed if you are thinking only of my craft.”

It was very bold indeed, but Aldric found he liked that. “Not only, no.” He glanced down at Lito’s hands. “Your hands are nimble, and you have such control.”

Lito smiled. “Perhaps you’re wondering what else I can do with them?”

Aldric felt himself blush. “You are outrageously bold.”

“And you need not hold yourself back so much. Certainly not after I established that you aren’t the only one interested. Is everyone in the north so restrained?”

“No. I spend more time with dragons than with people.”

“We ought to do something about that,” said Lito. He reached out, placing one hand on the side of Aldric’s face. “I see no reason you can’t enjoy human company when your workday is completed.”

Aldric did not enjoy the company of just any human. Lito’s was among those he did enjoy. “I don’t know the custom for seducing a houseguest,” he confessed. “Am I supposed to offer you supper first, or take you to bed straightaway?”

Lito laughed. “I believe I’m the one seducing you. In either case, bed, please.”

Aldric took Lito to his bedroom, glad that his bedding was recently returned from the laundress. It would not do to appear slovenly.

Not that Lito paid heed to the room, as his attention was reserved for Aldric. Specifically, removing Aldric’s clothing. He made short work of it all, followed quickly by his own. Naked, they admired each other.

Aldric was not one to admire for very long when he could be touching. He ran his hand down Lito’s neck and traced the muscles on the artist’s chest, enjoying not just the feel of muscle but the way Lito reacted with quickened breath and shivering skin.

He sat on his bed and pulled Lito down so the other man was straddling his lap. This was an excellent position, which allowed for roaming hands and the thrill of their cocks bumping together. Lito also took this as time for kissing. Aldric was not always fond of the activity, but he found with Lito he quite liked it. All the more so when Lito arranged himself so their chests were together and his hands traced a roving pattern on Aldric’s back at the same time his tongue explored Aldric’s mouth.

It had been some time since Aldric last enjoyed the company of another man, and he forcibly quelled his impatience. He found it was always better to take one’s time in matters of sexual pleasure, so he focused on individual sensations: the feel of Lito’s weight on his lap, the sound of their kisses and Lito’s barely audible whimpers, the heady scent of aroused men, and the shocks of pleasure when their cocks touched.

Lito dragged his fingernails along Aldric’s spine and pulled his mouth away. “You see, it pays handsomely to be outrageously bold.”

Such was not Aldric’s style, but he appreciated it in Lito. “Indeed, it does.” Then he put his mouth to work pressing kisses along his lover’s neck, which earned him a series of delightful moans. He enjoyed a vocal lover. Each noise served as a reward for his efforts and told him what his partner especially liked.

He leaned to lie flat on his back, taking Lito down with him. The weight of another man’s body atop his own excited him, as did Lito’s next enthusiastic round of kissing and rubbing.

When the artist next stopped kissing he said, “I do believe I spoke of what else I can do with my hands. I ought to demonstrate.”

His fingers were as nimble as earlier, only now the quick motions danced around Aldric’s sac. “You are very talented,” said Aldric.

“I always endeavor for the best possible results.”

How fortunate for Aldric. He gasped as Lito took his cock in one hand while the other continued its tantalizing massage of his balls.

“It’s a benefit to bedding an artist.” Lito smiled, clearly pleased with Aldric’s reaction to his ministrations. “Well-trained hands combined with ceaseless striving for perfection.”

If one considered an orgasm perfection, Aldric was fast approaching it until Lito suddenly stopped and said, “I want to undo you, Aldric.”

He was about to remark that letting go of his cock was not a good way to achieve that goal, when Lito did something remarkable. He lowered himself down Aldric’s body and took Aldric’s cock in his mouth.

The sensation was so overwhelmingly wonderful that it took Aldric a moment to ask, “What are you doing?”

Lito paused, which was a great loss and made Aldric regret his question. “You don’t mean to tell me you’ve never done this?”

“I’ve never heard of taking a cock in my mouth.”

The artist’s eyes widened in surprise. “How dreadful. I must show you what you’ve been missing.”

The Dragon Keeper is a fantasy/romance set in the northern kingdom of Corancia where dragons and humans live side by side. Humans and dragons have developed a symbiotic relationship where the humans provide shelter for dragons and the dragons help protect the kingdom against enemies. It has become a very useful arrangement as the dragon population has exploded so there are no more caves for them to live in, the humans provide them with shelter. The dragons are quirky, sometimes demanding yet require very careful handling. The northern king appointed a dragon keeper, someone who knows dragons and what they need. Aldric has recently been promoted to dragon keeper in Corancia after having worked as an assistant to his grandfather for fifteen years. Whereas the northern kingdoms love and protect their dragons the southern kingdoms have eliminated every dragon! Now the southerners are planning to expand dragon eradication to rid the world of all dragons simply because they neither understand nor the respect the majestic creatures. Lito is a southern artist, unlike his countrymen Lito is endlessly fascinated with dragons. As he has never seen a dragon Lito travels to the north, so he can sketch, draw and paint the dragons. Lito arrives in Corancia and meets Aldric to request permission to sit with the dragons. Aldric reluctantly agrees to Lito sitting with the dragons but his patience is sorely tested with the never-ending questions! In the beginning Aldric is less than enthusiastic to have Lito underfoot every day always asking questions, sketching and drawing his beloved dragons. The more Lito learns about dragons the more he falls in love with them. As he is so calm and quiet the dragons unexpectedly learn to trust him very quickly and when Aldric notices this he begins to look at Lito differently. This is when things change between the men and their mutual love of dragons draws them closer, when Lito faces danger with Aldric and the other northerners it seals the deal as far as Aldric is concerned. I recommend The Dragon Keeper to all dragon/fantasy/m/m romance lovers. It’s a short, entertaining read with a bit of everything to keep you entertained.

In this fantasy-like world, dragons and humans live side by side – well, in the northern kingdom of Corancia, at least. Humans provide shelter for a dragon population too big to live in the available caves, and dragons help protect the kingdom against its enemies. It’s quite a useful arrangement, and because dragons are quite quirky and demanding and require careful handling, the northern king has appointed a dragon keeper as a sort of go-between who knows what the dragons need. The south, however, has eliminated all their dragons, and is now planning to expand their efforts to “cleanse” the world of creatures they neither understand nor respect. Aldric is the norther dragon keeper, and he is good at his job. He doesn’t have a lot of patience for the southern artist who wants to sketch and draw and paint the dragons, and ends up asking Aldric a ton of never-ending questions. As a result, Aldric isn’t very enthusiastic about having Lito underfoot – not at first, that is. Lito, different from his countrymen, loves dragons, is fascinated by them, and wants to know everything about them so his art can be accurate. I loved his curiosity and his determination to do the beauty of the dragons justice. But I began to admire him when he steps up in their defense – not an easy task for a peace-loving artist. Aldric an Lito come from very different worlds, but they share their love for the dragons. This common interest draws them closer, and the shred danger they face means they begin to open up. All of this happens quite quickly, but the suspense and action made it feel likely they’d get to a point of trust faster than they might have under “normal” circumstances. And anyway, this is fantasy, after all. If you like dragons and fantasy, if you enjoy watching two men grow close because of shared danger and a common goal, and if you’re looking for an entertaining read with some red-hot passion, then you will probably like this short novella.

His for Keeps by Jessie Pinkham