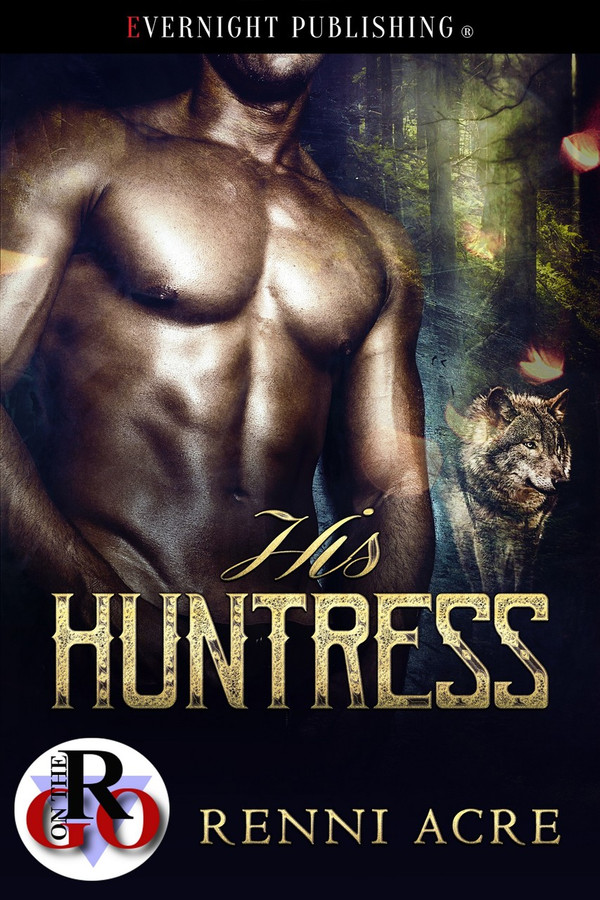 When Dusty agreed to pose as the bride-to-be for the ceremonial hunt, she didn’t expect to meet her fated mate—hours before he was supposed to marry someone else! They hunt as wolves, and he has no idea she’s not his bride. As if he’d choose her over a pretty princess.

Warned that his bride isn’t much of a hunter, alpha Joss Kendall is stunned when the shewolf at his side takes down a wild boar. The skilled huntress isn’t his bride, but she is his fated mate. Dusty is scarred and unkempt, but she stirs his animal desire and breaks his famous self-control.

To claim Dusty, Joss will have to overcome her fears and seduce her heart. But he’ll also have to contend with the powerful father of his jilted bride. And when his mate’s life is endangered, Joss will unleash the inner wolf he’s been suppressing for years…

Joss stepped closer. “Did you know—” He began with an inquiring tone, then asserted in a gravelly voice, “You had to have realized, at the start of the hunt, that you’re my fated mate.”

She nodded, her enchanting eyes even brighter. “But you came here for the alpha’s daughter. I’m not—” She straightened her shoulders, and her dejected tone turned defiant. “I’m not pretty or tame.”

He closed the distance between them, still resisting the need to touch her. “Antonia gave up her place in the ceremonial hunt.” His voice had deepened. “I’m not obligated to honor the marriage, even if I hadn’t presented you with my kill, which you accepted.” He glowered, daring her to deny the import of her actions. “I hunted alongside you, and I consumed what you offered. You are my fated mate. The only thing left is for me to claim you.”

She gaped at him. “What? Just like—you’re not mad?”

Shouldn’t he be angry? He couldn’t even muster ire for Antonia. By her own duplicity she would end up jilted at the altar. Dealing with her father … there wasn’t much the pompous alpha would be able to do about it, especially when Joss walked out of the woods mated to Dusty. Taking in her astonishment, it did occur to him to be irritated about her willingness to give him up. So he asked her, “If I hadn’t realized you weren’t Antonia, would you have let me walk away? Bind myself to the wrong mate?”

“I don’t know,” she whispered. The catch in her throat and her obvious torment assuaged his anger, somewhat.

“Why didn’t you reveal who you were as soon as you realized I was your mate?”

She folded her arm over her ribs, cupping her elbow. “If you wanted her,” she lifted her free hand, helplessly,“how could you want me? As women we’re nothing alike. Besides there’s the alliance.”

“I don’t care about the damn alliance,” Joss burst. “Whatever it’s worth.” He was angry at himself, rather than her. His father had been right to discourage him from marrying Antonia. Joss had been about to give up being with this fated mate. Why? To prove he was a worthy leader? He’d picked the most spoiled, least wolf-like princess in order to deny his true nature.

“Anthony Sylvo is a powerful alpha,” Dusty said, sounding worried rather than argumentative. “He’ll be beyond pissed.”

“Good,” Joss grinned maliciously. He was looking forward to causing a scene, actually. He knew Anthony Sylvo didn’t deserve to be disrespected, and even though Dusty was fated to be his, his father and the pack could suffer for the scandal. But after years of toeing the line, of molding himself into the best son and alpha, Joss felt like he was about to break free. Dusty wasn’t sweet or well-bred, but he burned as he looked at her. She was fierce and beautiful, so very real and untamed. She was the opposite of what he thought he wanted and exactly what he needed.

If anyone challenged his mating to Dusty, they would find out how brutal an alpha Joss could really be.

He took another step closer to her, slowly as not to scare her, holding eye contact so he could see the strength of his intent.

Dusty has had a harsh existence and things aren&#039;t looking much brighter when a shifter &quot;princess&quot; approaches her for a favor. She is screwed if she does and screwed if she doesn&#039;t, so she chooses what she envisions as the least dangerous option. Joss is taking one for the team. Or pack as it were. He&#039;s resigned himself to never meeting his fated mate, and is ecstatic when she is on the traditional pre-nuptial hunt that will join them and is non other than his intended. But circumstances aren&#039;t as they seem, and when Dusty is revealed as his mate but not his intended, things promise to get ugly. Age doesn&#039;t determine leadership, as illustrated by Joss&#039;s brothers. When Joss follows his heart and chooses Dusty as his bride, things do decline but Dusty proves herself more than capable as an alpha&#039;s mate. This was a case of insta-love and while Joss was the hero, Dusty stole the show for me. The short story flowed well and kept me interested and was tied up nicely with an epilogue.

4.5 stars Really loved this! Just wish it was a bit longer. Looking forward to more from this author!