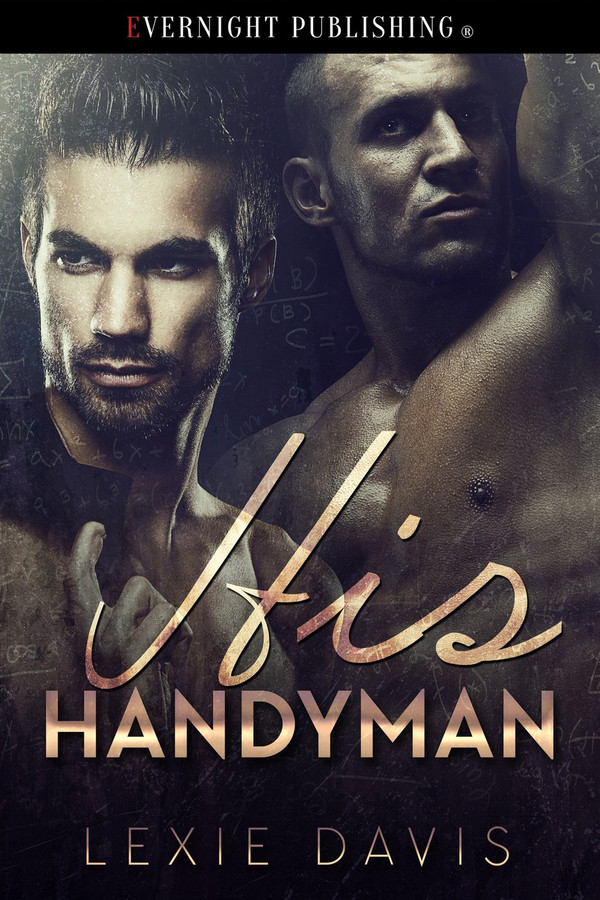 When Austin Beckham’s sister suggests that he build his dream deck in an effort to nurse his broken heart, he jumps on it. Keeping his mind and his hands occupied was a good idea. Avoiding his ex lover’s flamboyant displays of affection toward his new lover was an even better idea. However, Austin knew nothing about carpentry. Determined to gain information from the hardware store, he meets Roman, a sexy cashier that threatens to heat up Austin’s already sweltering hot summer with just one look.

Roman has worked in construction nearly his entire life and wanted a change after his father caught him with another man in a construction trailer on a job site. Taking a lower-paying job at the local hardware store, he meets unskilled do-it-yourselfers all the time but Austin was different.

What started out as a simple question from Austin turns into something more when Roman arrives at Austin’s house for a door instillation. Sexual tension crackles between the two men as they fight the temptation to give in to their desires. Playboy Roman is good with his hands but how will he handle matters of the heart?

“Here.” Becky shoved a piece of paper at Austin’s chest as she walked past him into his house. “It’s from Mom.”

Austin read the paper and laughed. “Why didn’t she come over with you?”

Becky went into the kitchen and grabbed a beer from the fridge. “‘Cause I came straight from work.” She pointed to the paper. “What’s it say?”

“‘Dummies tip of the day: When building a deck, hire a professional.’” He chuckled. “So true.”

Becky sat on the sofa and propped her feet up. “It must have come from her calendar.” She popped the top on her bottle and took a swig. “You know you’re going to have to get a different door, right?”

“Those kind dry-rot something awful.” She stood and walked over to the door, opening it. After popping the door sweep off, she looked at the wood. “Am I right or what? Take a look.”

Austin bent down to see what she was talking about. “Okay. What am I looking at?”

“Rotting wood. I had to replace mine a few years ago. It’s the same kind of door.”

“How much is that going to cost me?”

Becky shrugged. “I just picked out the door and had the hardware store install it.”

She replaced everything and closed the door. Austin stared at his sister and wondered why she got all the street smarts in the family. She used to complain because he was dubbed “the smart one,” but she was the one who made him look like a fool.

She washed her hands and sprinkled water at his face. “What’s new with you?”

He shrugged. “I’ve been working on that damn deck.” He sat on one of the barstools at the kitchen counter. “Oh, and I saw Oliver smooching Ethan yesterday. They were in the fucking parking lot of the hardware store when I walked out.”

She retrieved her beer from the living room and came back to the counter. “Why do you care so much about him? He’s a dickhead. Let it go.”

Austin ran his fingers through his hair. “I know all that, but it’s easier said than done.”

“Austin, it’s only going to get worse when school starts. You have to play nice with them. Might as well let it go and be done with it.”

He propped his head up on his fist. “Let’s stop talking about me. What about you?”

She nearly spit her beer out at him. He chuckled and threw a towel at her.

He laughed. “At least you’ve been on a date recently.”

She narrowed her eyes at him. “I could fix you up if you’d let me.”

“No, thanks.” Austin leaned back on the stool. “I have enough trouble with men without your help.”

He rolled his eyes. His sister was annoying and sweet at the same time. “I did meet a guy yesterday. Well, I didn’t really meet him. I sort of eavesdropped on his conversation with an older woman while looking for the items I needed from the hardware store.”

Becky leaned on the counter, interested. “Is he hot?”

Austin nodded, taking a drink from his beer.

She sighed loudly. “How are you going to get a date if you don’t ask the guy out?”

Austin shrugged. “Could be. I didn’t see him feeling up a hot construction worker. I guess anything’s possible.”

“You want me to hit on him and find out?”

“No!” She grinned and scooted away from him, heading toward the door. “Becky, I mean it. Leave it alone.”

“That won’t stop me. I know your type. I’ll find him.” She grabbed her keys and left.

Austin rubbed a hand over his face. Now was as good of time as any to place an order for that door. He reached for his wallet and keys and followed her, catching up before she backed out of his drive.

Austin Beckham can’t believe he took his sister’s advice about building a deck to help him get over his heartache at being dumped by his ex-boyfriend Oliver. It’s not so much Oliver dumping him it’s the fact that he walked in on Oliver with Anatomy teacher Ethan! The only problem with listening to his sister is that Austin knows nothing about carpentry. When Austin makes a trip to the hardware store to get a few things he notices an incredibly good-looking man working there. It’s unfortunate that Austin is far too shy to speak to him. Roman McBride has just started working at the hardware store since his father fired him from his construction company, the same company he’s worked for, for five years. Roman doesn’t do happily ever after, he hops like a bunny from man to man. When his father caught him with Taylor in the on-site work trailer he decided he needed a change so he got a job at the hardware. When Austin has to return to the hardware store to get a new door he finally gets to meet Roman and this is when he tells Roman about the deck he’s supposed to be building, except for the fact that he doesn’t know the first thing about building anything. Roman gets the job of fitting Austin’s door so he gets to talk a bit more to Austin and decides to build his deck in his spare time. The more Austin and Roman get to know each other the more Austin realises he wants to be in a relationship with Roman and when Roman realises how close he’s getting to Austin he gets incredibly scared. Things go wrong when Austin gets antsy about wanting to solidify things with Roman yet not wanting to scare him away and Roman starts to worry that the only thing he’s good for is sex, not a relationship. I have no hesitation in recommending that you get a copy of His Handyman to find out if Roman and Austin work things out and find a way to be together.

In His Arms by Lexie Davis