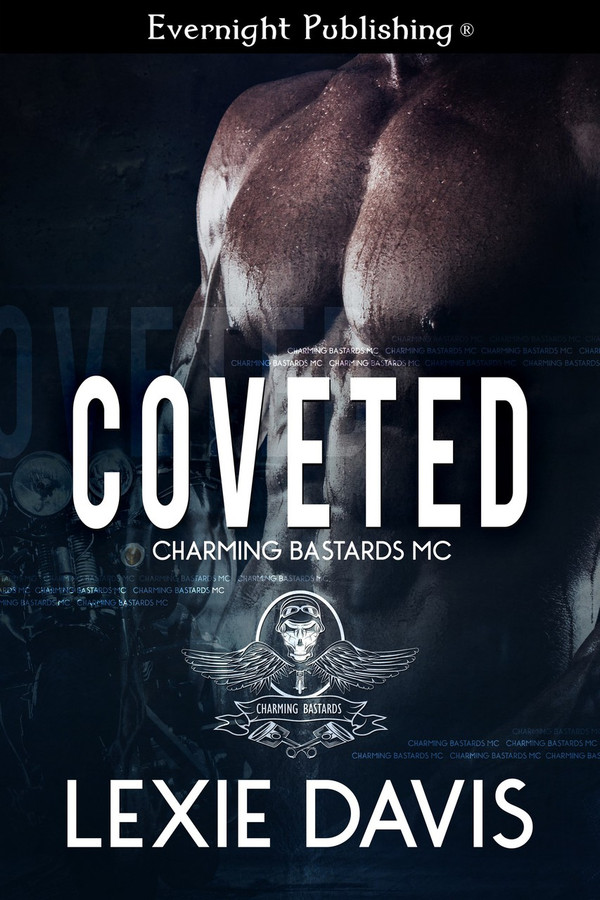 When Scarlett Dawson woke up in the Charming Bastards Motorcycle Club she didn’t know where she was or why she was there. Discarded like trash, the straight-A college student was left in the parking lot with drugs in her system and no memory of how they got there. Scared and alone, she develops a bond with Jack “Joker” Wiley, the man that helped her through withdrawal.

Joker had seen a number of things since he patched in as a full member, but he’d never seen anything like Scarlett and her situation. Another motorcycle club used her as a pawn to get to the Charming Bastards MC and it worked like a charm. Now with a war going on and a woman of complete innocence caught in the middle, Joker must find a balance between the world he pledged loyalty to and the woman he coveted so bad it hurt.

“What are you doing in here?” At the sound of Joker’s voice, she jumped.

“Nothing—I …” She glanced back to the wall of paddles and canes. “Are you into this?”

Joker stared at her for what felt like an eternity. “Define ‘into.’”

“Bending your girlfriend over the spanking bench and smacking her ass with a paddle before you fuck her.”

He actually chuckled. “Yeah. I’m into that.” He walked in the room and stared at the wall. “No girlfriend though.”

“Casual affairs?” Scarlett asked. She found him fascinating. All her psychology classes were kicking into full gear while being involved in this mess that Ollie had gotten her into. She still pretty much felt like shit but her mind couldn’t have been more clear. It was an odd sensation. Something she didn’t really understand.

“You didn’t answer my question,” Joker quickly changed the subject. “What are you doing in here?”

She shrugged. “I was bored. I figured getting a tour would involve dirty deeds so I just wandered about into doors that were opened and not closed.”

“Wandering about can get you into trouble too.” Joker glanced to the side. “I’m offering you an option if you don’t want to go back to your dorm room. You can stay here, at the club, while we try to sort this mess out with your friend.”

“Stay here?” She thought about that. “With you?”

He didn’t say anything. Scarlett wondered what had happened while she’d been out of it. He sat beside the bed watching her each time she woke up. He held her hair for her when she’d been sick and he helped her work through all the other shit that went along with withdrawal.

As far as she knew, he didn’t do anything inappropriate. He and the rest of the club had seen her naked which mortified her, but nothing bad happened. She chewed on her lower lip. Was he implying something more should happen? That he wanted more with her? As soon as that thought entered her mind, she pushed it aside. Very few men wanted her for her charms in the bedroom. That area of her life was a complete disaster.

“How exactly do you propose that works, roomie?” Scarlett went to the wall and grabbed a hefty paddle. “We share a room until one of your casual dates visit. Then you kick me out to entertain myself with … people offering me drugs? Or worse, I stay in the corner while you and your friend are going at it on the bed?”

She smacked her hand with the paddle and yelped. Clutching her hand to her chest, she put the paddle back. She didn’t know about kinky parts of sexuality. There was plenty that interested her, but she had barely gotten down the regular stuff, much less kinky stuff.

Joker reached for her hand and pulled her around to face him. Instead of answering her question, he slipped his fingers under her hair and cupped her head, leaning in to kiss her. It didn’t take much effort for her lips to part for him. The simple brushing of his lips against hers made her entirely aware of him. His big body so sturdy and protective. The warmth from him gave her comfort. He tilted her head to deepen the kiss, thoroughly exploring her mouth with his tongue. God, she had never had someone kiss her like that. Not with raw sexual energy and definitely not in a way that created a desperate need for her to rub against him.

She pulled back and stared into his eyes. “I’m not into threesomes.”

“I’m not going to stay in the room while you and some chick are going at it on the bed.” She licked her lower lip. “My roommate did that once and it was the most awkward twenty minutes of my life. Nothing but slurpy sounds and grunts.”

“Clearly, you missed my point.” Joker stared at her with a trace of humor in his eyes. He leaned in and nibbled on her lower lip. “I’m not planning on making you watch me with some other chick.”

“Good.” She gripped his shirt and held on to him. “That’s not as fun as it sounds.”

He chuckled, still nibbling on her mouth. “You, Scarlett. You’d be the one in my bed. The one in my arms. The one making slurpy sounds while I grunt.”

She nearly swallowed her tongue. “Me?”

Good short and no cheating. She&#039;s a college student who befriends the wrong boy and he drugs her and drops her naked body in the MC parking lot. They have to figure out the who and why and fast. The hero is immediately taken by her and they get together. She&#039;s quirky but she&#039;s just a good girl who got used by a jerk classmate. They have adversity but stay together strong. Can&#039;t wait for the next one.