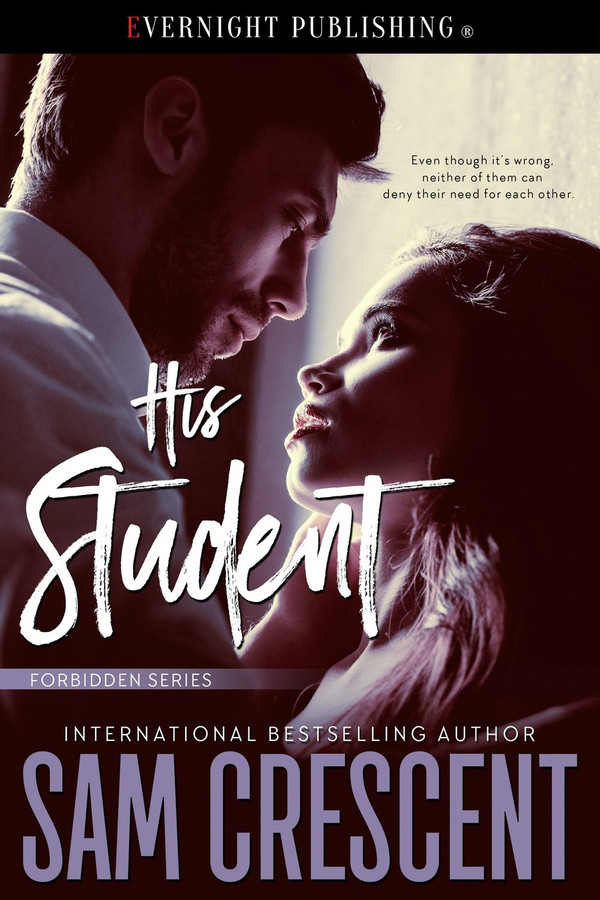 The moment Elijah looks at the curvy waitress serving him, he knows he wants her—and he’s going to have her. This is the start of his new life, in a new town, and his chance to put all of his past behind him.

But Mona Evans is not just any waitress in the diner. She’s a student, and after one night of being completely reckless with a stranger, she never expects to see him again.

So imagine her shock when she learns that Elijah isn’t just a new guy in town—he’s her new gym teacher.

Mona has never broken any rules before, but being with Elijah, it fills her with such need that she can’t say no. Even though it’s wrong, neither of them can deny their need for each other.

Whatever is going on between them cannot last the year. Mona is determined to leave town the moment she graduates. But what will she do when Elijah gives her a proposition that she can’t refuse?

For the next forty minutes I watched my class as they ran track. This, for me, was the easiest way of getting through the first week. I could assess all my classes and then plan the lessons accordingly.
This was the senior year and as such, their last year here. Several of the girls in the class were already giving me the eye that told me they were thinking of trying to fuck me.
Newsflash, I don’t fuck students.
Glancing toward Mona, I couldn’t believe she was a damn student.
There’s no way she looked like a girl. Even now as she was running, her tits had a nice bounce to them, and even as she was red in the face from exhaustion, I couldn’t help but think of her riding my cock.
She’d been so incredibly tight Friday night.
Another thought entered my head.
I saw some of the dirty looks she’d received at being forced to remain behind.
It’s not possible.
Yet, one look at her, and I couldn’t help but wonder if she’d been a virgin.
Not all virgins bleed.
I’d never been with a woman so tight before, and she had squeezed me like a fist. She’d also had that aura of innocence around her, which pulled me in.
Damnit.
This wasn’t getting any better for me.
By the end of the lesson, I was more than ready to go home.
However, I knew she’d try to avoid me, so once all of the students entered the locker room for the day, I stood in the hallway past their doors, waiting.
Students nodded at me as they passed.
When Mona finally came out, she paused when she caught sight of me.
“I’ve got to talk to the teacher,” she said to her friend, who pouted.
“You want me to wait?”
“Nah, it’s okay. I’m heading home anyway. Go, see Taylor. I know you’re curious about what he has to say.”
The girl, who I think was called Lucy, gave her a hug and then left.
For a few seconds, it was just me and Mona.
She nibbled her lip and waited.
Without a word, I turned and headed into my office. The blinds were already down, offering us privacy.
She entered, and as she passed, I closed the door.
In the next second, I flicked the lock into place.
“You work at the diner.”
“Yes, and you’re the new gym teacher. I really didn’t know. I swear. I won’t tell anyone.”
“Were you a virgin?”
“What?”
“You heard me.”
She nodded her head but didn’t look at me. “I’d never been with a man before.”
I wanted to hit something because how I talked to her, how I treated her, it wasn’t for a virgin but for a man half crazed with lust, with need, wanting her.
“I know this can’t happen again,” she says.
With that, I stalked right up to her.
“Tell me right now you’re not thinking about how good it would feel to have my dick deep inside your pussy.”
Neither of us touched, but I saw the look in her eye. I could feel her body as if I was already within her.
“We can’t.”
There was a moan to her lips as if she didn’t like her own answer.
Without thinking, I touched her. I cupped her face, and those lips … so fuckable. I just couldn’t do it anymore, and I took the kiss I’d been wanting since I saw her standing there in shorts and a shirt.
She looked so sexy, but now I realized it didn’t matter what she wore. She drove me insane with need.

Elijah had never planned to be sexually intimate with a student. After being attacked at his last school, Elijah needed a new school, a new town and a new start. He had no idea the young woman who caught his eye serving him at the diner would end up in his gym class on the first day in his new job as Coach. Mona didn’t have the best of lives, but she worked hard during her shifts at the diner and studied even harder, knowing that the only way out of her mom’s trailer and the current state of Mona’s life was to get a scholarship and get out of town. Sleeping with a teacher was nowhere near her radar and she’s determined it not alter her plans one bit. I found this to be a sexy short story. I found the way Elijah and Mona came together to be believable and completely natural. While strictly speaking taboo, I was reassured that neither Elijah nor Mona knew who the other was in the beginning, nor the power imbalance that would be between them. So this largely let me relax and just enjoy the story for what it was – a hot, sexy romp where two people from different sides of the tracks met, had delicious sex and fell in love. Readers looking for a sexy, happy and erotically taboo story should be pleased with this. I found it to be sizzling and just a little bit dirty, but overall quite optimistic and happy. A very non-traditional romance where the relationship between Elijah and Mona was front and center to everything. With a happy ending that I felt really rounded out their tale this was a great, quick and naughty read.

It&#039;s forbidden, it&#039;s instant love and it&#039;s hot! Yes, I know this is something some people don&#039;t like but every now and then, I love reading a story like this. Not a ton of drama, just two people who shouldn&#039;t be together but are! Will they get caught? Will they stay together? I love that Mona is comfortable with herself, no matte what others say. And Elijah was just HOT!!! Cute story and a quick read! Loved it!

I love a Sam Crescent book! The stories are so amazing, nothing is too taboo or dirty for this author and her stories reflect that. I know every time I one click this author I will get a hot sexy read!

I liked the flow of His Student. And this is a perfect story if you wanna to read something quick with taboo, but without any drama that can comes with this genre. What I liked about Mona is how she was secure in her skin. She didn&#039;t have a complex about her looks. It&#039;s rare, so I appreciate it. And everything would be OK, if not... Mona did one thing, that always irks me, when h or H does it. She made a choice for Elijah. When it happens, I always feel like they are doing it because they aren&#039;t secure in something, instead of doing it for their loved ones. And I liked Elijah. I liked that he gone after what he wanted, even when he knew it&#039;s taboo. That he never gave up on Mona. She was his and that&#039;s that.

His Beauty by Sam Crescent

His to Play With by Sam Crescent