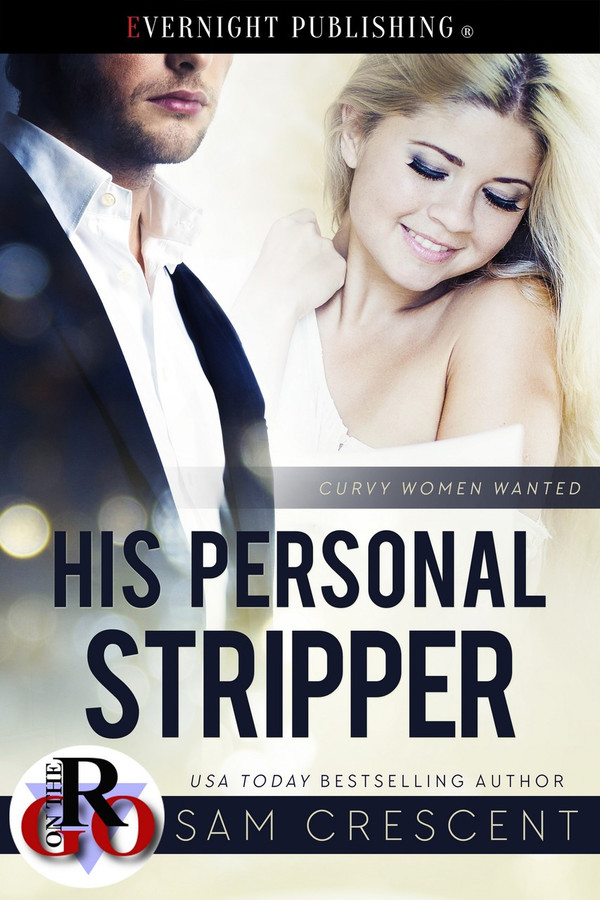 The moment Jack sees her curvy figure and blonde hair, he knows he wants her. Everyone has a price, he just needs to find out what hers is.

Rachel is completely broke and been out of a job for a long time. She’s nearly homeless when Jack propositions her. Being one of the richest men in the world, he’s used to snapping his fingers and getting what he wants—Rachel knows what he wants. He wants sex, and all kinds of dirty things. How can she deny him? She’s broke. Being whatever Jack wants is the only option.

Jack wants everything. Her company, her body, her heart, her soul, but first, he’ll settle for her stripping for him. He loves watching a woman undress and all he wants is to see Rachel’s lush body revealed to him. But what happens when Jack makes it clear he wants more than just a stripper and a fuck? He wants forever—Rachel as his wife, and to put his baby inside her.

From stripping to sex, can it end in love?

There was no way Rachel could deny that he knew how to kiss. Jack completely consumed her, making it impossible to think or want anything else. Slowly, he pulled away and she opened her eyes, only then realizing that she’d closed them.

“Does that answer any questions?” he asked.

He ran a thumb across her lip. “I think it answers mine. Tell me, Rachel, are you wet?”

Heat filled her cheeks. She’d never been with a man so blatant. When she made to hide her face, he captured her chin and shook his head.

“Never hide from me.”

“Becoming mine, you’ll have to get used to it. I don’t allow anyone that belongs to me to hide. Not you, not anyone.”

“Good. Now imagine what it would be like to have my cock sliding inside your pussy, desperate for more. I’ll make it so you forget everything else, and everyone else.”

“What you want is your own personal toy.”

“The thing is, Rachel, I could have any woman out there. Click my fingers and they’ll come panting for more. I don’t want anyone else. I won’t have anyone else. I’ll be yours, and you’ll be mine.” He leaned in close, kissing her neck. “I can give you the world.”

She closed her eyes, thinking about that empty apartment with the mattress. The fact her landlord hated her and wanted to kick her out. All it would take was him to get off his lazy ass to get her stuff out, not that she had all that much.

Tonight was the first good meal she’d had in a week. She’d been eating ramen noodles and anything that was cheap.

After so long without any work, people didn’t want to hire her now. She’d gone from one bit of bad luck to another.

She didn’t want to starve or end up on the streets. This was her biggest lifeline.

Sam Crescent once again reveals just how sexy a story can be when an alpha male falls for a woman with curves. Rachel and Jack are my favourite couple by this author and that is saying something as I’ve never been disappointed by any of her heroes and heroines. I was practically swooning from Jack’s determination to track Rachel down, I’ve always loved the idea of a man being so infatuated with a curvy heroine that he borderline stalks her to find out who she is. It’s like that song by the police that my feminist side tells me I shouldn’t find romantic but I can’t help it. Add to that the fact Jack is in absolute lust with Rachel’s body and can’t wait for her to strip for him it just hits all the right notes for me. Rachel might not ever have considered Jack’s proposition if it wasn’t for her dire situation but seeing her struggle with her situation and then her attraction to him was highly entertaining. And I adored seeing her accept her sexiness and Jack’s attractiveness to her. This was to me a sweet and sexy read that I know I will return to over and over again because of the big smile it gave me. The story in &quot;His Personal Stripper&quot;: Jack knows what he wants the minute he sees Rachel and he’s a man used to getting exactly what he. Rachel is in dire straights and has no choice but to take up Jack’s offer to be his personal stripper. Now Jack has to convince her he wants more than sex but does she believe in forever?

His Personal Stripper was another fantastic book by Sam Crescent. This time around the author outdid herself by going with a sizzling hot but sweet at the same time plot for the seventh entry into her Curvy Women Wanted Series. Jack knew what he wanted from the first time he saw Rachel so he wasted no time in propositioning the down on her luck curvy woman. At first, I didn’t know what to make of his character following Rachel all over town and then offering her a deal she couldn’t afford to pass up. It wasn’t long in this fast paced story that the author brought out the feelings and showed me that he was a good guy. I loved how he protected Rachel. Now, I loved Rachel from the very beginning. Life had been rough on her. She was strong but not hardened by her adversities. Excellent writing, romance, sex and rich characters. I look forward to more Curvy Women books in the hopefully near future.

This is a fab addition to the curvy women wanted series and as always Miss Crescent gives us the best characters and a brilliant storyline. Jack was so arrogant and yet so yummy. Loved this book personally I think the heat level is more than a 3 :)

Sam really delivers with this one !! We need a higher rating !! This is a over the top sexy read !l I love Jack !! Rich hot guy falls for poor girl who is two steps away from being in the streets .

I Voluntarily reviewed a copy of this book So when I started I didn&#039;t know if Liked Jack. He seemed to arrogant and to self assured. But as you read on you find out what time of person he is, what type of people he deals with and how it shaped him. Rachel is broke and out of a job for a year and when he sees her he knew that he had to have her. We think its just for sex but Jack proves o her that its more than just sex and that he actually sees the person she is. Enjoyed it and loved how Jack took care of her and proved that he was more than she thought he was.

Jack always gets what he wants, and he wants Rachel! They are from different worlds. He’s pushy and demanding and awesome. She’s wary, and beautiful and smart. As always Sam Crescent writes a great story and I couldn’t put it down.

It was fetching addition to Curvy Women Wanted series. I loved Jack. At the beginning I wasn&#039;t sure how I felt about him, because he held his cards close to his heart. And, I wasn&#039;t sure how he felt about Rachel. Yeah, sure, he wanted her from the first glance, and he moved like the Flash to get her, but did he wanted more or just to play with her like a doll? But soon I was able to see inside his soul. And what I saw, I liked a lot. Yes, he was this arrogant rich a$$, but also he was so much more. He was loving, caring and protective. Rachel was one lucky girl.

His Student by Sam Crescent

His to Play With by Sam Crescent