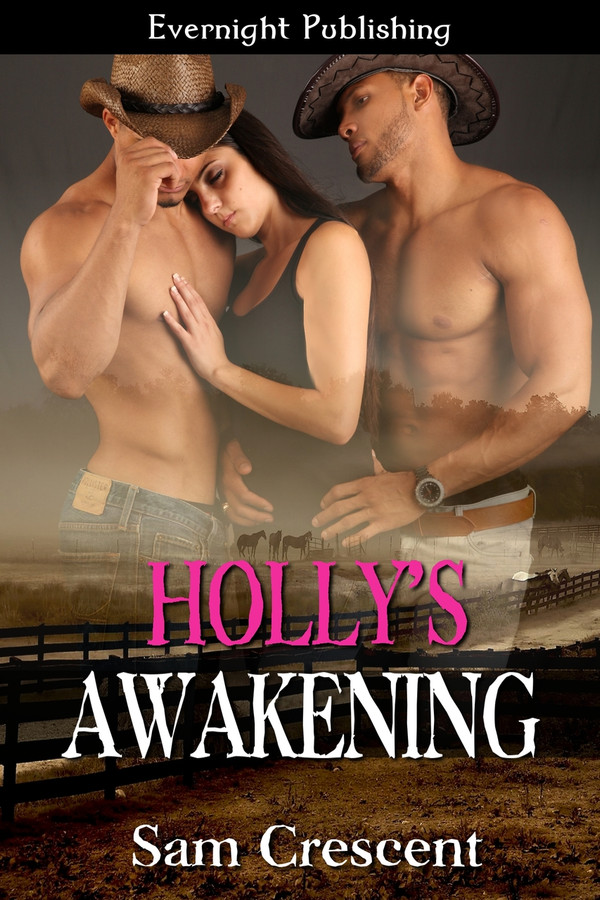 Kade and Steven have been waiting for a woman to complete their family. They’ve been friends their whole lives but they want a woman to share. No woman has captured their attention until Holly Walker comes to work for them.

Holly is quiet. She works hard in order to help her brothers and sisters. The money she doesn’t use for them is taken from her by her father.

Together, Kade and Steven awaken Holly, caring for her and loving her. Kade is a Dom and he takes over making decisions while Steven loves her completely in his own way.

Can Holly truly give herself to two men? She's only used to depending on herself. Steven and Kade have a battle on their hands to make her their woman.

Flicking the button open Kade eased the zipper down. Going to her waist, he pulled the jeans down her thighs until they fell around her ankles.

“Step out of them,” he said. He took hold of her hand and helped her out of the jeans. He kicked the jeans away. She stood in a pair of grey panties. Her arms folded over her breasts, and she shook her head.

Kade took her in his arms. Holly fought him. She lashed out at him trying to push him away. He took the hits until she fell in a heap on the floor.

He went to the floor before her. She covered her face and made the noises of tears, but nothing else came out. Taking her chin in his hands Kade forced her to look at him. Her eyes were red and swollen.

“You can do this. You want to do this. Come here,” he said, opening his arms.

She went to him, curling up in his lap. He stroked her hair in an attempt to help calm her down. “Nothing is going to happen to you. I promise. You’re safe with us.”

“I’ve never had anyone. Not even John has helped me.”

Caressing her hair, Kade glanced over at Steven. His lover was braced ready to take her in his arms.

“You’ve got us, baby. Nothing else will matter.”

He made a vow to himself in that instant. Tomorrow he was going to pay a visit to Holly’s parents and let them know who they were dealing with. If they didn’t like it then he’d make their life hell. The last time he checked they still needed to pay rent for their trailer. He could guarantee they were out on their asses regardless. With Holly, her parents held all the power, but with him and Steven, they were the ones with the power and the money to make their lives hell.

Steven nodded at him in agreement. The other man knew what he was thinking. Kade didn’t know whether to be relieved or a little frightened. Usually, Steven was the guy to find the good in everything.

After some time she nodded her head. “I’m good.” She stood up without any prompting from him. Her hands fisted at her sides. The courage she showed tore at his heart.

Standing in front of her, Kade dropped his jeans to the floor. Her gaze went to his naked body. He rarely wore underwear, and today he hadn’t bothered with any.

Steven hired Holly to be close to her. Kade wasn&#039;t sure about Holly, but he always kepts his eye on her. Holly was quiet, but very responsible for her siblings. Holly was a very strong person, but Kade and Steven helped her out of her situation and took care of her. Kade and Steven were awesome together and the way Holly accepted them and everything they wanted was awesome. This was a very good book!