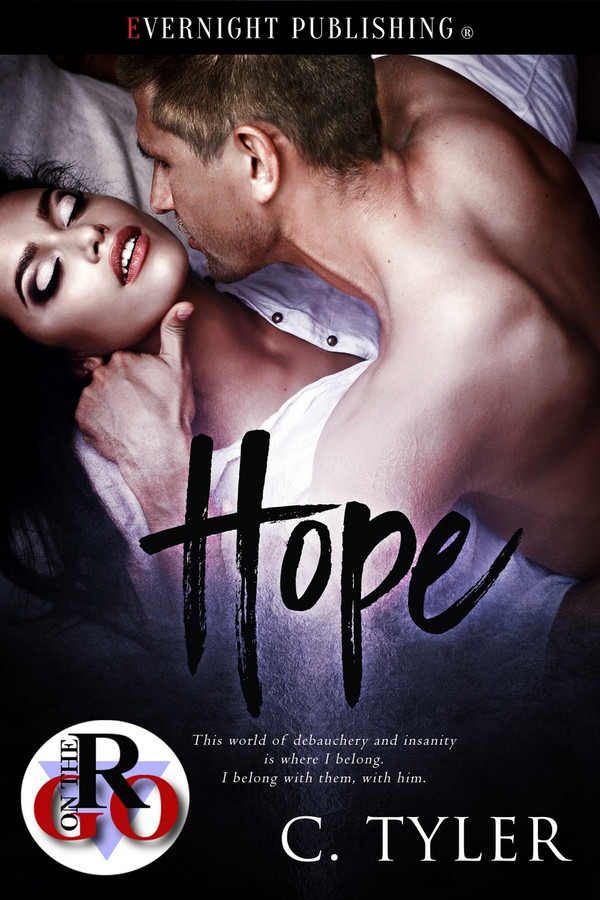 People think the MC life is dangerous, that it’s filled with violence and death. They’re right—but I’ve never felt safer. The real world is what broke me, what scarred me and left me afraid.

This world of debauchery and insanity is where I belong. I belong with them, with him.

He laughs again, and I do the same. Spence leans forward to close the small distance between us and kisses me softly on the lips like he has a thousand times in the past, but before he can pull away completely, I grab his cut and keep him close. He doesn’t put up a fight or even hesitate to kiss me again, deeper than before, and I reciprocate in kind.

His tongue tenderly swipes across mine, massaging it as we kiss one another. He cradles my face while I cling to him. Spencer gradually presses his body against mine and together we lie on the couch. It takes minimal shifting before he’s on top of me, my legs are wrapped around his hips, and my fingers are entwined in his hair.

We kiss passionately and borderline aggressively. Spencer’s always been my outlet, my rough companion when I needed one, and I’m his. That’s our deal, how we fit together.

Clothing is peeled off in near record time. His shirt, cut, and jacket are tossed to the dingy carpeted floor beside us, but when he begins to push mine up my body, I freeze.

“Wait,” I breathe, breaking our kiss so I can speak. He looks down at me with confusion. “Keep it on.” His confusion deepens. “Just for now, okay?”

His brows are pulled together, and I can tell he wants to ask why when he’s seen me naked many times in the past, but he doesn’t. Instead, he sits up on his knees between my legs and eyes my jeans.

“But the pants are coming off, right?” he asks teasingly.

He groans, and his perfect lips twist into another smile. “Good answer, Baby Girl.” He coos approvingly.

Spencer wastes no time undoing my belt and the buttons of my jeans and unzips me. I’m giggling as we both awkwardly shift from side to side to peel them off, but they’re gone soon enough, even after he struggled with my shoes.

I watch him twist and reach behind. I hear the drawer of the nightstand slide open and the sound of a cardboard box. It doesn’t surprise me they keep condoms in the Hoe-tel.

But while he’s fishing for the thin slip of latex protection, I’m not above ogling. Spencer’s buff, toned, and defined. He always has been. He has that good ol’ boy charm mixed with a bad boy attitude, and he’s just vain enough to make sure he’s the whole package. With his jeans sagging low on his hips and his boxers the same, I’m more than capable of admiring his sculpted abs, and even the muscles that cut sharply above his hip bones.

When he twists back around, a square condom wrapper is clamped between his teeth. He wags his eyebrows at me sarcastically, rips open the package, and shoves his pants down. His rock-hard cock bounces free, and I feel my core ache in anticipation. Not only is he built like an Adonis with a naughty streak a mile wide, but Spencer’s a well-endowed man: thick and long.

How’d I get so lucky?

Spicy, steamy, but with a little sweetness, too. It&#039;s a quick read and a lot still happens. It&#039;s obvious Spencer really cares about Mikey and he does whatever he can to keep her safe. Definitely recommend!

I love this book! It was short and sweet with plenty of steamy bits in between, as well as some tenderness. You can tell Spencer really cares about Mikey and the ending is the perfect bit of revenge.