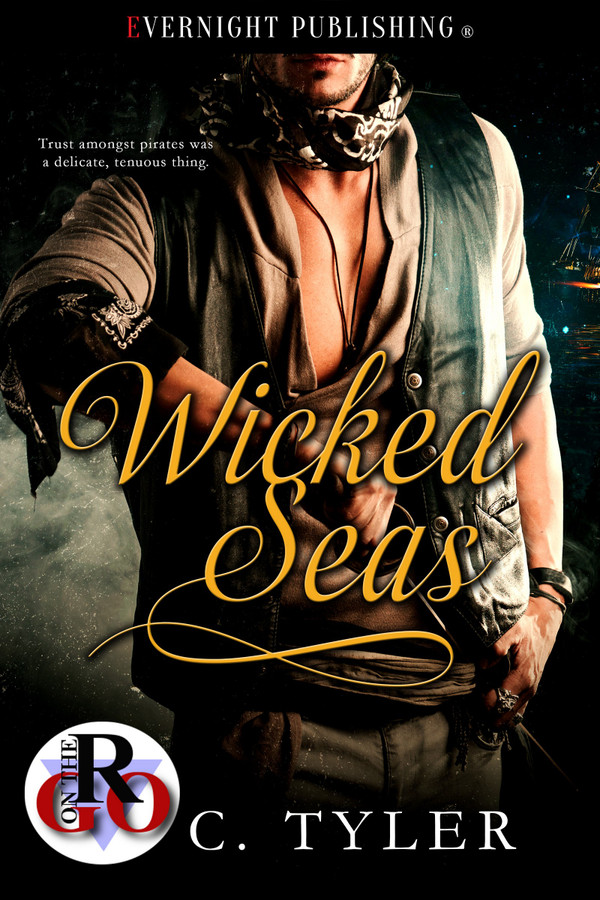 Trust amongst pirates was a delicate, tenuous thing.

Aadhya had dedicated her life to the sea, a pirate queen in her own right. When Charles returns, Addy must do her best to keep from being swept up by his seductive aura until he proves himself worthy of her affections again.

Aadhya and Charles had always been passionate and volatile, the perfect duo that thrived on the chaos they left in their wake, but after Charles betrayed her, he must work hard to regain her trust.

Will she be able to forgive him so they can share in hidden treasure and revenge, or will Charles stick to his selfish ways?

Rising to her feet, Aadhya left her quarters. She took the sharp turn that led her down into the bowels of the ship, avoiding many of those in the lower deck, past the galley and cargo to the brig, and to the prisoner there.

In the cell at the far end, she spotted him sitting slumped on the bench, elbows on his knees and hair in his face. The lanterns brought nearly no light, yet deepened the shadows and made them dance. Whether it was midday beyond that tiny dungeon or not didn’t matter.

“Vane,” she said, the derision thick in her voice.

He peered up at her through tendrils of wild hair, twisted with saltwater and life. His sharp features were exaggerated by the single candle’s light. His fair brown eyes appeared black. If she hadn’t known him, she might have feared him.

There were few whom she’d come across that matched Charles for intensity. He seemed a class all his own. His body was strong and not riddled with disease like many, his eyes were sharp and focused, and his mind was intelligent. The pirate was a dangerous sort, predatory in many ways. She had to be careful.

“Well, well,” he said, his thick, raspy voice sending chills down her spine. Vane leaned back against the curved side of the ship and stared down his nose at her once again. She had left him alone for more than an hour, yet his attitude remained unchanged. “To what do I owe the pleasure, Captain?”

“You know exactly why you’re in here.”

“You pissed me off.”

Rising fluidly to his feet and towering over her in his cage, Vane stalked forward, resting his arms on the bars. He still moved like a predator, with that level of dangerous grace one had to have been born with because it couldn’t be taught.

“Not really that hard though, is it?”

The casual way he spoke, how little he seemed to care, all of it enraged her. Where did he get off acting so glibly about stealing from her, about her righteous anger?

“You son of a bitch. I should leave you in here to rot.”

Leaning forward, he allowed his forehead to rest against the bars. He cocked a thin brow, something unsaid flickering in his eyes. Charles Vane never resembled a feline more, like one of the tigers from Mother’s home. But her anger wouldn’t allow her to care, not after what he’d done to her.

“I trusted you, you prick. How dare you fuck me.”

She’d stepped too close, and he reacted swiftly. Vane moved like lightning, snatching Aadhya by the throat and holding strong. Fear rocketed throughout her, every nerve awakened and vibrating.

Her pulse raced, her breathing became short, and while her head had been forced back, she refused to look away from him. Charles brought her closer. She gripped the bars.

“Now, then,” he said. Charles took a deep breath and let it out slowly, dragging his gaze over her face as he did. “You’re going to let me out of here.”

She scoffed as best she could with his hand so tightly secured. “Am I?”

“Yes, you are,” he growled through his teeth. “The keys are right there.” Vane jerked his head to her right. “Get them.”

Aadhya glanced back. They were hanging from a rusted nail on a support beam nearby. She reached for them, but her fingertips only grazed the ring. Charles gave her enough slack to step back, but kept his grip strong so that she couldn’t escape.

Once retrieved, he motioned to the lock, and she obliged. Vane stretched his free arm around the open door and grabbed her once again, able to release her throat, but sure to keep hold so that she couldn’t lock him inside.

He brought her into his cell, looming over her while Addy kept a hand on the door. A vindictive smile spread across his lips.

The second he let her go, Aadhya slammed the cage shut on his face, nearly connecting bar to forehead. He spun, anger flashing on his features. Before he had the chance to get them, Aadhya tossed the keys into the adjacent cell.

He shoved her against the bars. They dug into her back, but she refused to show him any emotion.

“You think that’s funny?” he asked.

“But now you’re locked in here with me.”

A grin pulled at the corner of his lips. “Was that the point of this, hmm? You wanted to be locked in here with me, didn’t you?” She was silent. He chuckled and pressed his body to hers, pinning her to the bars. “What were you hoping might happen?”

Aadhya stayed defiant, refusing to say a word to him. Charles seemed to find it amusing. As they stared at one another, the pressure in her bodice had changed. Vane had begun to undo the hooks that kept it closed.

“What do you think you’re—”

When she attempted to interfere, Charles swatted her hands away. He grabbed them and guided them to the bars above her head, forcing her to clasp them around the steel.

“Don’t let go,” he said in a voice thick with more than just warning.