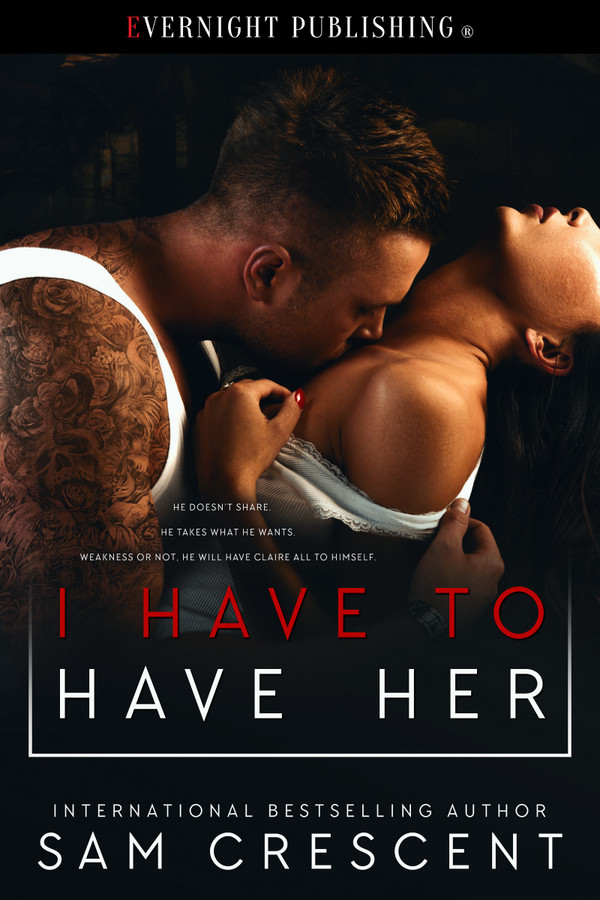 Claire Sutton needs a job and a place to stay. When her best friend lets her live with her, she can’t stay long as she’s never gotten along with Gabriel, her bestie’s brother.

Gabriel hasn’t seen Claire in a long time. Her curves drive him crazy, but he won’t allow any woman to make him weak. He finds her a job, and seeing no end in sight, he comes up with an agreement—a proposition that grants him unlimited access to her while she promises herself she will never fall in love with a monster like him.

She becomes his weakness, and when she is nearly killed, Gabriel has no choice but to let her go. His world doesn’t allow love, but what will happen when he’s hit with the cold, harsh reality that someone else might claim her?

He takes what he wants.

Weakness or not, he will have Claire all to himself.

So far, Gabriel hadn’t asked for rent or to help with the food bill. She cooked for all three of them and cleaned. She tried to do her part so she didn’t feel like she was some kind of pest.

Arriving back in the private parking zone, she didn’t follow Gabriel out, but opened the door and walked ahead of him to the elevator.

She didn’t look at his reflection as they walked on. The metal doors closed.

She took a deep breath, trying to calm her nerves. She held her shoes in her hand and waited.

The elevator doors opened up and she stepped out, waiting for him to open the door.

Once inside, she put the shoes down and was about to leave when Gabriel grabbed her and pressed her against the closed door.

He tilted her head up and she stared into his eyes. His body so close and she liked it.

“What the fuck is going on?” he asked.

“No?” His hand went to her hip. “Nothing is going on in that head of yours?”

“What else would I want to do?”

His hand moved down and she gasped as he cupped her between the thighs. His touch sent a wave of need flooding every single part of her body. She licked her lips. His palm crushed against her clit and she closed her eyes, biting her lip.

“You liked what you saw, didn’t you?” he asked. “You like seeing the men lose control, of being at the mercy of that woman.”

“I don’t know what you’re talking about,” she said.

He pushed again and fire shot through her body. Within the next second, his lips were on hers, kissing her hard, biting her lip. She wrapped her arms around him, but he suddenly grabbed her wrists and pressed them above her head. “You don’t get to touch until you’ve answered my question.”

“I don’t have to tell you a goddamn thing,” she said, wriggling in his hold.

He held both of her hands in only one of his and he skimmed the other down her arm, going to her breast. He circled the nipple. “No? But your body, it’s telling me all it wants to. Your body speaks when your lips tell lies.” He cupped her breast, kneading the flesh. He didn’t linger too long. That same hand traveled down past her stomach, going between her thighs and touching her pussy.

He stopped, moving his hand to the slit down one side of her dress, then he suddenly cupped her through the fabric of her panties.

“Soaking wet, just what I expected to find.”

She could tell him to stop, to get off. The words failed to form. She didn’t want him to stop. This control, this dance they were doing, she wanted to see how far he was willing to go. What he’d do to her.

He pushed her panties to one side and then his finger glided through her slit, stroking over her clit.

“So wet. I bet you’ve never had a real man touch you. Show you what you can do with this body,” he said.

He didn’t stop there and she still hadn’t asked him to stop. What the hell was wrong with her?

Gabriel moved down to her entrance and she cried out when he pushed a single finger within her core. “Fuck, you’re tight. It just goes to show no man has used your body the way it should be.” He growled against her ear, bringing his fingers back toward her clit, stroking her. She opened her mouth to cry out in pleasure. “Do you want me to stop?”

She whimpered. Now he was putting the decision in her hands and she didn’t think she could handle any more.

Just as she was about to tell him to keep on touching her, she heard movement and it wasn’t them.

Common sense prevailed and she pulled out of his arms quickly.

He didn’t stop her.

Within seconds, Rhianna was in the hallway. “Have you two only just got in?” She yawned, rubbing at her face.

“It was a long night. I’m so tired.” Shaken, aroused, needy, she managed to brush past her friend with just a kiss to the cheek. She had to make her escape.

All of these years, she’d promised Rhianna she’d never fall for her brother or be caught anywhere near him. She wasn’t about to start now.

Gabriel lives life on his terms only, and expects everyone else to toe the line. When his younger sister asks if her friend can stay in his home temporarily, he reluctantly says yes. When he finds Claire dancing in his kitchen wearing only panties, she changes his world, and he is determined to get her out of his system. Homeless because her ex punched her and stole all her money, in addition to not paying the rent with the money she gave him every month, Claire no longer trusts men and has no clue why everyone thinks sex is great when all she feels is bored. Gabriel has never liked her, so even though he said she could stay and even gave her a job, she is working to get out because he lives in a world she does not understand. As Gabriel gets to know Claire, he realizes she is not the woman he thought her to be, or even one he had ever known. When they make a deal for 31 days, he believes she will be out of his system and he will move on, but what happens is she is so deeply embedded in his soul he is unsure if he can make it without her. When the scum who wants to get to him goes after his sister and Claire, he realizes he must let her go because it is the only way to keep her safe. Seeing her in the arms of another man, he is left to wonder if he can really live without her. Gabriel is an intense man who is used to controlling his world. Claire is a woman who takes care of herself. These two make for a sexy story of self-discovery and find out the future may not bow down to what people want, but instead what they need. I was fascinated by the story and found Gabriel to be very entertaining as he loses all control when he has always fancied himself to be a man in control. I recommend Gabriel and Claire because with these two the reader is always wondering what is next.

Dayum! I’ve missed this type of writing. Alpha male. Plus size woman. If you’re browsing this and wondering if you should buy it, do yourself and buy it. Money well spent! Also, whomever gave this a 4 must’ve just been mad it didn’t last longer. Sam Crescent please make more books like this...please please please!

So good! Sam Crescent can sure write a big &quot;jerky&quot; alpha. Only thing I could fault her for is that it had to end. The book did not disappoint!

I love Sam&#039;s work and naturally, this one did not disappoint. Claire and Gabriel&#039;s chemistry....loved! The restaurant shootout and hospital visit were a little weird (the scene and conversations) but I enjoyed this read despite. Rihanna and Claire&#039;s friendship can be described as unconditional and I really loved that. The epilogue was cute. Sam can write some hot sex scenes! Overall, an enjoyable quick read.

Sam is back in the GROOVE!

Dayum! I’ve missed this type of writing. Alpha male. Plus size woman. If you’re browsing this and wondering if you should buy it, do yourself and buy it. Money well spent! Also, whomever gave this a 4 must’ve just been mad it didn’t last longer. Sam Crescent please make more books like this...please please please!

So good! Sam Crescent can sure write a big &quot;jerky&quot; alpha. Only thing I could fault her for is that it had to end. The book did not disappoint!