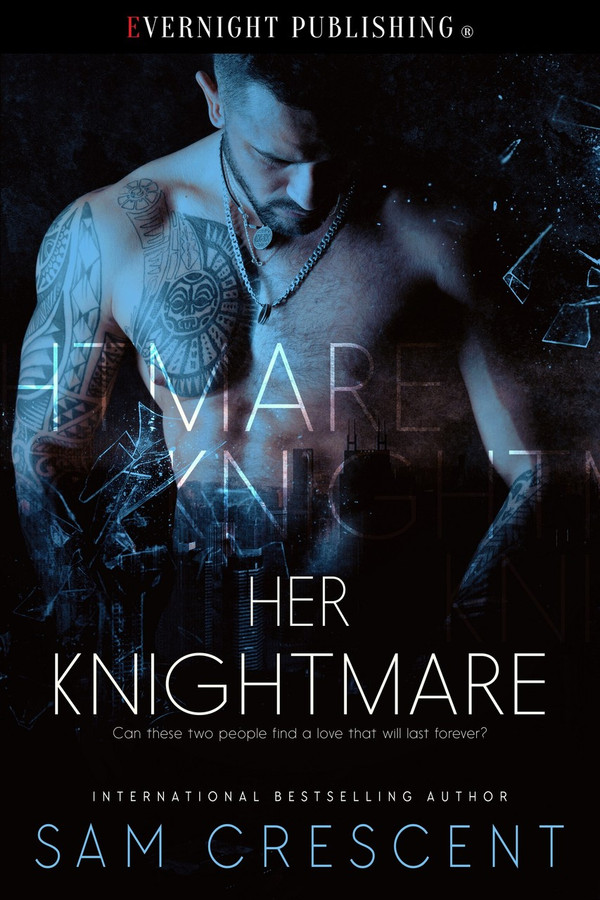 If Dwayne Carson comes for you, you’ll wish for death long before he will let you find it. No one can match him. He has more kills than any other Carson, including his father and uncles. He is your worst nightmare—but when an eighteen-year-old girl is abducted, Dwayne agrees to save her for a price.

Charity has never been so afraid in her life. Being taken, threatened, beaten, nearly broken, she doesn’t believe anyone will come for her. But someone does. One man saves her from her captors, and she’ll never forget him. But now she’s back in her old world, expected to carry on as if nothing ever happened.

The only person who makes her feel normal is Dwayne. He’s back in her life now, and she can’t stay away. She should be terrified of him, but he’s the only one that makes her feel safe, the only person in the world she trusts. But a crime lord always has enemies, and his life is a dangerous one. Is there room in it for Charity?

Can these two people find a love that will last forever?

With her hand in his, he made his way to the elevator.

“Is this where you brought me that night?” she asked, referring to the night he saved her.

He chuckled. “Have I got a little stalker now?”

“When I’m with you, I like that you’re not always telling me about how I should be or what I should be doing. There’s no pretending with you, and I love that.”

“Your parents love you, Charity.”

“I know they do. They just want everything to be normal, and that’s fine. I don’t feel normal anymore.”

“You are to me.” The elevator doors opened, and he made his way toward his apartment. Opening the door, he allowed her to enter, watching as she pulled her hand away, holding it close to her chest.

Over the past few weeks, he’d found himself getting more curious about her. He expected his honesty to push her away, but nothing he said seemed to do that. She was still here, and nothing seemed to scare her. She saw every single part of him, the good and bad, and still, she was here.

Closing the door, he followed her inside, going to his kitchen.

“Are you hungry?” he asked.

“I can cook you something, pasta maybe, or we can order in.” He held up the Chinese menu.

“I could eat Chinese.”

He grabbed the cell phone and handed her the menu. “Order what you want. Do you want a beer?”

He pulled two beers out of the fridge as she ordered.

“Tell them it’s for Dwayne, and they know what I like.” He winked at her and made his way toward the sofa. Collapsing on the soft throw, he rested his head back and closed his eyes. He loved the calmness that came over him as he listened to Charity while she finished the order. She came into the room, and he opened his eyes, watching her. Her gaze was on his body, and he knew exactly what was going on in her head.

“You want to see me naked?” he asked.

Her cheeks went red as her eyes finally looked at him.

“You totally need to drink, you dirty woman.”

She moved past him, but he caught her wrist and pulled her down into his lap. The way she landed, her hand went to his stomach, and he loved it when she touched him. Staring into her eyes, he gripped her full hip. She’d started to put back some of the weight that she’d lost. He liked that. It meant she was no longer scared or fearing for her life.

“Why don’t you tell me what you want?” he said.

She licked her lips, and he couldn’t help but moan as her tongue peeked out. He wanted to taste her.

Running his hand up her back, he couldn’t think of a single reason why he shouldn’t touch her. He’d been wanting to do this for some time, to feel her against him.

“Tell me to stop, Charity. Tell me to fucking stop.”

Sam Crescent is the Queen of BBW romance and when this contemporary romance easily proves it. My favorite stories are those with curvy heroines and Charity is a lovely, larger lady. But it isn’t who she is, it is simply a portion of who she is and I liked that her size didn’t have a staring role in the story. For me this author rides the fine line between light and dark giving me just enough viciousness to keep me on the edge but balances it with some hot passion and some sweet romance. Dwayne Carson is an enigma. He has no qualms killing but he is so gentle with Charity. He doesn’t treat her like a broken victim, nor does he treat her like a child. He sees her for who she is. I enjoyed how mature Charity was. Even though she had been a victim she did not need my pity as she was handling herself quite well. I appreciated the fact that she knew everything about him, his past, his actions, his appetites and his family. I loved catching up with some fabulous characters I’d met in previous stories. If you love dark, Alpha men and the women who keep them from going too feral this is a must read. The Story: Dwayne Carson isn’t a man you want coming for you but when Charity is abducted he’s the one who saves her. He’s a dangerous man but no else makes Charity feel safer but can life with a crime lord be her future?

This romance book was a bit difficult to read. The author takes the reader to some real dark places here. The hell that Charity goes through is really intense and substantial. Dewayne is no white shining knight. He doesn&#039;t do a lot of good things. He&#039;s the executioner in his dark world but at his core. the part he has kept locked away, that is where Charity touches him. The story within &quot;Her Knightmare&quot; is a journey and it isn&#039;t always full of hearts and flowers. It&#039;s dark, its difficult, passionate, and erotic. This is definitely a book to read.

Amazing story of salvation. Dwayne, scarred by his past, has a dangerous reputation. He works to save women &amp; children &amp; brings hell down on those who hurt them. Charity had a great life. She never worried about anything, never knew danger, until that night. The night HE came and saved her. Now, can two people who know the dark side of human beings, help each other find the light? This is a great story and so worth waiting for. Dwayne is incredible. This is another Must Read &amp; 1-Click!!

From the beginning sucks you right in. It&#039;s one of those books that I could not put down. The story between the characters was written wonderfully . Just totally got caught up and in love with them. Sam Crescent is one of my favorite authors, but lately I&#039;ve been having trouble finding that connection of a book that I just can&#039;t put down. This one however held my attention from the beginning . Great characters and great writing!

Really enjoyed this book. Dwayne is all grown up and deep in the family business. His childhood was dark before he went to live with his uncle. He is given a job to do, something that he is very good at, something that may change his life. Charity has had a good life, but when something happens to change that, can the things of nightmares become her salvation? This is the 3rd book in the series and brings everyone together to tell Dwayne&#039;s story. Give this series a go and you won&#039;t be sorry.

I loved this story about Dwayne and Charity. I had to chuckle when I read this one and realized that Dwayne and his uncles true loves are named Hope, Faith and Charity for 3 real good bad guys. While you don&#039;t have to read Her Beast and Her Monster before this one, you would be missing so much by not reading them. I didn&#039;t like Dwayne when he was younger, but after reading this book I fell in love with him. Charity was fabulous in this book as well, she accepted Dwayne with all his badness. His uncle Caleb is still my favorite of the 3 books but I ended up loving all the guys and gals. Sam hit it out of the park with this series.

I have waited for Dwayne to get his story and Sam Crescent did not disappoint! This was a beautiful sometimes twisted story that I loved!

I had been waiting for Dwayne’s book to come out and for him to finally find his HEA as his uncles did. I love it – the Beast, Monster &amp; Nightmare found Hope, Faith &amp; Charity! You don’t have to read Her Beast and Her Monster first, but it does give you some background on Dwayne. He was kind of a jerk, but I knew he could be more that what he seemed then. He has definitely grown up and is now what I guess I’d call a good bad guy. And I loved Charity, and her total acceptance of him- the good, the bad &amp; the ugly. I really enjoyed the relationship between Dwayne &amp; Charity – not necessarily what you’d expect, yet it made perfect sense to me somehow. Great to also see involvement of the Uncles &amp; their families. Every time I think Sam Crescent’s books can’t get better, she releases something I love even more!

Wow. The little s*** grown into... Well, a nightmare. Lol. I read Her Beast and Her Monster (which btw you don&#039;t need to read before this one, but I so recommend you to do. Not only to see how Dwayne changed from then to now, but because those stories were great.), and though, I wanted Dwaynes book, I wasn&#039;t impressed then by him. But I got a feeling and I wanted to see what he could become. And the boy grown up into something. With a dark side, but still a great man. A perfect knightmare for Charity. And talking about her. I loved Charity for how accepting she was of Dwaynes dark side. It seemed she love him even more for it, because Charity knew she was safe in his arms. I liked to see Beast &amp; Caleb. It was nice to see how they are doing after all these years. It was good ending for this family.

Wow. The little s*** grown into... Well, a nightmare. Lol. I read Her Beast and Her Monster (which btw you don&#039;t need to read before this one, but I so recommend you to do. Not only to see how Dwayne changed from then to now, but because those stories were great.), and though, I wanted Dwaynes book, I wasn&#039;t impressed then by him. But I got a feeling and I wanted to see what he could become. And the boy grown up into something. With a dark side, but still a great man. A perfect knightmare for Charity. And talking about her. I loved Charity for how accepting she was of Dwaynes dark side. It seemed she love him even more for it, because Charity knew she was safe in his arms. I liked to see Beast &amp; Caleb. It was nice to see how they are doing after all these years. It was good ending for this family.

Ruin Her by Sam Crescent