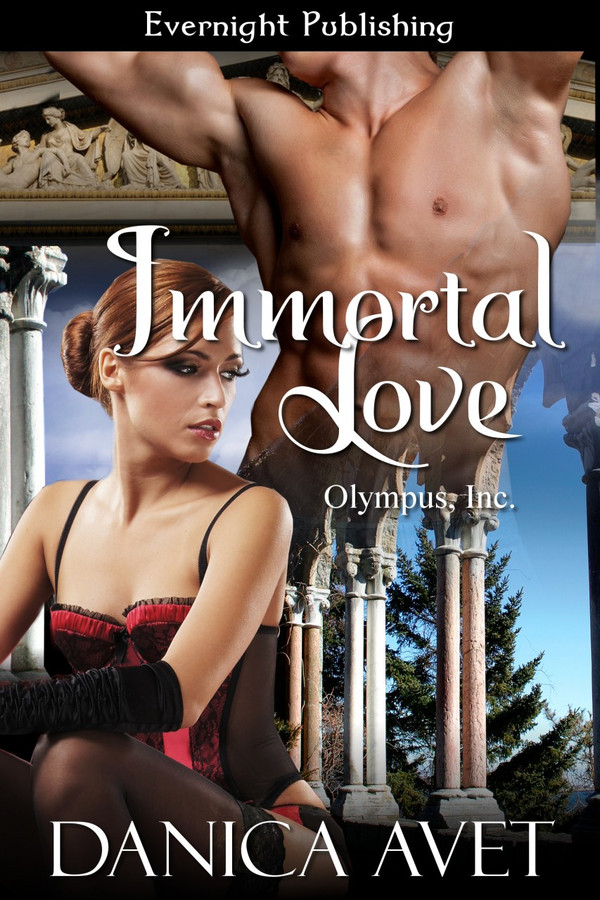 Enforcer Roxana Love works for Olympus, Inc., the corporate face of the Greek pantheon, and knows better than to trust anyone in administration. Assigned to find and protect the newest member of Olympus, Inc., she figures it’ll be a grab and go job, until she discovers her assignment is the same man she slept with the night before. Keeping things professional will be near impossible when she can’t decide if she wants to kill or kiss him.

One night with Roxana isn’t enough for Mason Landry, despite how crazy she seems. However, he isn’t given much choice when he’s thrown through his window, attacked by mythical beings, and told he’s part-immortal. Roxana’s explanation is too fantastical to believe, but if it keeps him by her side, he’ll go along for the ride. Meeting gods and dodging monsters from lore is nothing compared to the fight he’ll have winning Roxana’s heart.

She woke up in a puddle of drool. Roxana made a face. Her mouth tasted like a cat had taken a shit in it in the middle of the night. Ugh. Morning breath. She needed a toothbrush and a gallon of mouthwash. Now.

She rolled away from her drool, throwing her arm out. It landed on something solid and warm. She froze. What. The. Hell. She tried to remember what happened the night before. Yeah, it didn’t take long for the memories to come roaring back. Sex. Lots of sex. With a human! A human who had managed to keep up with her, twist her inside out, and made her come so many times, she felt like they set a world record.

A groan hovered. No, no regrets. She’d needed last night to work her frustrations at Zeus out of her system. And it had so worked. She felt more relaxed than she had in years.

She cracked open one eye and peered around the room. She was in his apartment. Thank gods it wasn’t hers. He was simply too good at making her come to injure by kicking him out of her bed.

Dried spit on the side of her face reminded her she’d been drooling. Drooling! Ugh. She pushed herself up and looked over at Mason. He was flat on his stomach, half of his body hanging off the bed. She looked at herself. She was a total bed hog, and she knew it. She’d probably pushed him that way at some point in the night because she was in the center of the bed with plenty of room. She smirked.

Served him right after that last round of mind-blowing sex.

Early morning light slanted over the bed, caressing his skin like a lover. She could stare at his body forever, but that would not work. She had a job to do. Heaving a mental sigh, she eased out of the bed. He’d been a good lay for the night, good enough to leave her a little wobbly when she tried to stand.

Okay. That never happened to her. She could usually go several rounds and still have enough energy and strength to kick ass afterwards. Mason had definitely been worth the time she lost the night before. Her thighs were stained with her juices and his cum. She sighed. Glad she’d conjured a pack of towelettes when she left the bar last night, she grabbed a few to clean herself. With the way they’d gone at it, it was a damn good thing she couldn’t get pregnant from a mortal. Her body needed immortal seed to conceive. She shook her head with a soft laugh.

She found her four thousand dollar dress crumpled on the floor. Eh, looked like she had another dress to donate to the cleaning service. She waved her hand towards the dress, sending it to her apartment on Mount Olympus. She conjured a pair of distressed Hudson jeans and an Aiko tunic because she’d be combing the streets for Zeus’s friggin’ grandson. She’d leave the panties for Mason. They were her favorite, yeah, but were so torn up she couldn’t wear them again.

Roxana smiled and dressed as quickly as she could. No use hanging around for Mason to get all weepy when he saw the best piece of ass he’d ever had walking out the door. She wasn’t cocky. She’d seen the enthralled look on his face. She stopped to buff her nails. Yeah, she was good. And in a damn good mood after yesterday’s self-pity party.

It took a little longer to find her shoes. She leaned on the bed to put them on, her gaze eating up the sight of a naked, exhausted Mason sprawled on the bed. He was so sexy. She sighed. His skin was so gorgeous, like dark satin poured over steely muscles. Yeah, she could get used to that sight. The scars littering his skin only made him much more attractive to her. She so loved a male who—

She blinked. Shook her head. A little laugh escaped her. She was imagining things, of course. Roxana stood up straight and swung her purse over her shoulder. She headed to the door, pausing in the doorway.

And looked back at the big man on the bed. His head was turned towards her, his face relaxed in sleep. She tilted her head to the left, then to the right. Her heartbeat spiked. No. No, no, no!

Her purse fell to the floor with a thud, but she ignored it as she stalked back to the bed. Upon closer inspection, the scars looked familiar. Too familiar for her peace of mind. The scar tissue on her back and chest itched. No, this could not be happening.

Her legs gave out, and she sprawled on the floor next to the bed. She stared up at the ceiling as her brain swirled with the implications of what she’d done.

She’d had sweaty, dirty monkey sex with Heracles’s son. She was so screwed, she’d be lucky if she could hold her head up at the next inter-company mixer. Her hands curled into fists.

She was going to kill Mason and make it look like an accident. She was an Enforcer; she was good at things like that. He’d never even realize it. The bastard. He’d probably tell his man-whore dad all about her begging him for his cock. Impotent tears burned her eyes as she imagined the hard-earned respect she’d gained over the last two thousand years slipping away from her.

Danica Avet’s latest release, Immortal Love is an enchantingly hot paranormal romance that gives some of my favorite mythology a twist. She has written a fantastic story that takes the basic mythology of Olympus and has created a story that is wonderfully unique. Her characters are intelligent, believable and interesting and her storyline is compelling, fast-paced and flows beautifully. This is a book that I will definitely be adding to my keeper collection and one that I am delighted to recommend to others. I hope they love it just as much as I did.

Road to Love by Jules Dixon