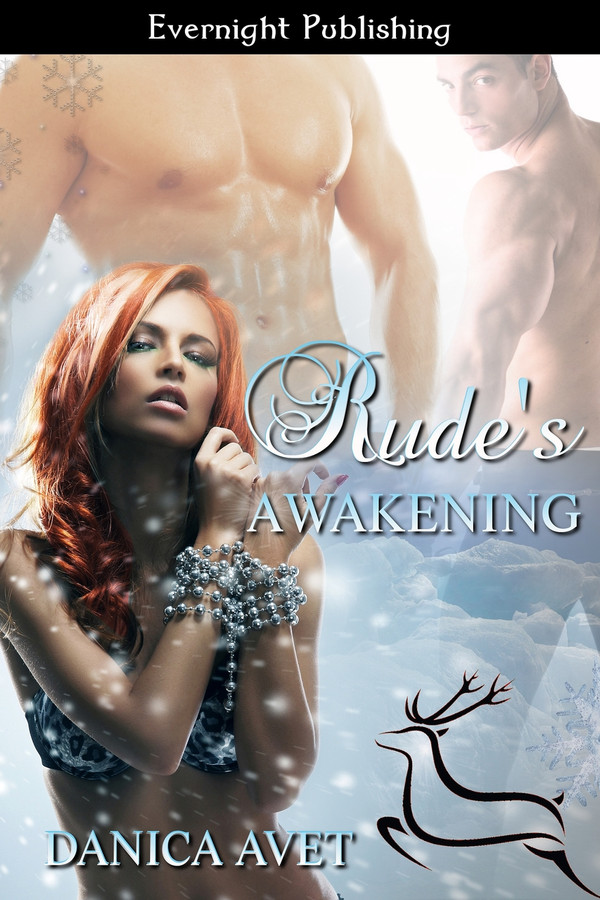 When undercover agent Jinger von Brot discovers a plot against the North Pole, she attempts to alert her superiors only to be captured by the reindeer shifters who protect the royal family. Pack leader, Rudolph “Rude” Briars has a unique way with prisoners, using his skills as a Dominant to seduce the information out of her. As a Domestic Elf, Jinger must fight instincts that demand she submit to him even at the risk of losing everything she holds dear.

Rude’s little elfin spy draws him more than any woman he’s ever had. He should loathe her, but her spirit calls to the animal within, inspiring him to bind her until his name sighs from her lips along with her hidden agenda. But his sweet captive has secrets bigger than the ones he suspects, secrets which have the power to destroy the fragile bond they share and shatter his world.

“Who do you work for, little elf?”

Even his voice became a device of seductive torture, vibrating through his body before spilling into her ears like sweet music. The command in his tone was clear as a winter night. He was accustomed to people doing his bidding. The easy way he handled her suggested most of those people were females.

That thought gave her the strength to force a laugh. “No one. I work for no one, I am no one.” That she wasn’t exactly lying hurt more than anything else. She hadn’t been a person for years. Forced to ignore her more tender emotions, she’d become an animal with a purpose.

He sighed softly, the sound full of…sadness? She wasn’t able to ponder that for long because his forefingers and thumbs constricted slightly, capturing her nipples. Pleasure zipped through her as he pinched tenderly and carefully, tugging and rolling her sensitive nipples until she writhed in his hold.

She shook her head in an attempt to block out the pleasure, but every time she made some leeway, he pinched or tugged harder, jerking her mind back to the present. Someone panted hoarsely and she really wished they’d stop. The sound made her think of raw sex when she was trying hard not to succumb to Rude’s enchantment.

A glance in the mirror showed she was the one panting, her mouth hanging open as she struggled to breathe. Jinger’s teeth clicked when she slammed her jaw closed. Hectic color marked her cheeks, her eyes were wild and glassy with lust, and the tips of her breasts had gone from their usual bright red to the deepest of black cherries.

When undercover agent Jinger von Brot attempts to alert her superiors of a plot against the North Pole, she is captured by the reindeers and subjected to Rudolph &quot;Rude&quot; Briars&#039; unique form of interrogation in this scorching paranormal romance. With the temptation of his little elfin spy, Rude&#039;s having a bit of trouble denying that he wants to claim her. The readers can&#039;t help but be tempted into being naughty as Rude uses dominance to uncover Jinger&#039;s secrets. Reindeer Games have never been this fun before or this hot; there is lots of scorching D/s chemistry between Rude and Jinger. But Jinger has some issues with being submissive that causes quite a bit of emotional turmoil and her secrets could shatter Rude&#039;s world, keeping the readers on the edge of their seats in this well written, fast paced and smooth flowing plot full of suspense, passion, and strong, bewitching characters. The world is a fun and sexy spin on the whole North Pole idea with some interesting traits and I do believe that if I visit the North Pole in Danica&#039;s Avet&#039;s unique world, I might not ever come home again because I don&#039;t think that I could ever get tired of these sizzling Reindeer Games and sexy reindeer shifters. - See more at: http://erotic.theromancereviews.com/viewbooksreview.php?bookid=20730#sthash.3TK7eDDi.dpuf

Jinger von Brot isn’t your normal North Pole elf. For what now seems like forever, she’s been an undercover agent keeping watch for plots against it and the royal family. But this latest plot is serious, so she returns to the North Pole to alert her superiors. Instead, she’s caught by the reindeer shifters who guard the royal family and who think she’s the threat. Suddenly she’s caught waiting for her superiors to return, which means she’s left to pack leader and dominant Rudolph “Rude” Briars unique brand of interrogation. Jinger not only has to fight her instinct to submit, but Rude is finding himself drawn to the little spy that he should despise. The only question is — who’s will is stronger as Jinger tries to hold out until her superiors return so that they can stop the plot against all they both hold dear? I loved this book. It’s one of my favorites I’ve read. The dynamic and heat between Jinger and Rude is off the charts. Not to mention this short book is packed with a great story and lots of hot scenes to go with it. I’m really excited that this is the first in a series and I can’t wait to read more of this unique world of the North Pole. My only caution to readers is that this book definitely has scenes of BDSM and if that isn’t your thing, then you may not enjoy this book as much as I did. But if you enjoy that in stories then this is a must read for you.

Here’s a fantasy for you – not only do you get the major hunk guys (who can shift into reindeer, by-the-by), capable of sexual feats and endurance heretofore unknown, but you get to do this at the North Pole with Santa, et al. What could be more fun? Jinger, our heroine, is a rare, virtually royal and highly prized Domestic Elf in this realm. By birth, she is destined to be a submissive; by choice, she left her world to become a spy working for Jack Frost and Claus in an effort to determine the source of death threats against Claus. Evil doers chase her until she must re-enter the North Pole to escape. Rude, head of security, and his brethren (you know them, Comet, Dasher, Dancer…..) find her, and we’re off on a rollicking good tale. As a famed flight attendant once said to passengers on an extremely rough flight, ‘grab your nuts and hold on to your drinks, we’re in for a bumpy ride’. So goes our story as Rude attempts seduction as an interrogation technique, and Jinger shows herself to be extremely resourceful in resisting and attempting escape. Her resistance doesn’t last long, however, and she is soon falling in love with Rude, and he with her. Hot, hotter, then hottest sex ensues, and you’ll have to find out the rest of the story for yourself. I plan to move right on to the second in the series as soon as possible.