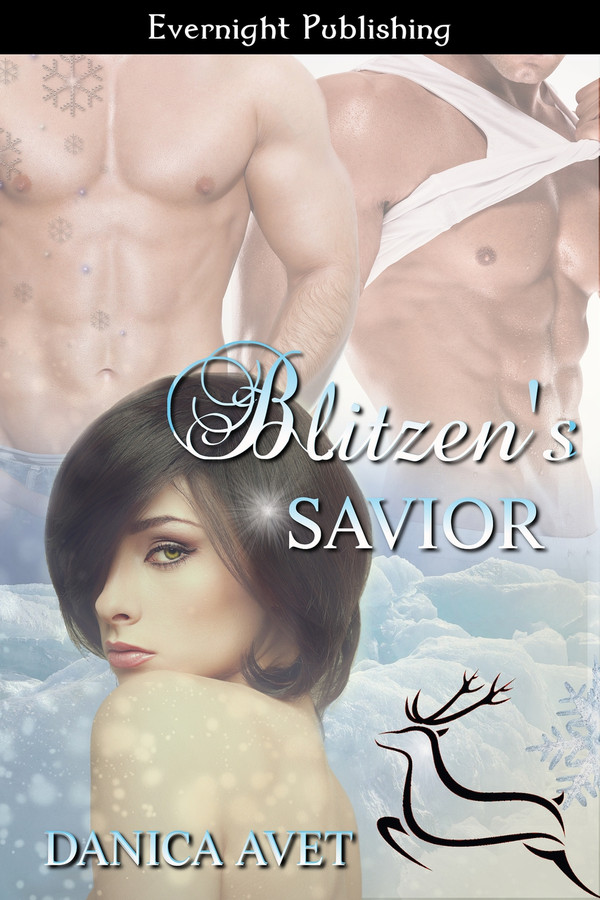 Masquerading as a young male and keeping to herself, is how Alera Darktear has been able to survive in the Outer Plains—the wasteland between North Pole City and the Drow stronghold . But when Blitzen Hightower literally falls out of the sky, everything changes. This dangerously sexy shifter makes her want more than the barren cold and loneliness she's grown accustomed to. He teaches her about desire, need and what it means to be owned by a male, but their time together is finite. Isn't it?

The female who saves him isn't what Blitz expects to find in the frozen Outer Plains. Alera defies all stereotypes he and his fellow Tactical Force members believe about their enemies. Her kindness and generosity—with her home and her body—weaken his resolve to keep their interaction strictly about sex. Not even warnings from his brooding brother can tame the feelings he develops him. Danger stalks them at every turn and it'll take an act of betrayal before Blitz realizes he'll risk everything for this amber-eyed beauty.

Blitzen wasn’t sleeping. He was bathing, his naked skin glistening like gold satin in the pyre light. His back to her, his muscles bunched and flexed as he ran a soapy hand over his chest and arms. Alera’s mouth dried when he moved lower, her imagination filling in the gaps as he cleaned his stomach and groin. Nipples tightening into hard, sensitive peaks, she could only gaze hungrily at him when he turned slightly toward her, angling his body beneath the shower spray.

He looked up as he rinsed off, his brown eyes locking on her like heat seeking missiles. His hands moved over his torso and stomach in a leisurely pattern before dipping between his legs.

“Hey, Al,” he said easily, flashing a smile. “Hope you don’t mind me taking a shower.”

Eternal Fathers! She shook her head dumbly, mesmerized by the sight of his hand on his cock and balls. He was huge and very erect.

“You have a nice set up here,” Blitzen said conversationally as though he didn’t have a massive erection. Then he looked down with a laugh. “Sorry. It’s been awhile since I was with a woman.”

He leaned over to pull the cord to turn the shower off and stood there, water beaded on his body like diamonds. He grabbed a towel, drying himself with quick, economical movements that left her reeling with arousal. He walked out of the bathroom, toweling his hair. He hadn’t bothered dressing and Alera feared she’d swallowed her tongue.

“Hope you don’t mind if I don’t put my uniform back on right away,” Blitzen continued as he stopped in front of the fire. “It’s a lot warmer in here than I’m used to. Besides,” he said with a smile aimed at her, “we’re both guys so it isn’t like I have anything you haven’t seen before.”

I wouldn’t bet on that. Alera cleared her throat and crouched to pick up the sack of barely, hoping her face wasn’t as red as it felt. “It’s no problem.”

“You have dark hair.”

Startled by the sudden announcement, Alera looked up to see he’d moved closer to her. His eyes studied her closely, something warm flickering in the brown depths.

“I dye it.” That’s what she told anyone who ever asked about the dark-haired Drow boy. The pitch black hair had been a gift from her pixie mother, but Drows were supposed to be all white and light and male.

Hello, she was a freak.

“Interesting. May I see all of it?”

She eyed him suspiciously, trying to fight the breathless feeling in her chest. He was up to something, but his voice had been polite, his face inscrutable.

“It’s quite warm in here; you have to be smothering in all those layers.”

It was hot, but if she started shedding layers, he might see her figure and he’d know she was female. Would it matter to him? He had been aroused by her in the grave and he was erect now, possibly because he thought she was male. If he knew she wasn’t, maybe he’d give her some room to breathe.

Alera pulled the cap off her head, intentionally baring her short, black hair to another person’s gaze for the first time since her mother died. It was only a couple of inches long now, but in three months’ time it would reach her hips and she’d lob it off again to sell in Virdian City.

The shifter’s lips parted slightly as he stared at her. She smothered another snort. He probably thought she needed to cut her hair and that’s why he looked so surprised.

She glanced down, her gaze falling on his erection which bobbed in front of him. He gave no notice to it, like it was completely natural to stand naked in front of another male. Alera couldn’t be as blasé. Her cheeks heated.

One of his big hands came up to cup her chin, forcing her to look back at his face. His dark eyes seemed black and color crested the rise of his cheekbones. He looked dark and dangerous and sexier than any man had the right to be.

Blitz didn&#039;t expect to find a female in the frozen outer plains much less one that not only saves him but one that weakens his resolve to keep their interaction strictly about sex in this merry paranormal romance. Only by masquerading as a young boy and keeping to herself has Alera Darktear been able to survive. The reader can&#039;t help but get pulled into the story as Blitzen Hightower literally falls out of the sky, changing everything. The story is full of sizzling chemistry and scorching sex scenes including some BDSM and m/f/m scenes. This well written, fast paced and smooth flowing plot is also full of suspense, excitement and romance. The strong, captivating characters steal the reader&#039;s hearts with the emotional turmoil of the predicament they find themselves in and spine tingling tension and intrigue ensure that the readers can&#039;t put the story down as danger stalks them at every turn. I have to say that this story turned out to be a bit different from what I expected. I love the reindeer shifters and the fascinating elements that Danica Avet gifted her series with and the fascinating spin to the North Pole. I haven&#039;t read the first one yet, but Alera and Blitzen&#039;s story not only ensures that I will, it also has me looking forward to the next one. - See more at: http://erotic.theromancereviews.com/viewbooksreview.php?bookid=20505#sthash.LUfo6Q1F.dpuf