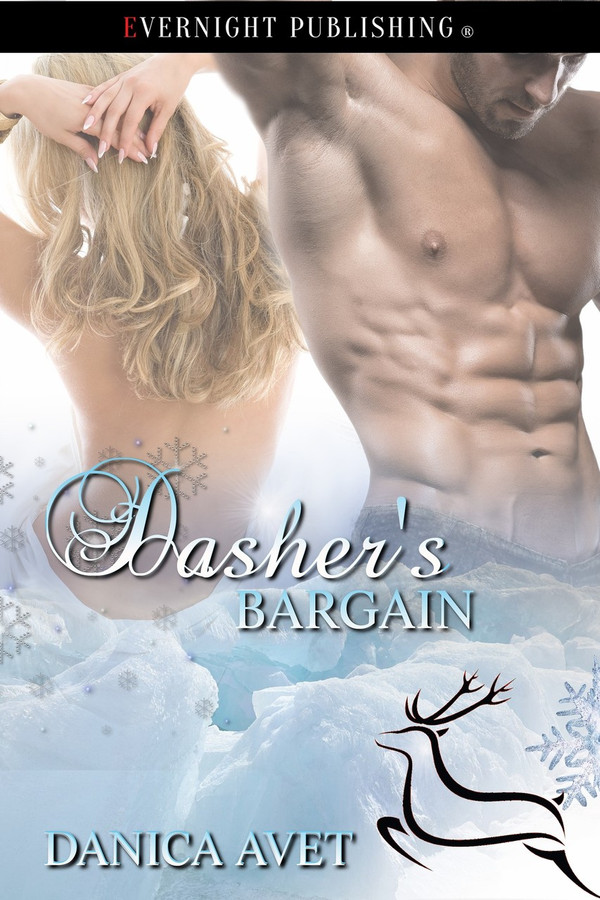 Everyone in the North Pole territories knows Lady Grim as the right hand of the evil Lord Grinwich, but what they don't know is that she's just a human woman who wants to go home. Desperate times call for desperate measures and she'll make a deal with the Devil to leave Virdian City. Or, rather give her complete submission to a wrathful, highly attractive reindeer shifter she accidentally wronged.

Dasher Hightower takes the little scientist's deal. What better way to exact his revenge against her than to make her want him so much it hurts? But Lady Grim's innocent reaction to his touch enthralls his beast and the thirst for revenge turns to the desire to mate, even if it means going against his own people. He'll learn there's no greater battle than the one fought for love, especially for a male who doesn't feel he deserves it and for a human female trying to run from the ghosts of her past.

“Grim,” Dasher said sternly, holding her tenderly. He didn’t know what brought on this nightmare, if she had them every night, but he didn’t like it. His protective instincts flared to life and he used every ounce of authority he had to wake her from it. “Grim, wake up now.”

Her mind responded just as sweetly as her body did when he’d ordered her to come, except this time her acquiescence wasn’t accompanied by the scent of arousal, but of agony. She blinked, her eyes dazed from sleep before she closed them again, another tear slipping down her scarred cheek.

Once again, Grim made his battered heart ache. She didn’t seek him out for comfort, didn’t attempt to use his obvious pain to help her cause. Instead, she hid herself from him, turning her face away as though she were ashamed of her tears. She didn’t just make his heart hurt, she fucking broke it into a million pieces.

“What do you dream of, Lady Grim?”

He should let it go. Knowing more about her, finding out what ghosts haunted her sleep would only make it harder to turn her over to Rude. But he couldn’t bear her silent torment.

Again, she shook her head, her lips sealed tight.

Dasher wouldn’t let her shut him out. He hardened his tone. “That was a direct command, Lady Grim. I told you when we made our bargain, I would find out whatever information I required from you. I’m giving you a chance to talk now, or I’ll find out a much more pleasurable way. For me.”

Her bottom lip jutted out, but the stubborn female held fast to her secrets. That was fine with him. The unrest in his own heart and soul needed an outlet, and he knew just how to release it.

Releasing her, he rolled off the pallet to his feet. Grim lay supine before him, her hair a cascade of gold spread over the dingy brown blankets. She’d put her chemise back on after their last bout of fucking, something he’d allowed because she seemed to treasure her modesty, but now questioned. He couldn’t be soft with her, not entirely. She’d been raised in a hell, had been beaten and tortured for only the gods knew how long, yet she’d still maintained her sense of self. She wasn’t a weak female, not by a long shot.

“Very well,” he said casually, as though it didn’t matter if she confessed her pain to him or not. It shouldn’t of course, but it did and he wasn’t going to let her know. That was his secret.

The foolish female relaxed, even turned on her side, giving him her back, dismissing him. He shook his head, begrudging amusement lifting his lips. She thought because she’d taken him into her body that he was under her power. Oh how little she understood shifters and him.

His cock hardened. This would be a lesson they’d both enjoy. Eventually.

The Billionaire's Bargain by Sam Crescent