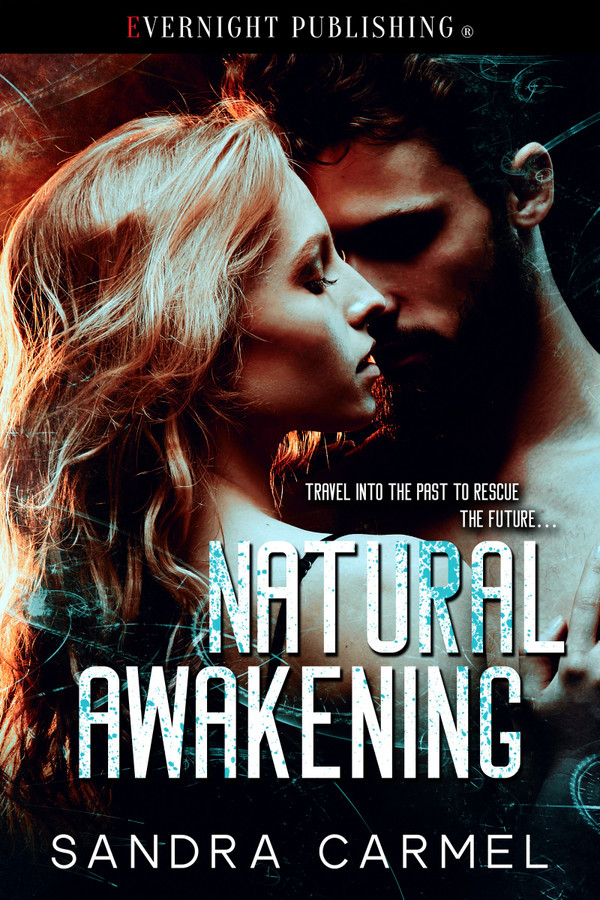 Travel into the past to rescue the future…

Brook, a nature-loving scientist from a bleak future, develops a time travel tablet to investigate organic farming practices from the past. But just before she leaves, a necromancer curses her with a sleep and travel spell to move her into another time every four weeks, for eternity. During her pressured journey of discovery, she stumbles across Sawyer, an orchardist specializing in Biodynamic and Organic Agriculture, and falls in love.

Before their precious time together runs out, can they break the evil spell and save the doomed environment?

The persistent bleat of Sawyer’s mobile phone alarm shook him from sleep. He really needed to change the annoying tune. But it did its job. Not much else could drag him out of the depths of suspended consciousness.

He rubbed his eyes, threw back the covers, and stretched. The chilly air sent a domino of goosebumps along his naked body. Yet his infinity heart-shaped birthmark defied the cold, growing hot and itchy—an absolute and unexpected first.

Normally it just sat there, doing nothing except marring his otherwise perfect skin and reminding him of his mother’s premature death. He scratched the bloody, cursed blemish until it hurt.

After a quick shower, he rubbed some aloe vera onto the blasted annoying blotch, but it didn’t settle down. No one in his family had anything like it, as though fate had special plans for him and stained his skin with his very own, unique marking. He had avoided tattoos and escaped injury and sickness-related scars, had evaded markings in every other way except through his genetically branded skin.

Dressed in his well-worn work jeans, black t-shirt, and Akubra hat, he strode outside to check on the beehives. He crossed the yard, detouring past his buckwheat crop, the lemon and orange trees, through the apple orchard, and stopped.

At the foot of the oldest, most magical tree, a pale, beautiful woman lay asleep in amongst the fallen, white blossoms, her honey-colored hair fanning across the gnarled roots.

A jolt of blinding white heat engulfed Brook’s body and her eyes snapped open. Where was she? Her orientation fog dissipated like mist in the early morning sun. Forest floor, Red Hill, 2019. She sat up and patted herself all over, her sheer lacey dress still intact, her heart still beating an erratic, post-transition rhythm.

“Can I help you?” A strong, deep masculine voice dripped over her like chocolate-coated decadence.

She gasped and glanced up, a gorgeous man crouching before her. A dark-brown-haired, sage-green-eyed cowboy, going by the hat. And whoa, what a delicious specimen. She should really add him to a human-male-from-the-past species sample list but … no time. She hardly had a moment to focus on her nature project.

“Are you okay?” He used that speak-right-to-her-sex voice again.

She took in a long, restorative breath of salt-tinged sea air. “I think so.”

“Are you hurt?” he asked, real concern in his eyes.

He scratched his left hip, extended his large, calloused hand, and covered hers in a firm, warm grip. “Sawyer. How did you get here?”

His electrifying touch sent sparks straight to the birthmark on her right hip. “I travel for a living.” Time travel to be exact.

“I’m a scientist, a researcher, really. You?”

“An orchard owner … and scientist of sorts. What are you researching?” He picked up a handful of white blossoms. “Let me guess—apple farming?”

His forehead crinkled in what looked like surprised disbelief. “Organic? Really? That was my specialty.”

“Yeah. Long story. Did Leif send you?” He studied her with squinted eyes, a wary, thick blanket of tension suddenly descending over them.

She could feel her forehead crumple with confusion. “Who’s Leif?”

A broad, relieved smile broke out on his handsome face and shattered the strange friction. “Never mind. Where are you staying?”

“I hadn’t quite worked that out yet. Can you recommend somewhere close by?”

“There’s plenty of room here.” His gaze dropped to the ground, and he swallowed, his Adam’s apple bobbing in his throat, like he’d shocked himself by his suggestion. Redness flooded his cheeks. Could it be from shyness? Embarrassment? Maybe he thought his offer made him come across too eager and he’d scare her away.

Sawyer swallowed again, still staring at the grass. “If you like, I could show you what organic processes I’d had in mind for the farm. How long before you leave?”

I’d be happy for you to show me your organic processes in a hot-slick-bodies-between-the-sheets kind of way. Maybe she should snatch some time to do her own personal mating research? She did have close to a month. “Four weeks.”

“Right. Um… If you stay at the house, it would give us the opportunity to cover a fair bit.”

He glanced at her, his lips curving into a sincere, satisfied smile. “Let me help you up.” Before she could reply, he’d lifted her effortlessly into standing. She stumbled, still a little weak from the journey and fell against him, her hands slapping his taut, t-shirt-covered chest, her pelvis pressed to his.

Searing heat shot through her right hip where it connected with his left. It couldn’t be, could it? Activation of her soulmate selection birthmark. She’d spent months traveling through time, and it was the first hint of it.

His stunned stare summed up her total surprise. Could he feel the connection too? “I’ll show you inside.” He stepped back and looked around, a furrow of concentration on his forehead that she ached to soothe away with the pad of her thumb. “Do you have any luggage?”

Sawyer caught her ogling his lickable lips. She tore her gaze away, suddenly finding her large, leather handbag super interesting. She patted the smooth, cool surface, unable to stop the heat rising into her cheeks. “I pack light.”

He reached for her hand and held it, as though it were the natural thing to do, and led her up a gravel path. A cream, Victorian-style homestead appeared at the top of the hill, nestled in amongst a garden filled with colorful blooms. Majestic yet welcoming, it stirred up an uncanny sense of home.

Brook had tried standing, leaving on lights—and dosing up on caffeine, speed, cocaine, every possible stimulant she could get her hands on—to remain awake and stop her enforced travels, but nothing worked. Even when she’d fallen asleep within the hipster guy’s arms back in 1970s Sunbury, she’d still woken up alone in the next new place.

“This is lovely.” So serene, clean, right.

“Thank you. The property has been in my family for over a hundred years.” His nostalgic smile seemed bittersweet.

She stopped at the foot of the porch steps, and he stood close, beside her. “Will your family mind me staying? Maybe you should ask them first.”

“No need. It’s just me now.” His tone said consider this topic of conversation off limits. Everything about his voice and body language screamed man hurting.

Dance of Love by Sandra Carmel