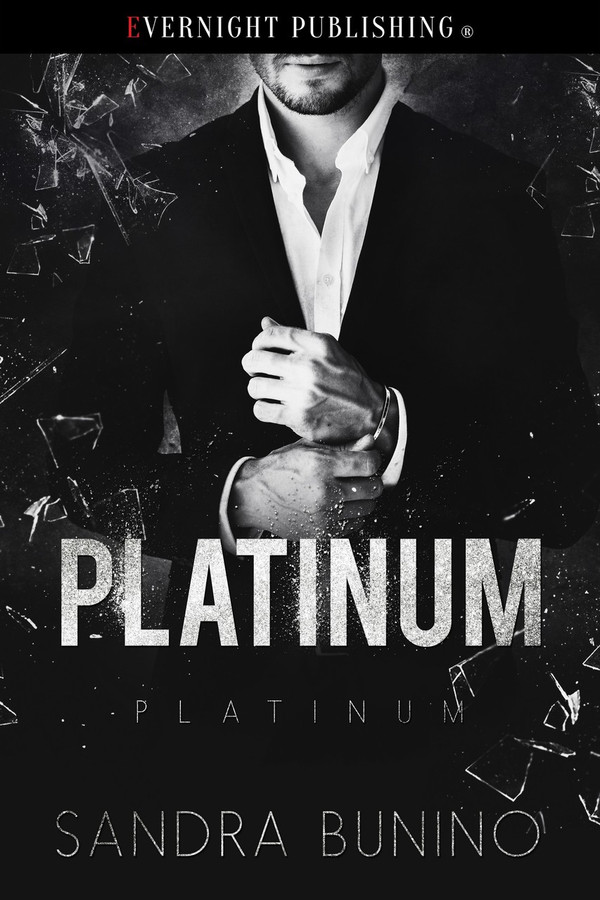 When reporter Stacia Howell follows a hot tip to Vegas, she doesn’t expect to end up running for her life—or to be scooped out of harm’s way by a towering mass of muscle with an icy attitude and a penetrating gaze.

Walker runs on two speeds: Intense and Highly Intense. His plane is emblazoned with the name of the mysterious organization she’s been investigating—Platinum. And a single touch makes her body buzz with the raw desire to lay herself bare before him.

Walker knows Stacia’s game. Hell, he invented the game. She’s oblivious to the danger she’s in. Yet she makes him want to leave his imprint on her skin, and wring sounds of passion from her lips. One night of warm leather and straining chains, and he realizes she is his and his alone. But when he’s backed to the edge of a cliff, the only way to keep her safe could be to let her go. Forever.

“I know you’re there,” she said without turning around. “You were probably watching me the whole time.”

Walker cleared his throat. “What makes you think that?” he asked and entered the room.

“Because it took you too long to find me here and I know there are cameras all over this place. Even here.” She turned to face him. “Especially here.”

He raised his eyebrows in question.

“Isn’t that part of this whole thing? The thrill of being watched?” she asked.

He shrugged. “Not necessarily. At least not for me. I prefer a one-on-one connection. It’s the reason I don’t go to clubs anymore.” He leaned against one of the bedposts. “What else do you want to know?”

She pointed the flogger toward the cabinet. “Not gonna lie. Some of this stuff scares the crap out of me. Doesn’t it hurt?”

He chuckled softly. “Some of it does, but only when the receiver wants it to hurt.”

She paused. “Don’t they always?”

“It may seem that way but no.”

She narrowed her eyes.

“Let’s use this flogger as an example.” He held out his hand. She hesitated for a moment before passing it to him.

Gripping the leather handle, he waited for it to become warm and pliable in his hands. He flexed his grip a few times, and the material creaked and popped under his pressure, sending electricity racing through his body.

Her glance bounced from him to the flogger in his hand. “Okay,” she said after a moment.

Walker pulled open a small drawer in the cabinet and removed a fur-lined blindfold. “I’ll explain everything before I do it so there are no surprises. I want you to close your eyes, and I’m going to slide a blindfold over your eyes.”

She nodded before closing her eyelids. He scanned her face, assessing her comfort level. The telltale signs of stress were a clenched jaw and rapid breath. Stacia’s face was relaxed and her breath even. He lowered the blindfold over her forehead, slowly allowing the fur-lined material to caress her face. “How does that feel?”

“Nice.” A small grin passed over her lips.

“I’m going to guide your hand to the bedpost. I want you to hold it lightly for balance.” He encircled her left wrist with his left hand and helped her find the post. He dropped the flogger on the bed and placed his right hand on her hip guiding her step so her arm was perpendicular to her body. “Keep your arm straight but don’t lock your elbow.”

“Have to be. This isn’t something to take lightly. There’s a certain respect that must be upheld to ensure there are no accidents.”

“Loosen your grip and relax. I’m picking up the flogger now, but I’m not going to touch you with it yet.” He rotated the handle in a circle and the blades whooshed in a hushed rhythm. “Do you know why I was watching you in the monitor?”

“I wanted to give you the opportunity to explore on your own. If you didn’t like what you saw you could’ve left and I wouldn’t have mentioned it. When your curiosity was obvious, I wanted to see what you’d turn to first. Some people love paddles, some crops, but you were drawn to the flogger, which is one of my favorites.”

His body warmed when her grin widened. She was happy it pleased him.

“The flogger can be deceiving. The suede blades can be soft on the skin like a light rain.” He swept the ends over her bare forearm, and she shivered. “But each end comes to a point and when used with any degree of force can leave a sting.” He flexed his arm and gripped the handle as the ends of the flogger slashed over the edge of the bed. The action startled her, but she kept her stance.

“The dominant partner is always in control of the scene. It’s their responsibility to make sure nothing goes wrong, but I’ll let you in on a secret. It’s the submissive partner that truly holds the power.”

“You set the limits and decide how far you’ll go. Your dominant partner can only push you as far as you are ready to go. Pain is only inflicted if you want it.”

Her shoulders relaxed. “Why would I want it?”

“Once you begin this journey you’ll need more. Your body will crave the point where pleasure blends with pain.”

She covered a groan and cleared her throat, which didn’t help his growing erection straining against his fly. He took a deep breath and pulled the blindfold from her eyes. “You can let go now.”

She hesitated, dropped her arm from the post and turned around. “That’s it?”

“That’s the abbreviated lesson. Isn’t that what you’re looking for? Information?”

Her gaze lowered. “I guess so.”

He moved to the cabinet and felt her eyes on him as he returned the blindfold and flogger and closed the doors. “Benjamin made breakfast. I would stay away from the toast, though.” He turned and headed to the door as his heart jackhammered a hole in his chest.

He stopped short but didn’t turn around.

“Is that a question or a statement?”

“I want more.” Soft footfalls sounded behind him.

Walker turned and locked eyes with Stacia, and she closed the space between them. Her palms flattened on his chest and moved to his shoulders. Her body melded to his. He knew she could feel his rock-hard erection as she stepped closer and raised her face to his, never breaking eye contact.

He encircled his palms around her waist, swiveled, and backed her against the wall. Her breath was hot on his lips. “I don’t think so, Princess. It’s too soon.”

She squared her shoulders. “I know what I want. This place makes me feel complete. It’s like a piece of me was missing and I didn’t realize what until now. Show me what I’ve been missing, Walker.”

Whenever I start reading and cannot put the book down it&#039;s a good read for me. That&#039;s how &quot;Platinum&quot; by Sandra Bunino is. The story is about a reporter, Stacia, who goes to Vegas for a hot story about a mysterious organization coined Platinum. This is a huge opportunity for her. It will make her career. Things do not turn out as planned. She is on the run for life when Walker, the main guy, and his 2nd Benjamin try to keep the peace. Will one night of submission will it be enough? I&#039;m loving this series so far and will be getting the next book in the series.

Sandra NEVER disappoints, this book had me falling over an edge and I wasn&#039;t sure I&#039;d return! Great characters that were well blended together. I just may have to reread this one. It is a definite MUST READ!!! You&#039;ll fall head over hill.

*I received an ARC in exchange for an honest review.* I thoroughly enjoyed Platinum and loved the dynamic between Stacia and Walker. She’s a strong willed, spunky female and Walker, well he’s a formidable, serious man...and hot. Can’t forget that!

Exciting, suspenseful, unpredictable romance that kept me captivated. Stacia is working hard to build her career as a reporter which sends her on a lead to Vegas but what she doesn’t expect is to be in the middle of the story. Walker protects his privacy as a member of Platinum. He doesn’t expect to rescue a high-spirited woman that challenges him at every turn. As he works to keep her safe, he finds she is directly connected to his latest project, dismantling the Cardinelli mob syndicate. Lila and Walker are both strong-willed and confident, it was fun experiencing the push-pull that they shared which surprised them both. But will Walker let her into his private circle? I voluntarily read an ARC of this book and this is my honest review.