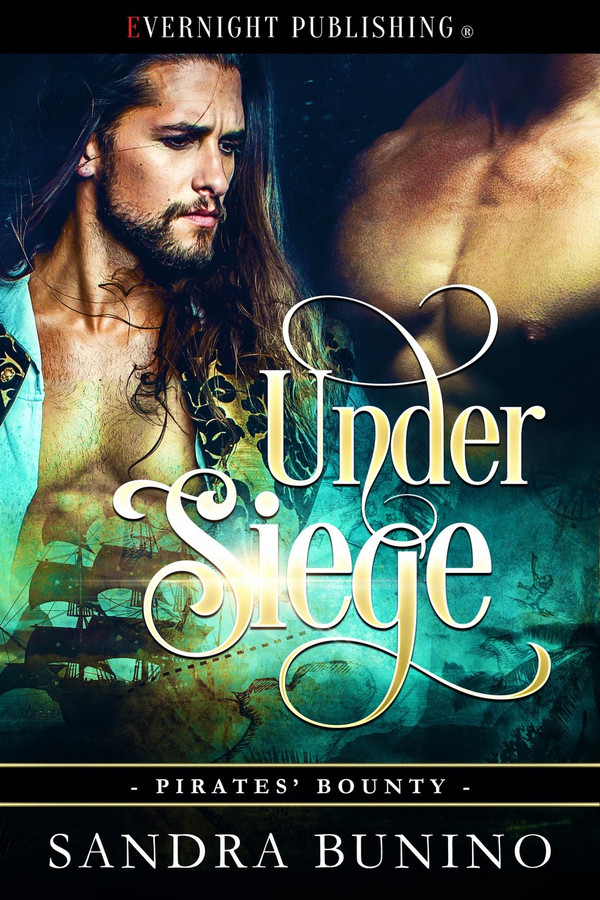 A treasure map forces them together. The past may tear them apart.

John Siege wants nothing more than to find his father’s hidden treasure and put an end to the mystery inked into his flesh. But mutiny and deception ousted him from his own ship, landing him to the lowly rank of a deckhand aboard rival ship, The Black Devil.

Deception is nothing new to Captain Andreas Waite. Finding Siege adrift on the high seas leaves many unanswered questions, but Siege’s appearance aboard his ship offers an opportunity Waite can’t ignore. Soon, passions ignite in a tangled web of rivalry and lust.

Can two pirates surrender to their desires while living under siege, or will the deceptions of the past keep them apart?

“I suggest we start by closing the deal with a handshake of sorts.”
John chuckled. “A gentleman’s handshake? I thought we had decided last night pirates aren’t gentlemen.”
Waite took a step closer to John. “I didn’t say anything about a gentleman’s handshake, Siege. You claim your tastes run toward the masculine. Well, so do mine.” Waite’s gaze trailed down John’s body as his hand came to rest on John’s shoulder.
John lifted his brows. “I’m no one’s bitch, Captain. If you’re looking for a young sap who’s going to drop to his knees and suck you off on command, I’m not your man.”
Waite held his stare as his eyes crinkled at the corners. He squeezed John’s shoulder and the fingers of his other hand drifted over his chest and stomach. John cursed under his breath as Waite palmed his hardening cock over his breeches.
“Your cock betrays your words. The thought of this—” Waite let go of John’s shoulder, grabbed his hand and smoothed it against his own bulge. “—in your mouth interests you, Siege.”
The heat of the other man’s hard shaft begged for John’s exploration as Waite released his hand. John’s eyes remained locked on Waite’s as his fingers loosened the sash at the captain’s waist. “It does pique my interest, but not as your servant boy. I’ll take the position, and your cock, as your equal. I’ll accept nothing less. But this will not earn my trust. Not yet.” The fabric sash fell to the floor as he watched Waite’s jaw clench.
“I’m the captain. My power of authority must remain apparent to my men. However, in here and in my bedchamber, I will agree we’re on equal ground. That’s what I can offer you,” Waite said. “As for trust, that is left to be seen on both sides. Is it not?”
John answered without words. His hand ventured further into Waite’s breeches, reaching for his shaft. Waite let out a deep moan as John’s fingers trailed even further south and cupped his balls into his palm. Waite hooked his thumbs around either side of John’s drab breeches while John rolled Waite’s balls in his hand before encircling his thick cock. “Care to shake on it?” John shot Waite a wicked grin.

Sexy pirates, adventures at sea and treasure. What&#039;s not to like? I enjoyed Under Siege very much. Looking forward to more Pirate adventures.

The high sea, pirates, 2 sexy Captains, a bit of mystery, and treasure to be found. What more do I need to make me 1-click this book? Nothing!! I absolutely loved this story. It&#039;s a true pirates tale with all the &quot;aye, Cap&#039;n&quot; and stories of treasures. Two captains join together in treasure seeking and reluctantly, for one at least, in love. This is a short story and I had no problem completing it in one sitting. This is the first Bounty Book and I hope to get more of Captain Waite and Captain Siege adventures.

Totally hot, swoon-worthy pirates...yes, please! When you have an author you trust to deliver a story that grabs hold of you and doesn&#039;t let go--even after you finish reading--you&#039;re always left wanting more. That&#039;s how it always is with Ms. Bunino&#039;s titles. Even knowing Under Siege was an RotG, I kept glancing down at the % on my Kindle screen and whimpering, saying to myself, &quot;NOT YET! NO! NOT YET!&quot; Believable characters a reader wants to see succeed, settings the imagination can see and smell, the palatable attraction that makes your toes tingle--again, yes please! From page one, I was sucked into John &amp; Waite&#039;s story, and swiped my screen without hesitation until I finished. If you&#039;re in the mood for a couple of hot pirates to spice up your fantasies, this HEA is a must read! *I received an ecopy in exchange for an honest review.

A steamy short story with hot males on the high seas. What’s not to love?! Can’t wait for the next one!

I&#039;m not really into pirate stories but John and Andreas story just pulled me right in from the beginning. I really did like it and read it in just a couple of hours.