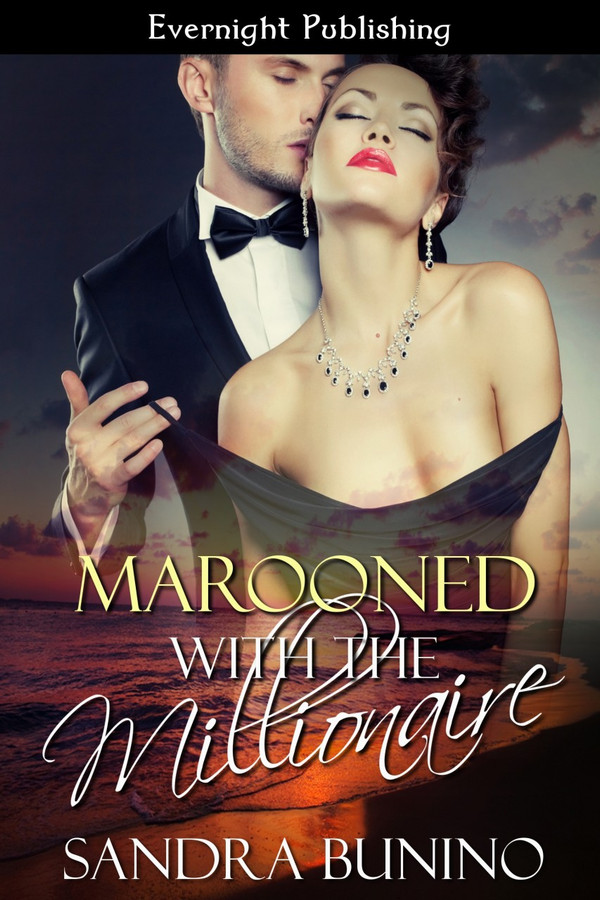 “The chemistry between Stephanie and Jason is electric, white hot, and sensual. This story definitely delivers on all counts of romance and erotica.”
—Liz, Fictional Candy

A fierce Miami storm bring sexy strangers together at The Hotel Del Santos for a night of desire.

Stephanie, still reeling from a failed marriage, needs a break from the past. Shying away from the convention center crowds while on a business trip, she finds solace tucked away in a secluded hotel on South Beach.

Jason, a wealthy Seattle builder, has the worst luck with love. He swears he will never allow another woman to get under his skin, until the clicking of a pair of sexy stilettos across the hotel lobby floor attracts his attention.

Cut off from the outside world, the lives of these two strangers collide and burn with desire when a storm strands them together. Neither wants anything more than a glorious one-night stand.

Their chemistry is undeniable and propels them to a second meeting in Sin City. However, Stephanie soon learns she has more reason to be wary of her mysterious lover than a broken heart.

Previously published as Marooned in Miami. Revised and expanded for Evernight.

Las Vegas. Sin City. A place known for glitz, glamour, excitement and fantasy. It was a premier adult playground where one could pretend to be anything or anyone because “what happens in Vegas stays in Vegas.”

Jason held her hand and gestured toward the lobby with his other. People stared as he escorted her through the hotel to the waiting limousine. By herself, she was exposed and vulnerable, but at Jason’s side she was strong and empowered. Yes. She was in Sin City and Stephanie was going to play the part and enjoy every minute.

“Where are we going?” she asked, sliding into the limo.

“One of my favorite restaurants and I have a surprise for you after dinner.”

“I love surprises, and I have one for you too.” Stephanie leaned over and brushed her lips against his. Her fingertips grazed his thigh and traveled slowly up his leg. A strong hand encircled her wrist at the same time a low growl emanated from his mouth. Her eyes popped open and locked on his darkened stare. The intensity took her breath away.

He leaned over and whispered in her ear. “It’s taking all of my self-control not to take you right here in the back of the limo.”

“What’s stopping you?” she whispered back.

“Damn, we are going to have a fun five days together,” he said in a husky voice, raising his eyebrow.

Stephanie giggled and shifted in her seat as Jason loosened his grip on her wrist and interlaced his fingers with hers. They sat in silence for the rest of the short ride. The limousine turned at the François Hotel and Casino and came to a stop at the private entrance to Le Cote Noir.

The tinkling of piano keys, flickering candlelight and the deep shades of red took over Stephanie’s senses like a soft warm blanket as they walked into the restaurant. “Mr. Royce, it’s so good to see you this evening. Right this way.”

The maître d swiftly escorted them to a secluded table next to floor to ceiling windows overlooking the spectacular view of The Strip.

“I know I said it before, but I’m glad you took me up on my offer and arrived early. We have a lot of time to make up.”

“Speaking of offers, Jason. The clothes, the jewelry, you know I can’t accept any of it.”

Jason reached across table and took her hand in his. “You think too much. Just allow me to take care of you for a few days. Relax and let go, we’ll figure out everything else later.”

Stephanie opened her mouth to speak, but then closed it. She knew it was a losing battle to spar with Jason about his gifts. At that moment the only thing that mattered was that she was with him. It was enough for her. Yes, we will figure the rest out later.

“Are you ready for surprise number one?” Jason asked as the server removed their dinner plates.

He rose and walked to her side of the table. She closed her eyes as a finger grazed the nape of her neck before he pulled her chair out and took her arm in his. She trembled in response to his sizzling touch on her bare back as he lead her through the doorway to the outside terrace. The maître d handed Jason and Stephanie each a glass of port as they walked onto an outdoor patio that jutted over the edge of the building. A cool breeze blew through her hair but she was instantly warmed by a sip of the rich liquid.

“It’s beautiful. I’ve seen the fountains at street level before but never this high up,” Stephanie said, walking up to the railing. She couldn’t actually hear the activity on the busy boulevard from their location high above The Strip, but the intensity in the air was evident. She gazed down at the famous fountains of The Castillo Hotel & Casino.

Jason took the port from her hand and placed the glasses on a nearby table. Stephanie instinctively leaned into the warmth of his palm on the bare small of her back. A sigh escaped her lips as his hand slipped inside the fabric of her dress and ventured lower until his fingertips brushed the top of her ass. The lights on the terrace dimmed and music began to play. A flash of light from the water below signaled a single long spray from the middle of the lake. It multiplied and set off a continuous line of water in the air that moved forward and back with the music. As the water danced in the air, the music’s volume increased. Stephanie placed both hands on the railing. He moved behind her and ran his fingers up the planes of her back and down both of her arms. Continuing his assault of warm kisses down her neck and between her shoulder blades, the tip of his tongue followed the trail back up her neck and stopped at her ear. Stephanie gasped and leaned into his body for support. His arms provided the stability she needed to remain standing.

“My self-control is giving out,” Jason whispered in her ear as his hand inched upward taking her dress hem along with it. Stephanie felt the evidence of his arousal pressing firmly against her back. She tilted her head up to meet his gaze.

The basics - Jason is a wealthy man, and he is in Miami at The Hotel Del Santos after finding his girlfriend in a very compromising position. The girlfriends in his past have all been the same - gold diggers. You can&#039;t really blame him for being a bit jaded when you are constantly thought of as a walking wallet. But then he sees Stephanie. Zap! Instantly he wants to talk to her, to know her, to... you know! Jason follows her onto the elevator, which is not always the wisest place to be in a horrible Miami storm! I really loved Jason as a character. He is clever and charming, just the sort of guy who you think knows his way around a woman. But whats so wonderful about him is that he is also sincere and caring. That pretty much makes him near perfect, right? He takes matters into his own hands, and is determined. Those are all terribly sexy traits! The chemistry between Stephanie and Jason is electric, white hot, and sensual. This story definitely delivers on all counts of romance and erotica, while not being overly graphic in the sex scenes. Even without the graphic content you catch yourself holding your breath as you read. It definitely had enough steam and sensuality to make it interesting! And then their one night stand is over and you want more! They both have to leave town, but will they hook up? I was hoping and wishing!! And I am totally not telling you! Haha! I love this couple and I can&#039;t wait til Lusted In Las Vegas is released, because trust me - it looks like it will definitely live up to the title and its legacy!