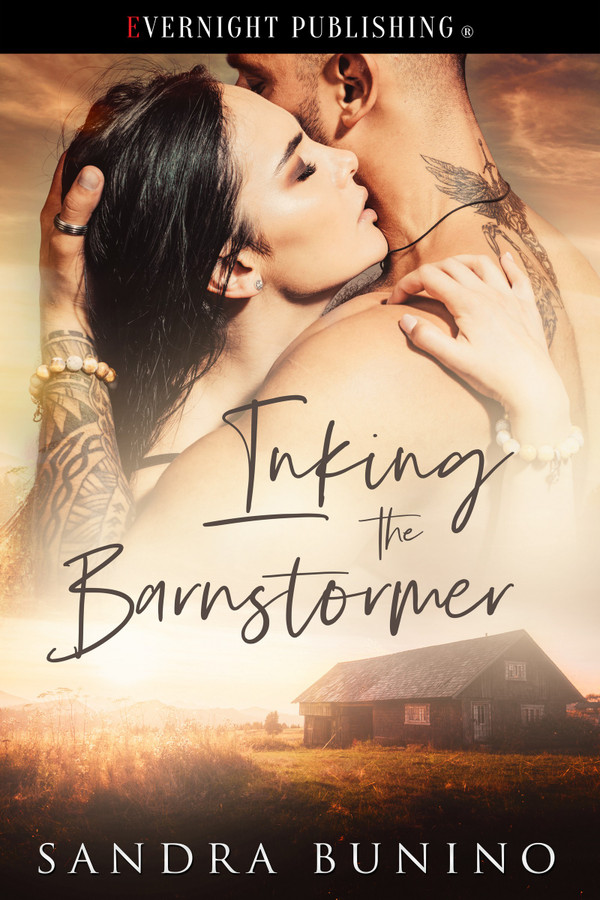 Ace never imagined leaving his thriving tattoo shop in New York City and moving to Dairy Creek, Pennsylvania. But a little girl with pigtails came into his life and he was damned if she’d grow up without knowing he was her dad.

Betrayed and broken, Rachel traded her career of planning the events of Hollywood’s A-list for tearing down old barns and selling off the pieces. The desire to commemorate her new life leads her to a local tattoo shop, but she didn’t bargain on meeting Mr. Tatted, Dark, and Sexy. Her heart was set on avoiding all men and the sexy tattooed variety like Ace were at the top of her “Do Not Touch” list.

What Rachel didn’t expect was the soft gravel of Ace’s voice and his surprisingly soft caress to crumble the walls around her heart, forcing her to face the pain of her past while questioning her future.

Inking the Barnstormer is a stand-alone, contemporary, feel-good small town romance filled with sexy tattooing, hot lovemaking, a marathon tattoopalooza event with a hilarious cast of characters, and a dog named Minnie (or Cujo, it depends who you ask).

He tipped her chin up with his thumb and captured her gaze. “Why now, Rach?”

“You’re all set at the shop. You have plenty of help with Dixie. You don’t need me anymore.”

He shook his head and tucked a loose lock of hair around her ear. “That’s not why you’re leaving.”

She turned around and pulled the plastic wrap from a cabinet drawer. “We’re in too deep, Ace. This can’t go anywhere. You know it. I know it.” She ripped off a piece of plastic film and wrapped the plate. “It’s time for me to go.”

Ace closed the space between them. “Stay.”

“Just until the festival is over. Please.” He trailed his fingertips up her arm.

“Why?” He hooked his finger around her hair tie and rolled it down the length of her ponytail. Her chestnut tresses spread over her shoulders.

Rachel leaned back so her head rested on his chest. “Because of this.”

“This is such a bad thing?” He slowly dragged his fingers to her shoulders and the back of her neck, rubbing small circles under her hairline.

“Yes.” She rolled her head to the side and moaned softly.

His gaze moved to the pulse point of her neck and the heat of her body coursed through him. He leaned over and whispered into her ear. “Because I see this as a very good thing.” He brushed his lips down her neck.

He inhaled. The scent of soap and the lingering aroma of pancakes filled his senses. His parted mouth trailed up to her ear. “A very good thing,” he said before his lips crashed against hers. She turned and wrapped her arms around him as he lifted her body to the counter, stepping closer so her legs were on either side of his waist. She met every stroke from his lips as her fingers raked through his hair. He pulled her tucked shirt from her pants. Her heated skin blazed against his palms. She tugged his t-shirt up his back and broke their kiss long enough to pull the garment over his head and drop it to the ground. She ran her fingers over his shoulders and biceps, eliciting a shiver from him.

“Wrap your legs around me,” he said, lifting her easily into his arms. The heat of her skin surrounded him as he carried her into his bedroom. He laid her on his bed and flattened his palms on the mattress on either side of her face, supporting his weight.

“I shouldn’t. We shouldn’t,” she whispered but her hooded eyes and parted lips spoke the opposite.

He surveyed her face. “Tell me what you want, Rachel. I need to hear it from you.”

“I—” Her fingers trailed up his arms and curled around his shoulders as she tried to pull his body closer.

He resisted and locked his arms. “Tell me.” He wanted to hear the words from her lips.

Her chest rose and fell as her hands moved from his shoulders to cup his face. When he met her stare, her eyes burned into his. “I want you more than I’ve ever wanted anything.”

It was all he needed to hear.

Tattoos aren’t for everyone, and those that have them aren’t necessarily big hairy bikers. Still, Ace is surprised when Rachel enters his shop asking for one that will be large and painful. This reticent woman piques his interest, but will she let him in? This was a great and easy read, with Dixie and Cujo winning my heart. It was especially good to see Lisa with a heart, instead of the one-dimension ‘baddie’ you all too often see. Ace and Rachel are supported by a great cast of supporting characters, and if the author wanted to make a series, I would absolutely love to read Zane’s story! Oh, and JJ, and Gunnar, and… you get the idea. The settings were clear and the choices Ace had to make were exceedingly well-written. I could understand Rachel’s behaviour, even if I didn’t like it. My sympathies were firmly with Ace. All in all, this was a great read that kept my attention. I have no hesitation in recommending it.

Ace only left the New York City tattoo parlor he owns with his best friend Zane to move to Dairy Creek, Pennsylvania because he found he had a daughter with a former one-night stand. He fell in love with Dixie completely and instantly and had already missed her first four years. He knew no matter what he was not missing any more. He opened a tattoo shop in Dairy Creek, but he does not get much business. The small town centered on the dairy business do not seem to be the tattoo type and not very welcoming to him as an outsider. Rachel is in Dairy Creek to salvage some barns due for demolition. She works for herself traveling around and taking apart old barns while trying to sell wood or other pieces to collectors or decorators, that is where the “Barnstormer” comes in, it is the name of her business. She left a successful event planning business in Los Angeles and now she travels around in her truck with her dog, Minnie (or Cujo) for company. Rachel walks into Ace’s tattoo shop right before he closes one evening after having decided she wants a tattoo. Ace is surprised at her request, even though she says it is her first ink she wants it to cover most of her side and is requesting a bird. He finds out she has some scar tissue she is hoping to help disguise. They both feel an instant attraction, but he can tell she is skittish, and she does not know how someone like him ended up in Dairy Creek. Ace volunteers to help Rachel with some of her work on the barn that requires another set of hands and they start to get to know each other. He brings Dixie when he has her and she instantly falls for her. His friend Zane comes to help at the shop for the upcoming Dairy Festival and Rachel steps in and helps organize the shop and the schedule so they can fit in as many appointments as possible. I really fell for this book. The way that Ace and Rachel get to know each other slowly combined with the charm of Dixie, Minnie, Zane, and the other crew from the New York shop coming to help at the festival made it irresistible. Then you throw in Rachel’s backstory and Ace’s baby mama and some STEAMY scenes when Ace and Rachel finally give in to temptation and you have all the components of a wonderful story I will read again.