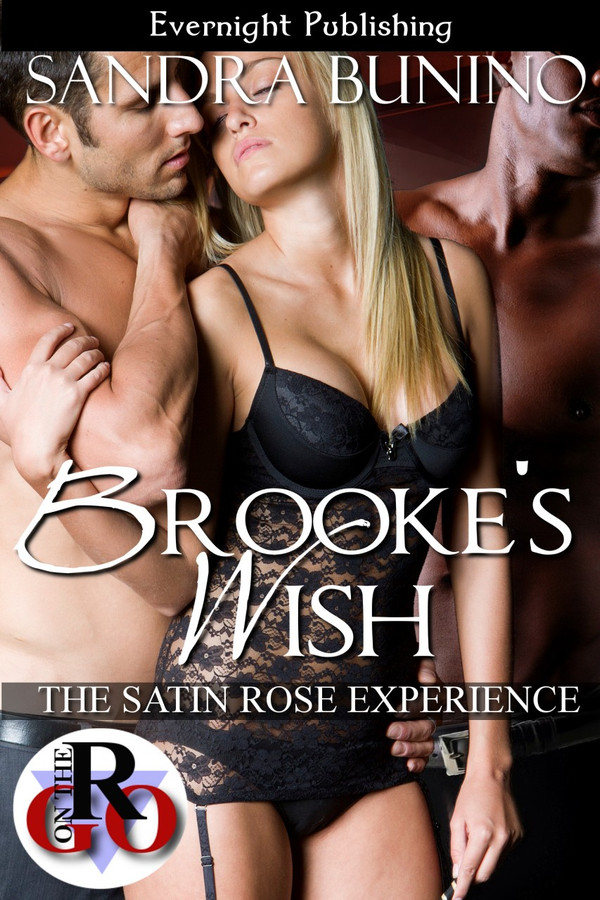 A failed relationship and long hours at her flourishing practice have Dr. Brooke Allaire running on empty. When Brooke accepts a girlfriend’s gift of some holiday pampering at New York City’s posh Satin Rose Experience, she assumes she’s in for a weekend of facials and massages. Brooke soon realizes there’s more to SRE than meets the eye.

Ty Venice is a team player. He’s used to sharing submissives with fellow Dom Jackson Reid. However, if there was ever a game changer, Dr. Brooke Allaire was it. That is, until he gets a glimpse at her ultimate fantasy, to be possessed by two men at once.

Other Books in The Satin Rose Experience:

The Submission of a Mafia Princess

I chose to read this book because I was seeing all the reviews about it and decided to give it a try. It is in a series called The Satin Rose Experience, which I didn’t know when I started reading. So needless to say that there are others in front of this one. I really love the cover of the book and that is another thing that made me want to read it. Brooke is a woman that has helped her boyfriend out and supported him since college. She even did his homework so that he would pass. She goes in with her friend and opens up a medical building. When she does that she realizes that her relationship is going no where. Her partner gives her tickets to a spa and she goes. Let’s just say that this isn’t just any regular spa. The place is called Satin Rose Experience, SRE for short. This place deals in BDSM and acting out your fantasies. Anything that you would normally never do. I would have had the same reaction as Brooke did. I would have been thinking what in the world has my friend got me into? Is she nuts or has she lost her mind? There is no way that I could see myself doing anything like that. When she thinks about it, she starts thinking about having an experience with two men. I can just imagine doing that with two strangers. Even if I did have feelings for them. I enjoyed seeing Brooke just put her sexual fantasies into someone else’s hands. I was taken on an exciting and hot sexual adventure. The only thing that I didn’t like was that I hadn’t had the chance to read the other books of the series. I didn’t feel that I was missing anything. I felt that there was going to be more about Brooke and Ty. I can’t wait to see what will happen next. I really reccomend this book to anyone who has even thought about being in a threesome or thinking about some BDSM. I get to find out all kinds of new things with every book that I read in this category.

A failed relationship and long hours at her flourishing practice have Dr. Brooke Allaire running on empty. When Brooke accepts a girlfriend’s gift of some holiday pampering at New York City’s posh Satin Rose Experience, she assumes she’s in for a weekend of facials and massages. Brooke soon realizes there’s more to SRE than meets the eye. Ty Venice is a team player. He’s used to sharing submissives with fellow Dom Jackson Reid. However, if there was ever a game changer, Dr. Brooke Allaire was it. That is, until he gets a glimpse at her ultimate fantasy, to be possessed by two men at once. The Satin Rose Experience, New York’s elite BDSM club residing on the twentieth floor of Rosebud Resorts, contains ten uniquely themed suites, each with its own story to tell. Fulfill your fantasy at SRE. (Goodreads) Review: This is a story about trying something new. The second installment of the Satin Rose Experience could easily stand alone because we follow Brooke into her first experience with the high end BDSM club. Very short and sweet and not nearly long enough. With only one sex scene, and an ending that will leave you wondering, I don’t feel like the characters connected enough emotionally or physically to establish any long term bond, that the ending gives you hope of. It looks like each installment of the SRE will be someone’s individual experience so we may never know what happens with Brooke or Mia from book one. There were a few grammatical errors and a name switch for a few paragraphs that was distracting, but aside from that and that it needs to be longer to establish more of a bond between the characters, it was a good read. I intend to read more of the SRE as they become available.

Review: What an absolutely decadent way to end our 12 Hunky Days of Christmas! This is definitely one of those books that will warm up a winter night. It&#039;s a quick read with just enough back story that you don&#039;t feel lost. It&#039;s a sexy, satisfying novella that will have you wanting to go back to the SRE world again and again. Ms. Bunino has created a series with just enough kink to fulfill your naughty desires in the best way possible. This book explores the what it&#039;s like to submit to two men who are focused on nothing but bringing you pleasure. Now if that isn&#039;t a Christmas gift then I don&#039;t know what one is!! So if you are looking for a way to explore your fantasies and you like your tension to be of a sexual nature then Brooke&#039;s Wish should be on your list!

It has all the elements. A friend who will go the extra mile to give you what you didn&#039;t know you wanted. A very hot, southern gentleman who will cater your every fantasy. And a fairy godmother in the form of Mia, to make sure you get the most out of this experience that you never knew you needed. This is one of the most satisfying short stories I have read in a long time. I was taken in from the first page. I was right there at SRE. Ms. Bunino described the scenes so perfectly I was drawn into the story as if I were Brooke. I LOVED it. This story was a sensual feast for the senses. It was nicely developed and we even got to catch up a little with Mia, from the first SRE story. I really feel like I got to know the characters and cared what happened. If you are looking for a sexy, fun read to squeeze in between house work and car pool, then this is the story for you. It will whisk you away to an elegant resort where you every wish is fulfilled. You can take a trip to New York, be pampered, have hot sex and be done just in time to get the kids from school. What more could you ask for? So what are you waiting for?

Brooke&#039;s Wish is the wicked side from Sandra Bunino I hadn&#039;t seen. Brooke is on her way to NYC for some well deserved time off, away from her day-to-day busy life. She no longer has a boyfriend but she&#039;s not brokenhearted, it&#039;s not like the guy was even worth keeping. She&#039;s actually relieved things are over. She&#039;s ready for a new start, and what a better way than to pamper herself. Brooke is SO looking forward to her weekend away. She can already see herself in the spa enjoying a massage. There&#039;s a spa all right, but the massage she&#039;s planning for is not exactly what she&#039;ll get. When Brooke realizes her friend set her up for a weekend of dark pleasures, Brooke wants nothing more than to wring her friend&#039;s neck, but the dark pleasures SRE has to offer are too tempting to ignore. Then, there is Ty. A man with the sexiest southern drawl. And let me not forget Jax. Mmm... his chocolate skin is as delicious as chocolate itself. Ty and Jax are close friends, and when I mean close, I mean &quot;close&quot;, as in they &quot;share&quot;. Do I have your attention? Brooke happens to befriend them and has second thoughts about SRE. It may actually BE the best place she&#039;s ever been at. This is a wickedly steamy read. Sandra Bunino surprised me with Brooke&#039;s Wish to say the least, and I more than enjoyed it.