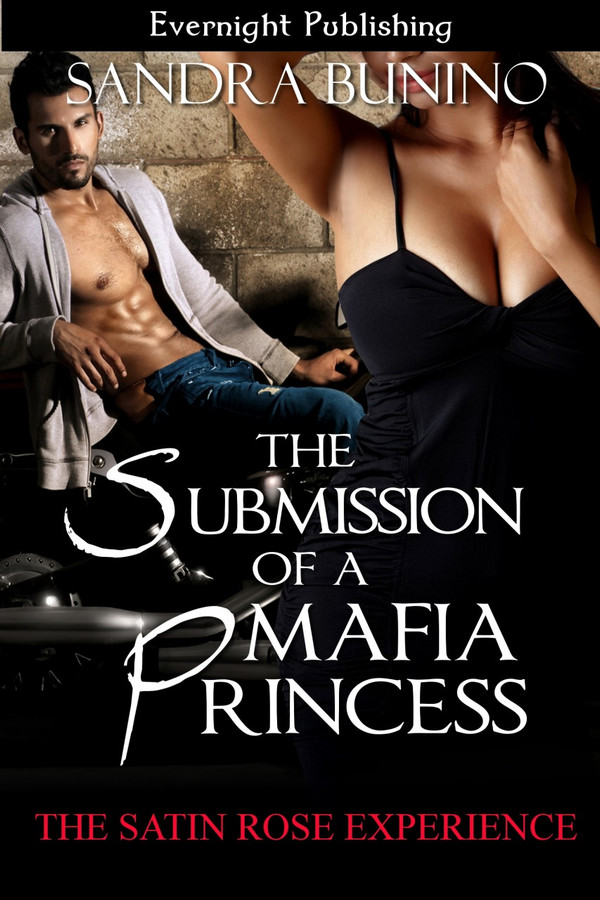 Duty, Respect, and Honor thy Family...

As the only child of notorious mob boss, Tony “The Chief” Azzari, Antonietta lives her life by this mantra. Toni never questions the world where decisions are made for her, until she meets Harley-Davidson riding bad boy, Braxton Malone. Ever since their fiery first kiss all those years ago, she can’t deny the desire to submit to his control.

Brax always knew he’d be walking a dangerous tightrope if he fell for Toni, but like a moth to a flame, he couldn't stay away. Barely surviving the wrath of the mob within an inch of his life, a scorned Brax has vowed never again to allow a woman under his skin.

Footsteps approached the opening of the dressing screen. Toni reached behind her back and grabbed the corset ribbon ends. “I can’t believe I even have this on. Would you please tie the laces?”

The ends were taken from her hand and pulled snug. Before the strings were tied, the ribbons were carefully smoothed and tightened from bottom to top. Fingertips grazed her spine before a bow secured the corset in place.

“Beautiful,” a voice whispered. However, instead of Mia or Francine’s voice, this was husky and masculine.

Toni twirled. Her hair whipped around her face until her eyes settled on the owner of the mysterious voice. “Brax,” she said breathlessly.

“Hi there, I hope you don’t mind me joining the lingerie party,” he said with a crooked smile.

“Crap. No, I mean yes, I mind. I didn’t want to put this getup on in the first place, let alone have anyone see me in it,” Toni sputtered as she tried to grab her robe.

“I can’t imagine why. You look amazing. Have you seen yourself?”

Brax’s eyes shifted to the bench behind her. “You left the best for last,” he said and jerked his head toward the black silky stockings folded on the seat. “Sit,” he ordered.

She followed his glance to the bench and then returned to his face.

“There’s no going back now,” he said and quirked his eyebrows.

He had a point. She may as well go through with the entire charade. Shrugging, she shuffled her feet and sat on the bench.

Brax knelt at her knees and reached for the pair of stockings. He patted his thigh, signaling Toni to lift her right foot and placed it on his muscular leg. He found the opening of the stockings and bunched them with his thumb and forefinger to the foot of the stocking. Toni pointed her toe and slipped her foot inside. He pulled the silky stocking over her calf and stopped at her knee. Their eyes locked as he reached under each of her knees and gave them a swift tug so that her ass balanced on the edge of the padded bench. He continued pulling the stocking up to the top of her thigh. Finding the other stocking on the floor, he performed the same act on her left leg.

“Stand,” he said roughly and cleared his throat.

Without taking her eyes off him, she stood and watched as he pulled the clips from the bottom of her corset and secured the stockings.

“You’re good at that,” she said smiling.

He chuckled. “I’m going to bring you out to the mirror. No peeking.”

Brax held her hand and brushed his fingers up her back. Toni’s feet stayed planted.
“Come on, trust me. You’ll be pleased. Keep your eyes closed until I say to open them.”
Toni took a deep breath and allowed him to lead her out from behind the privacy screen.
“Inch up a little and I’m going to slip a pair of heels on your feet. Good. Open your eyes, gorgeous.”

Toni squinted, afraid of what she’d see. Her line of vision started with a pair of silver heels.

She continued her glance upward to a pair of legs she almost didn’t recognize. Damn! Are those mine? Her eyes opened wide, taking everything in. The corset fit perfectly and hugged every curve of her hourglass shape. Glancing at the tiny triangle of leather at her mound, she silently thanked the spa attendant who talked her into the Brazilian wax.

“I’m shocked. I don’t know how, but this getup works.”

“I think you’ve been told things about yourself your whole life and took them for fact. This is all you, sweetheart. You’re sexy as sin.” Their eyes met in the mirror. “Check out the back.”

Toni scooted around and looked at her reflection in the three-way mirror. She followed the crisscross of the ribbon from the top of her back to the dangling ends tied neatly at her bare ass. Only a thin band of leather covered her full ass cheeks, making them starring features. Her glance moved to Brax in his black leather motorcycle jacket and warmth flooded her belly.

“Now do you see what I do?” he asked and trailed his fingertip down her arm.

“I don’t know about that but I’m thinking it’s a keeper.” She giggled.

She turned once they returned to the other side of the privacy screen and waited for him to pull the ends of the bow. Instead, he grasped her shoulders and led her back to the bench.

She twisted her head and met his stare. “What?”

“Your safe word.” His eyes bore through hers and stoked the embers burning deep in her core.

She complied, and his hands moved to her stocking clips. Four snaps sounded before the silky fabric slinked from her legs and was replaced by warm hands traveling up the inside of her thighs. Hooking his thumb around the scrap of fabric at her waist, he yanked the G-string off in a fluid movement. Warm hands were back at the sensitive skin of her inner thigh as he pushed her legs apart. Moving closer, he blew a light breath over her exposed folds, eliciting a quick tremble and making her whimper for more. He growled as the swirl of his tongue sent waves of heat through her core. Toni opened her legs further and leaned backward until her back rested against the wall. Clamping down on her thighs, he lifted her legs slightly off the cushioned bench and continued to intimately reacquaint himself with her slick heat. She closed her eyes and moaned deep as the tip of his tongue circled just outside her bundle of nerves.

“Look at me. I want to watch you come undone.”

Her eyes flicked open. “Please don’t stop,” she said in a voice she didn’t recognize. It was throaty and desperate. She was transported to a time when her life was simpler, a time when all that mattered was Brax and the love they shared.

“Touch yourself,” he commanded.

Other Books in The Satin Rose Experience:

The Submission of a Mafia Princess

If you love a sexy alpha who wears leather and drives a harley then Braxton is the man you need. His one taste of love did him in so now he just deals with women who want a Dom and that is it for him. I can understand where he is coming from. Why chance it when you had the big mafia boss after you? Tony is always hating her body and is tired of people not treating her like someone just because of what her last name is. She finally finds the man she wants and loves her for herself. Braxton helped her find what she needed and it was all taken away from her in one night. As I was reading this book I was imagining myself in the book. I just had the imagine of Cocktail come into my mind while the author described Braxton at the bar making drinks. It just mad the story more real for me. I could just see myself setting at the bar and watching a sexy man make me a drink. Braxton and Tony brought out the spiciness in each other. Neither one could live without the other and they had tried. I am so happy to say that I have read a book in this series before and they just keep getting better. Every time I read a book about a BDSM club I always learn something new and it makes me want to act it out if only I had the nerves to do it. I would love to just lay back and leave it all in my lovers hands. To know that I was the one he wanted to be with and he would do everything in his power to give me the best sexual experience I have ever had. If you love a great alpha male that will think you hung the moon and will do whatever he has to, to be able to keep you then this is the book for you.

‘The Submission of a Mafia Princess’ is the third book in The Satin Rose Experience by Sandra Bunino. Toni is the only child of a mob boss. Her father has run her life until she meets Braxton Malone. Braxton knew it was very dangerous if he fell for Toni, but he did not care. Braxton barely escaped with his life and vowed never to get that involved with a woman again. Braxton is a top Dom at a local BDSM club. Toni wants to fulfill a fantasy before getting married to a man she does not love. Toni was a remarkable likeable character despite how she was raised and who her father was. She has body issues due to being belittled because of her size by her father. Toni is forced to marry a man she does not love because that is what she is supposed to do and is not given much of a choice. She does it with such strength and dignity. She is broken hearted at the loss of her first love. Braxton fell for Toni the first time he saw her despite who she was. He is has a great balance of sweet, tender man and hard Dom. The chemistry between Braxton and Toni was off the charts. The sex scene was super-hot and steamy. Overall, this was a great addition to the series. This book was very well written. I loved this book. My only grip was the book was too short! I cannot wait to see what the next book is about.