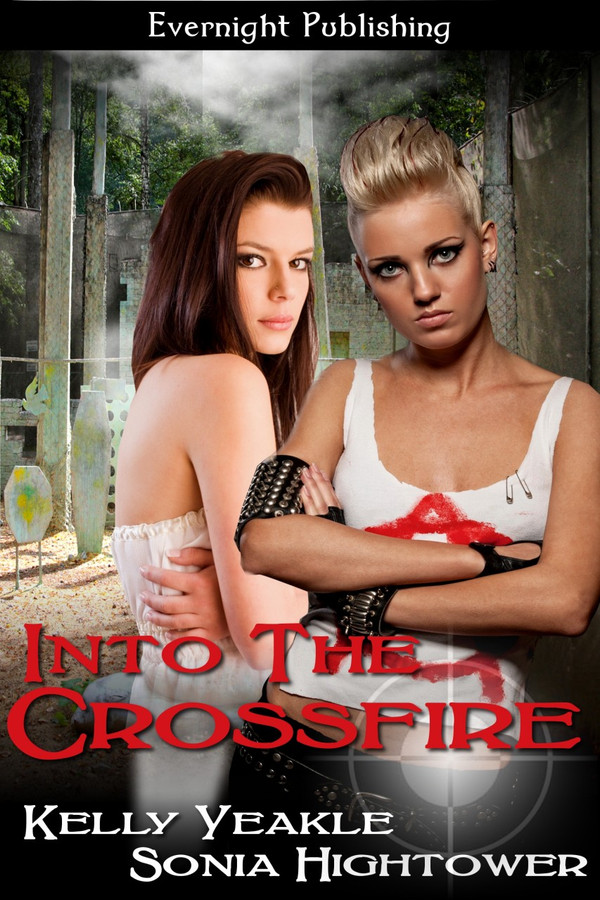 Sasha has never been one to follow the rules. Though society is changing around her, she refuses to give in. No one is going to take away her happiness. But as a cult takes over the government, places a president of their choice at the helm of the country, and changes all the laws to suit their whims, Sasha finds herself changing too...her heart anyway. And she finds herself forced to make a life-changing decision.

When she saves the timid Peyton not once, but twice from an overly aggressive boyfriend, they have no choice but to run from the law. While sparks fly and a political war ensues, Peyton must figure out who she really is: a woman with a mind of her own or a woman brainwashed?

And into the crossfire, they go...

I go where I please. Sasha reached under her jacket and undid the button flap securing her weapon before pushing open the door to the forbidden room. The scene in front of her halted her in her tracks. That lovely young girl, legs spread, skirt up, tear-streaked face, and that…jackass trying to shove his dick in her.

Sasha wasted no time. She grabbed her gun, eliminated the distance between her and the offending scene with four long strides, and aimed it at his head. Her voice left no doubt as to her sincerity. “I didn’t fancy having to do this twice, asshole, but put your little weapon away and leave the lady alone, and I’ll put mine away too. Otherwise…well…you don’t want to know.” The sudden silence was punctuated by the sound of her gun safety clicking off. “And trust me, my weapon is a hella a lot more threatening than yours.” She snickered, winking at the open-mouthed girl on the table over the perpetrator’s head.

The man stiffened. He lifted his hands and stepped back slowly, his flaccid penis hung over between the hole of his boxers—long boxers. Sasha blinked as she registered his odd underwear, but her gun hand didn’t waver.

“You won’t get away with this.” The man’s words were all bravado, but his voice was high-pitched with fear.

Sasha looked at the girl, now pulling her skirt down and inching of the table. She was shaking, poor thing. “Do you wanna have some fun with this fucker?”

The girl blinked. “Wh-what? I j-just…thank you.” She looked down. She was a nervous wreck if the hand wringing and tremors were anything to go by.

“I could shoot him in the balls. You know, make sure he doesn’t do this again. I tend to be very good at shooting crotches. I practice on a daily basis.” Sasha kept her tone matter-of-fact. She peered back at the man. His mouth was agape, his eyes wide. “Put it away or I shoot it off.”

The man didn’t move. He seemed frozen with shock. His gaze went from her to the girl and back again.

Sasha sighed. This is going to be more difficult than I thought. Where the fuck is that stupid, prissy librarian lady? Does she just ignore screams in her employees only room? “Anyway.” Sasha shrugged and lowered her arm till her weapon was aimed at the man’s limp and shriveled junk. He didn’t move, but a trickled of sweat was running down his forehead. Sasha felt a small measure of satisfaction. “I’m waiting for your command—what’s your name again?”

“Peyton.” Sasha stepped forward until her gun touched the man’s cock. I’ll have to give this a damn good cleaning. Outwardly, she struggled not to wince.

The smell of ammonia rent the air as yellow liquid dribbled on the man’s pants around his knees. Peyton giggled. Sasha grinned. “Well…put it away when you’re done with that then, but be sure not to get any on my boots. I’m mighty fond of these boots and they cost a pretty penny.”

Into the Crossfire is a fast paced, intelligent and eye opening story. While I don&#039;t usually read FF books, this one caught my attention with strong heroines and intriguing plotline.