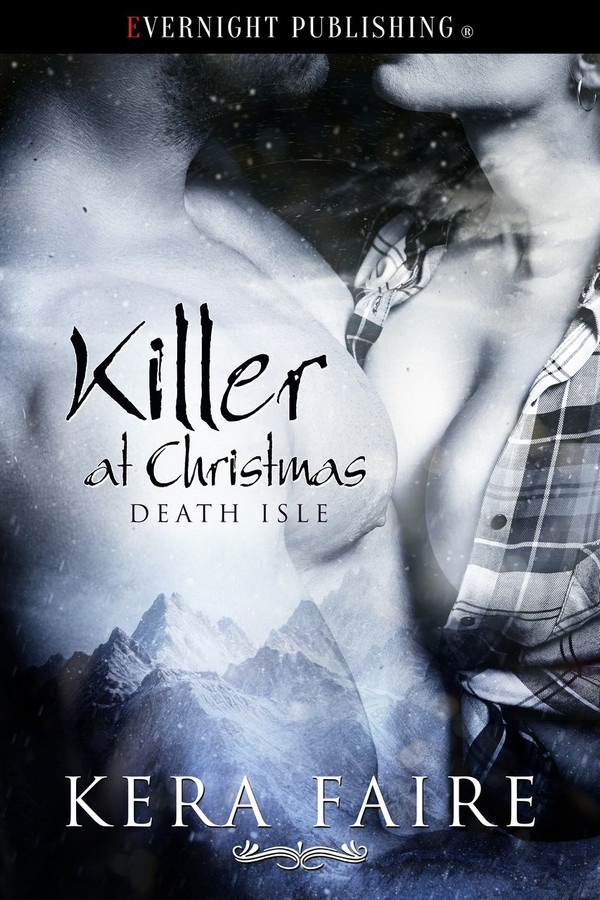 A killer and a hooker? An unlikely mix, especially at Christmas.

Rio Buchanan, a government operative, and member of the Dispatchers specializes in seduction. He just never thought his target would be his ex-wife. Andie might be a hooker now, but there’s no way she’s a traitor. There’s only one way to get to the truth—kidnap her to keep her safe.

Andie doesn’t know what to think when Rio disrupts her life again, let alone when she wakes up in a prison cell shackled to him, and not in a fun, kinky way. The secrets of his job already ended their marriage. Will they now end her life too?

Imprisoned on the Death Isle, they have to work together to catch a traitor, and discover if they can forge a new life together.

Rio, short for Lothario. Not that he used that on a job. Don—short, Milo had told him, for Don Juan—Ron, Jon, Len…. Something easy to remember. Never Rio, which was at least better than his given name, something he refused to divulge. Well except on his application form. So far Darke hadn’t held the threat of it being shared over his head. So far.

Darke shook his head. “We’re not like that and you know it. Best person for the job every time. You’re it.”

“Why for fuck’s sake? ’Cos I can screw secrets out of the best of traitors?”

“Not just that, though I’ll say you’ve well earned that title.” Darke’s voice held more than a hint of mischief in it. “You’re the best at drugging and strangulation. After me, of course. But yeah, you do screw well.” He winked. “Take that how you want.”

What was the bastard up to now? “Chief screwer? Jeez, thanks.”

“You’re welcome. But in this case there’s more than having a creative, eager and willing cock.” Darke paused for effect and stared at Rio, unblinkingly. “She’s linked to the guy we think killed Marlene.”

“Yeah, just after you left, I reckon.”

Rio gave a brief thought to the late Marlene. She might have been annoying but she didn’t deserve that.

“We’re still hunting out his name. No Hogg anywhere. We did find some incriminating photos and a cryptic message scrawled on one of them. ‘You know what to do’.”

Darke inclined his head. “It ties in with the whispers we’ve been hearing about the most unexpected people, both women and men suddenly, how shall I put it…servicing the last person on earth you’d ever think to see them with and then, oh-so-conveniently”— he sketched quote marks in the air —“committing suicide with an appropriate note somewhere easily found, saying they were ashamed of themselves for giving in, or some such thing.”

Rio whistled. “Is it likely? I’ve not heard?”

“It’s been kept hush-hush, as a lot of the “victims,” if not all, are well-known and respected in their field.”

“Exactly. And now it’s coming closer to home. The target is someone you know. You’re her ex.”

“You what?” Rio sat down on the bench with a thump. “Say that again—not the cock bit—the rest. Maybe tell me just who I’m about to screw senseless, drug and extract the truth from. I’ve had more than one ex. And is it linked to me in some way? If I was the last one to be with Marlene.” Although the way his stomach churned, he was damned sure there was only one answer he’d get. “The blond haired guy I saw? Fuck. I knew I should have hung around.”

“That wasn’t your remit, so don’t go having a great big session of remorse. Do what you’re told and get out.”

“So, hit me with it? Which ex?” And if it was who he thought Darke meant, that one was a big fat, non-negotiable not in a million years will I go anywhere near her. Plus, if he did, a bunny boiler would have nothing on her, he was damned sure of that. “I’ve never screwed anyone in a fucking cell. So why me, and with who?”

“You’ve only had one wife unless you lied on your recruitment form.” Darke rummaged in his pocket and pulled out an apple. “One who is now targeted by someone we believe to be this mysterious Mr. Hogg.” The first crunch sounded like a death knell. “And I know you haven’t…Fernan…”

“Okay enough already.” Well, it had to happen one day. What on earth were his parents on, to call their newborn Fernando Giles Wilfred?

It had to be a dream. A lack of caffeine and nicotine induced hallucination. No way was Andie involved in anything underhand or shady. Hell, she’d even taken back the fifty pence bar of chocolate the supermarket cashier had forgotten to charge her for.

“Never Andie,” he said to Darke, who munched on his apple and eyed him over the top of the fruit. “She’s so straight she…ah hell fuck it, it’s not her.” Rio shook his head. “Anyone but.”

“Then if you’re so sure, it’ll be a doddle won’t it? You’ve got a week to get her here. Then it’s as long as it takes, if you don’t mind spending Christmas day in a cell. File on the table, the paper sort, not the metal get out of jail variety, plane tickets, don’t forget your passport, here’s something you might need, you fly tomorrow.” He threw a package across the room and Rio caught it automatically.

Condoms. He might have guessed. “I always practice safe sex, it’s the only way.”

“Yeah, well we’re not all loved up with a doll like Ingrid,” Rio grumbled. “Hold on, tickets? I fly to… why the hell am I off to tits and bum city if I’ve got to sort Andie out? Then find the fucker who set her up.”

Darke tossed the apple core in the bin and stood up. “Didn’t I tell you? She’s working there. As a hooker.”

Rio had him by the throat before he realized what he was doing.

The door crashed open and Mac dived in and prised Rio’s hands open. “Enough you asshole, give over now.”

“He fucking said that Andie is a hooker.” Rio fought Mac like a maniac. “No bloody way. I won’t believe it.”

“He’s winding you up.” Mac pulled Rio off Darke, flipped him over his hip to the floor and stood on him. “You asshole: look at his face.”

“Rearrange his pretty boy features more like. Andie is not a bloody hooker, no way.” Rio took as deep a breath as he could with Mac’s foot on his chest, and stared at Darke. He could see in his expression that Mac was correct in his surmise.

“Why?” he asked wearily. “Why make me so mad I could have killed you?”

Darke shrugged. “It seemed like a good idea at the time. You’re still in love with her and won’t be subjective. That’s no good. I did wonder. You’re off the case. I’ll send someone else.”

Not a chance. There was no way he’d let anyone else plant their prick in his lady and find out all her secrets.

His lady? Since when? Since forever, he accepted. From the first day he met her. Splitting up hadn’t changed that.

“Over my dead body,” Rio snarled.

Darke inclined his head. “That could be arranged.”

“Yeah, well make sure someone feeds the cat.”

Rio’s assignment to get information from potential suspects is seduction. Right at the point where they can’t think, is when the woman give up the names he is looking for. But his next job, to go and capture someone who could be a traitor might be his worst assignment to date. After years of being with a husband who only kept secrets and never told her anything. Andie had enough so to save herself from more heartache she broke off ties and moved on from the one man she has only loved, Rio. When she wakes one day in a cell chained up she knows something is wrong. The only way Rio could keep her safe was to kidnap her. But until they get any answers from her, Rio couldn’t expose who he really was. But their love for each other never left and she will stay with him forever if he wants

We travel once again to the Dark Isle. Kera Faire’s series about the government sanctioned dispatchers continues, and this time it’s with Rio. Short for Lothario, a.k.a Don Juan, and a few other aliases. Have you guessed what one of Rio’s methods of information extraction is? Other than poisons and strangulation that is. He gets an assignment he’s not to thrilled about. His next target is his ex-wife Andie, who he has to drug and ‘seduce’ information out of. He’s also told that she’s a ‘hooker’ and that she’s also teaching classes. Rio finds this impossible to believe, so he goes and fetches her. Andie left Rio because of all of the secrets. Now, she’s caught right back up in them when she finds herself shackled to Rio. The sparks fly , and misunderstandings make for some pretty amusing moments. This was a short, holiday Dark Isle by Kera that was totally enjoyable. Of course, being in Scotland, there is Scottish slang in the book, but it only adds to the experience and makes it all the more authentic.

Rio thinks that his ex-wife may be a hooker but he really doesn&#039;t think she is a traitor. When he kidnaps her and takes her to Death Isle, things heat up between them again. Andie still loves Rio but the secrets he kept from her about his job tore their marriage apart. Together, they must decide if their relationship is worth another try while trying to figure out who the traitor is. Will Rio finally tell Andie what his &quot;job&quot; really is and will Andie give him a second chance? I loved this book and it is one of my favorite series!! I was thrilled when Kera wrote another one!

The Jeweler by Kera Faire