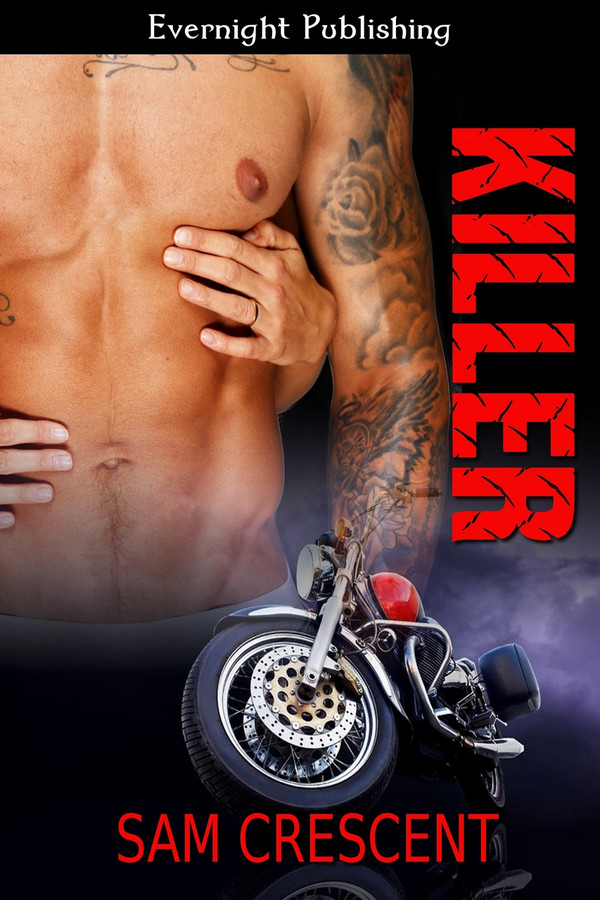 Kelsey is married, and Killer needs to get away from her before he does something he might regret. Losing himself in a drunken night is not the answer, especially when he can’t stop loving her just because she’s off-limits. He confronts Kels to get all the details.

Her world is crashing around her. Everywhere she turns, she feels trapped. Panicking, Kelsey takes matters into her own hands. She would have succeeded, but Killer saves her, acting quickly.

Never before in all of his life has Killer been scared, and he’s even taken lives with his very hands. But seeing Kelsey’s on the brink of death, he knows he has to do something to protect her from the man who calls himself her husband.

It’s a race against time for Killer to protect his woman, as her husband is not all he seems to be. He’s got enemies who are looking for any way to hurt him. Will The Skulls be there for Killer, or will he face his enemies alone in order to protect the woman he loves?

She watched him hold a towel out for her.

“Come on, baby. It’s time to rest.” She stood up stepping into the towel he held out to her.

As she followed him to the bedroom, he dried his hair with a towel before running it over his body.

His body was to die for. Hard muscle covered in ink. She’d always gotten aroused by the sight of him without a shirt, and now she knew what he looked like completely naked. He bent down over the cases, opening each one.

“Here, I imagine you’ll want to put this on to sleep in.”

Catching the sheer nightwear she turned her back to him to dry her body. By the time she’d put the lace on she wondered what the point was. Anyone with good eyesight would see everything she had on offer.

Killer already lay in bed, staring at her. “Remind me to thank Alex when I see him next.”

“That,” he said, pointing at her body, “is fucking perfect.” He lifted the covers giving her room to slide in.

“We’re married. Where else do you expect me to sleep?”

“Right.” She toyed with the rings on her wedding finger wondering how she was going to keep up the falseness.

Sliding under the covers, Killer banded an arm around her waist, drawing her close. She felt his cock rest against her ass.

“You’re not wearing any clothes,” she said.

“Of course not. I never wear anything to bed.” He snuggled in close, his large body making her feel small compared to him. “One day you’ll be wearing nothing at all.”

“Why would I do that?” she asked, feeling wide awake.

Nipples hardening once again, she pressed her thighs together at the sudden heat swamping her core.

His lips were making her nerves stand on end.

His fingers caressed her stomach before sliding down to cup her pussy. “Fuck, you’re burning up.” He pushed her nightgown out of the way to slide a finger between her wet folds. “Fuck.” Killer kept cursing. “Why didn’t you tell me how desperate you were?”

“I thought I did when I offered to sleep with you,” she said, staring at the far wall.

The hard brand of his cock made it hard for her to focus on anything else but his touch. She felt on fire from it.

“We’re not going to fuck tonight, baby. I’ll take care of you,” he said.

His other hand cupped her breast as he worked her clit. She frowned. Killer was going to touch her bring her to another orgasm while she didn’t even get to touch him?

Killer by Sam Crescent is the fifth installment in the Skulls series. Killer is a contemporary biker romance. I love this author and want to read every book she has ever written. I found Killer to be just as good as her other books. I can’t wait to read more books in this series. Killer is Killer and Kelsey’s story. It is the story of boy meets girl they fall in love but girl is hiding a secret that could destroy their relationship. Kelsey has had to deal with a lot in her life. She has had to deal with non-supportive pa rents that constantly belittled her because of her size. She has had to make choices in her life that she wasn’t too proud of but they were what they were. She didn’t plan on ever falling in love but it is too late. That ship has already sailed. Killer wasn’t like any other guy she had ever met and he seems to love her for who she was and her size didn’t matter to him. He made her feel special and loved. She could see spending the rest of her life with him. There is only one problem…she is already married and she hasn’t told him. What will he do when he finds out? She is about to find out. When her husband shows up demanding that she go with him her life turns upside down. She can’t handle it and she does the only thing she can think of to make it all go away. When she come to she realizes that she is glad that Killer saved her but she still doesn’t know what she is supposed to do and she doesn’t know if Killer will forgive her for not telling him the whole truth. Can they get over her past make a future together? Or will the husband she never loved get in the way? Killer fell for Kelsey the minute he saw her. She had all the right curves and she drives him wild. The more time they spend together the more he knows that he wants her in his life forever. She is hesitant at first but he woos her in. Then her husband shows up and his world is turned upside down. She never told him that she was married and now the jerk has shown up. He is really upset about the new development but he can’t help but still want her. When he goes to her apartment he is horrified at what he finds. He rushes Kelsey off to the hospital and saves her life. When he meets her husband he knows that there is something not quite right with him and he is going to find out what it is so that he can save her from him. He is going to do it whether the skulls help him or not. They are all just as upset as he is about her keeping the fact that she was married from him. Her husband does everything to keep her away from him but he doesn’t know who he is messing with. When things begin to go from bad to worse he does the only thing he can to keep her safe. Will he be successful or will her husband be successful at keeping them apart? Can they both get past her deceit or will it ruin them in the end? I really enjoyed Killer. I loved the characters. I liked Killer’s take charge attitude. I like how he would do anything to keep Kelsey safe. I also like that he truly respected her and her desires. I liked Kelsey because she was selfless. She did anything to keep her family safe even though they were not that great and had treated her poorly. I liked what Killer brought out in her as well. Their chemistry was undeniable. I did not like her sleaze ball husband. He was the perfect villain. I enjoyed most of the secondary characters as well. I would recommend Killer to anyone who enjoys biker romances

The author did a great job drawing the reader into story of Killer and Kelsey. It was a fast paced book that kept me interested in both the main characters as well as the other members of the Skulls MC. Killer is determined to be with Kelsey despite the fact that she is married. While others may hold his early actions in the book against him, I viewed it as an outlet for his pain and anger. He was always honest with her and himself early on. He knew she was his and was determined to make it so. Kelsey has endured being treated poorly by her parents and husband. She learned at a young age that sometimes the only person you can trust is your. She is determined to make a life for herself, with the Skulls included, despite her current circumstances. While I enjoyed the book, and the characters, I often times got angry with Kelsey. She kept helping her family at a detriment to herself. Good thing she had the support of a few good friends. If Tate, Sandy and Killer weren’t there for her it could have been tragic. Killer is part of The Skulls series but it can be read as a standalone too. I have yet to read the others in the series but I’m looking forward to reading them.

This was another great book in The Skulls series. As a fanatical reader of the series, I think this one was the most emotional story and my favorite one yet. This book picks up right where the last one left off, with Killer finding out that Kelsey is married. That was a huge set back for him. He doesn’t take it very well, and makes a couple of big mistakes. Yes, I will just say it. He was an jerk. Now, I haven’t been a big fan of Kelsey so far. She never stood out as a vital character like the other ladies in this series. Then as this story went on I found out more about her and I could see why she had such a low opinion of herself. It’s a bad situation with everybody coming down hard on Kelsey. Things go sideways really quickly. I felt that this was the most intense story in the series. Killer and Kelsey had so much to overcome.The complication of a husband who doesn’t want to let go played a big part, but so did past insecurities for the both of them. Then there was the really great part where Killer puts everything on the line for the woman he loves. Lastly, there was the bonds of brotherhood that were put to the test. This one was well written and easy to read. It captivated me from the start. To me, it was about learning to forgive and fighting for what you want. It was passionate with plenty of intense scenes. What’s not to love ? A great story, sexy bikers, and scorching hot love scenes. What can I say ? It worked for me.

I really enjoyed Killer and Kelsey&#039;s story. These two fought their attraction for a long time and I was glad to see them finally get their own book and how these two dealt with everything thrown their way.

Killer in Him by Sam Crescent