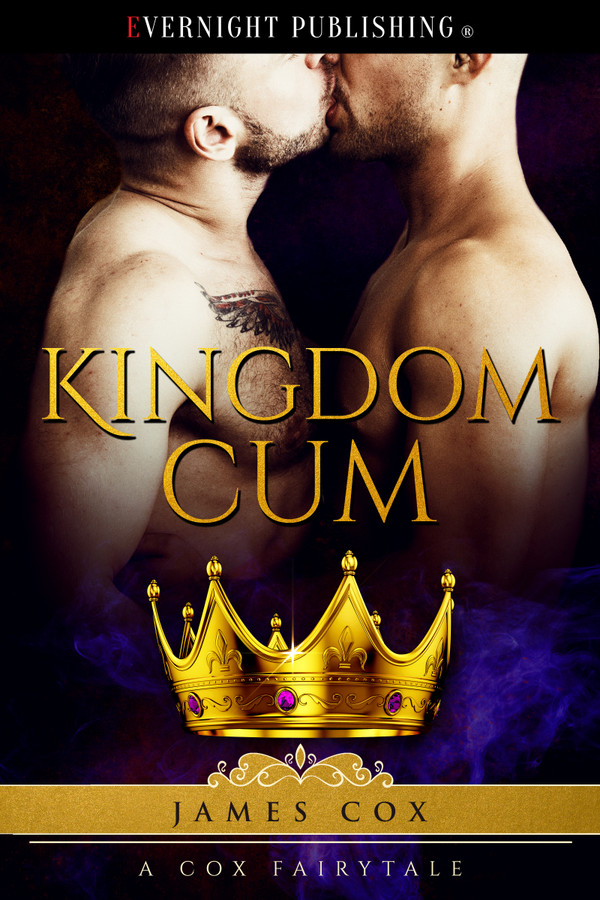 “Fifty gold coins to the man or woman who tries to break the king’s curse. Whoever should return His Majesty’s penis to normal will be named king or queen of the kingdom. Sign up at the castle, servants’ entrance.”

King Midae was beaten, robbed, and raped by the man he thought he loved. Heartbroken, he makes a pact with a witch for revenge, but it comes with a price. Midae is cursed with a golden penis—he can never feel pleasure again. Now, years later, men and women from all over the kingdom use his body in an attempt to cure him.

Only true love can conquer all, but can even love survive if the curse breaker is related to the witch who cursed him?

Silen turned around, presenting an expanse of pale flesh and lovely plump ass cheeks. He reached back, positioned and then slowly lowered.

The tip of the golden cock poked against Silen’s ass. Repeatedly. Was the young man new to such a position? He lowered his hips and adjusted his feet, struggling.

Midae felt an odd sensation. It was … pity. He sighed and pushed Silen’s hand away. Midae grabbed his own cock, something he hadn’t done since the curse. Even when he took a piss, he let someone else hold it. He had no desire to feel the cold gold in his hands. For once, he made an exception. Midae placed a hand on Silen’s hip. “Lower slowly,” he said gently. When Silen shifted, Midae tugged on his hip. His cock tip pierced the barrier, and Silen cried out.

Midae had tried them before without luck, but the stimulation had left him frustrated for days. He gripped both of Silen’s hips and gently pushed at his knees with his legs. They parted a bit, and more of Midae’s cock sank into Silen’s tight hole. He eased the other man up to relieve the pressure. Midae always believed that virgins should be treated gently. Maybe because he was so brutalized his first time. This was not the time to think about that. Midae led Silen back down. A few inches sliding into the tight, warm ass. Bloody hell, so warm. Midae closed his eyes and savored the feeling. He tugged on Silen’s hips, sending his cock a bit deeper. This actually felt … good. Midae’s eyes sprang open. Holding onto that short thread of hope he glanced down to see the gold at the base of his dick was less shiny. Almost, it was almost dull. The edges crumbled, and pieces drifted down to his thighs. “It’s … it’s working.” The words were thick on his tongue. An impossible dream that he thought would never come true. “You’re breaking the curse!”

Silen was gasping as he glanced back with wide eyes. His cheeks were flushed and his lower lip red from the attention.

The. Curse. Was. Actually. Breaking! Midae wanted to scream it from every balcony of the castle. He could feel again, and it was… Midae moaned. He forced Silen down more on his cock. That feeling, that need, was finally conquerable. He was going to burst in seconds.

There was a large crash.

At first Midae thought it was the curse dissolving or his heart bursting. No, the wall before them exploded. It sent the throne flying backwards. Silen rolled over Midae’s head. Just like that hope was lost, and the battle was on.

It’s been a long time since I’ve read King Midas, but even if you haven’t read it or it’s been years, you can still see the parallels between the stories. To a point. James has definitely added his twist to it. It’s a good story. Really good, but I must warn you, there are trigger points to this story. If you read the blurb, you will see the biggest of them. But there is a bad part in the revenge as well. I don’t want to give away the story in any way, but it’s a gory scene. So if any of that bothers you as a trigger, please be careful. Otherwise, it’s a heck of a story and a reminder to a lot of things. Midae, when he was younger, thought he in love with the stable boy. Just a prince at the time and a teen, he was still finding his way. He sneaks out one night to meet the boy he thinks he loves, only to be lied to and then beaten, robbed and raped by his so called lover and another boy. Let for dead, he makes it far enough to be found and is on the mend. But Midae is forever changed after that day. He has grown cold, distant, closed off and greedy. So greedy in fact, he reneged on a deal and was cursed with his golden dick. It would take someone special to break the curse and Midae is convinced he will never find the person. Even if he finds the one to truly break it, will it change who Midae has become or will he remain the coldhearted man that he is? I feel for Midae. I really do. Even the greed, to a point. Or the reason behind it. He’s so far into his head about what has happened to him everyday, he doesn’t see what he is doing to his kingdom. All he sees is he has to have all the gold and people will be punished for not giving it to him. But that’s no way to live. And even if the witch was pure evil, he did owe her. It wasn’t her fault he didn’t get to extract his full revenge. So, as evil is she may have been, I can see why she cursed him. The whole point to it, was he had a lesson to learn. Revenge isn’t always the best solution, for one, and greed will consume you. Even if there’s a reason behind it. Even if Midae had a reason for the way he acted, and he had one for sure, you still have to remain some sense of humanity. And it’s hard, especially when you feel like you can’t trust anyone. But not everyone should suffer for the mistakes of others who are evil. PTSD is a harsh mistress. She holds on tight and don’t let go. It takes time and sometimes the right person or circumstances in order to help ease it. Though it never goes away. For Midae, he had to find the true person he needed to end the curse, but for himself, he had to learn to change and be better, regardless of what happened to him. It’s not fair to punish many for the sins of a few.

I absolutely love the spin author James Cox puts in this fairy tale series! So unique and imaginative. Always entertaining, funny and with romance! He is without a doubt a favorite author of mine. This and all his books are a must read! I highly recommend!

This was a great story. Only James would think of the affliction put upon Midae and I find it both ironic and pleasing at who helps him. That is all I am saying. If you know James&#039;s work, then you&#039;ll know just what kind of ride he&#039;ll take you on.

Once upon a time, there lived a King named Midas. He was granted a wish. He thought he found his true love - gold. So he foolishly wished that everything he touched turned to gold.... This King Midas story is a tool used to teach us about the dangers of greed. All good moral stuff, right? Now I’m going to review another version (and certainly another type of tool