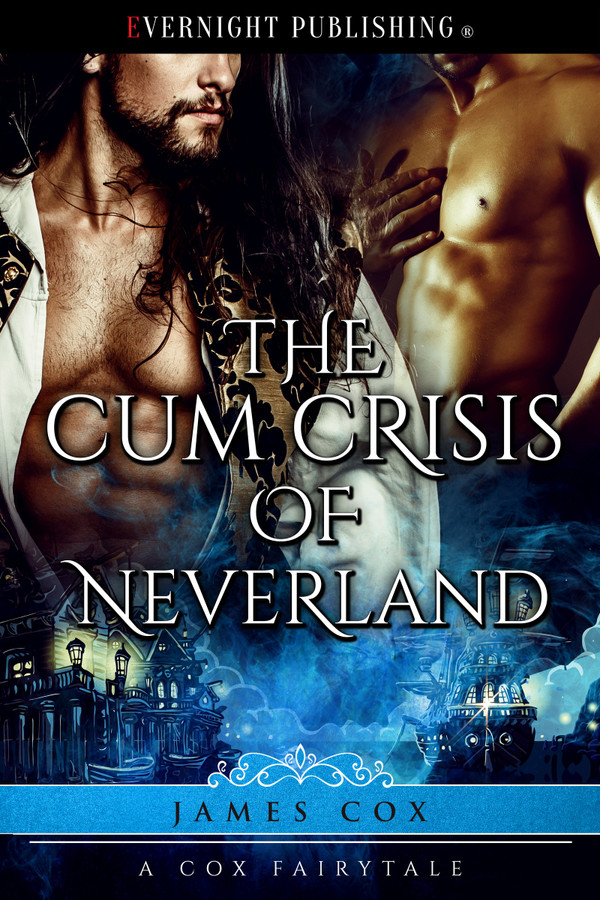 Prepare yourself, you’ve never entered a Neverland quite like this…

“You can go,” Hook said, watching Tink. “Or you can stay.” His silver hook flashed in the moonlight.

Tink should go. It was the best option. It was safer. Too bad his body refused to listen.

“If you’re going to stay, you might as well play.” Hook tugged his dick up and down.

Tink slowly shook his head, his gaze glued to Hook’s motions. The pirate twisted, facing him. One leg bent to reveal his dangling balls. Bloody hell, Tink’s trousers were tented. He felt deliciously stiff. He shouldn’t do this. If Petar found out…

“All you have to do is shove your hand in your trousers, Tink.”

He could. He shouldn’t, but he could.

“No one would see.” Hook blew the nearest lantern out, and it dimmed the brightness around them.

“There you go.” Hook grinned. He reached out with his hooked hand and caught the tip of Tink’s trousers. He tugged it wider. Hook peeked at Tink’s hand around his dick. “Very nice.”

All he could do was nod as the pleasure built.

That was so sexy to watch. Tink was still trying to catch his breath as he glanced out at the men still going at it.

Tink blushed so hard he probably glowed. He glanced at the deck of naked pirates.

If you’ve never read anything of James Cox’s stories, know they are erotica. If that’s not your thing, that’s perfectly fine. It’s not normally one of my faves, but I read one of his stories one time, and I couldn’t tell you which one but I was hooked. Because the stories are a twist of something, but not only that, sometimes they’re almost horrorish or quite funny. And I love the twists and turns that he takes with his stories. They’re great. This one is a major twist on Peter Pan. And the last line of his blurb is correct. This is not a Neverland you’ve ever entered before. In this one, Peter is the bad guy and ‘Hook’ is the one trying to save the ‘lost boys’ Peter is kidnapping for power. Or manipulating them into thinking it will be better off with him. I tell you, it was not a twist I was expecting whatsoever. I never saw coming with what really happened and how it happened. But I was very glad of the ending. It was highly deserved and the very end was an excellent HEA. It’s a really good short story. It’s nothing like the Disney cartoon you see on TV. Shoot, even most of those cartoons aren’t even the real versions of the true stories, so I’m glad that James took the turn he did with this. I think if you guys like erotica and fairy tales with a twist of horror, you’re going to like this. I love James’s stories and can’t wait to see which fairy tale he twists up next time.