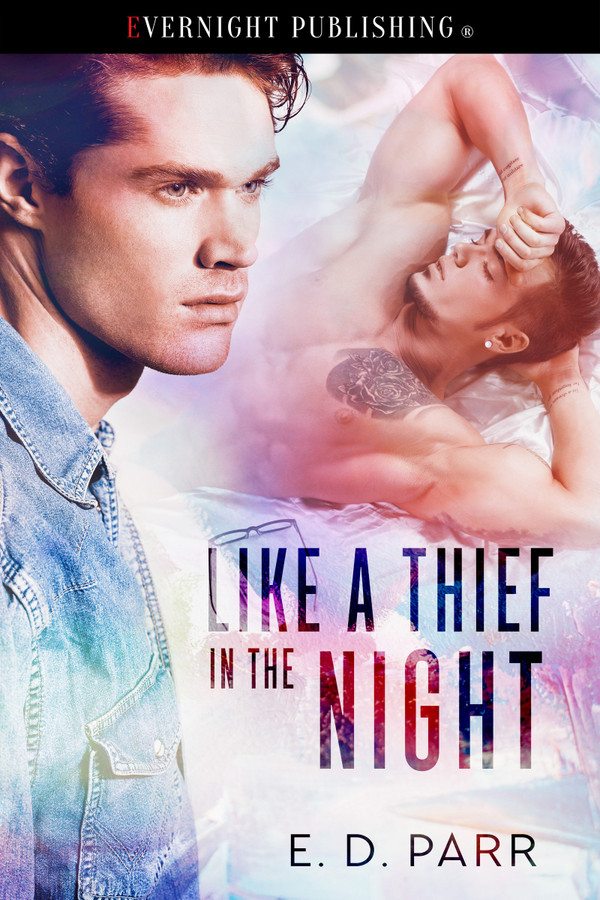 Saxon Dearing buys a pied de terre in the city where he works. Only using the place for three nights, he goes home to his beachside house for the rest of the week. At thirty-two, immersed in his work, he doesn’t know he’s lonely until delicious, twenty-five year old Jon Palmer literally drops into his life during a thunderstorm.

Artist Jon struggles to sell his paintings from a tiny studio, and works in a city gallery to pay his rent. As the two men fall in love, Jon can’t overcome the idea his lack of success is a barrier to telling the gorgeous businessman how he feels.

When his boss offers him a dangerous way of making money, Jon must make a choice. Will he risk telling Saxon he loves him or let his lack of confidence lead him astray and away from the man who loves him?

The invitation to kiss lured Jon in a second. The delicious feel of his lover’s lips mingled with the emotion that swished in his stomach. He clung to Saxon, sharing heated kiss after kiss until his heart raced. He drew away trying to cool the moment.

Saxon traced a finger along Jon’s cheek to his jaw. It left delectable sensation in its wake.

Jon took a deep breath. He returned to sitting in the shelter of Saxon’s arm and stared at the screen where the movie played on.

“I know you go home Saturday after work, but can I see you tomorrow night? Will you come to the beach house? I know it’s clingy, maybe even surprising, but I feel like I don’t want to let you out of my sight.”

The sentiment sent a wave of warmth into Jon’s heart. If only things were different, we’d fall in love. I already feel safe with him. I want to love him and have him love me. He won’t love a felon. Jon sighed.

Saxon must have mistaken the sigh for a refusal. “You probably have plans, of course.”

Jon hurried to correct the idea. “No. I’d love to see you, Saxon.”

“Where’s your phone? I’ll put my address and both my numbers in your contacts.”

Jon couldn’t help smiling. He likes me a lot, for sure. He stood and went to his jacket. He brought his smartphone back to the couch and sat beside Saxon. “Here you go.”

Saxon bent his head to key in the information.

Just watching him gave Jon a soft glow of affection for the man. When Saxon gave him the phone, Jon held onto his hand. “Do you want my number?”

“Naturally. I’ll fetch my phone from my desk.” He slipped his hand from Jon’s grasp, his fingers sliding along Jon’s.

The feeling translated into pure sex for Jon. When Saxon returned to the couch with his phone, Jon traced the shape of his lover’s toned muscles in the t-shirt stretched across his chest with a hungry gaze. Desire gripped Jon and he muffled a sigh. He longed to feel Saxon’s skin beneath his palms. He ached to press against Saxon’s hard body.

Saxon held out his phone.

Jon keyed his number into Saxon’s contacts and slipped the phone next to his own on the adjacent cushion. He turned to Saxon sitting beside him and ran his hand around Saxon’s waist. He leaned to kiss Saxon’s ear and neck.

Saxon shifted his head and found Jon’s mouth. Kissing him and smiling, he murmured, “I might not be able to stop at kisses.”

A smile crept onto Jon’s lips as he recognized his own phrase. He pulled Saxon’s t-shirt up and over his head. “Sounds perfect.” He drifted his fingers in circles over Saxon’s chest as he kissed his lover. An aura of sex fell over him as he opened Saxon’s pants and trailed his fingertips over the shape of Saxon’s cock, rock hard, the tip reaching to the top of his boxers. A low moan escaped him as he touched his tongue to Saxon’s. He pushed his hand into Saxon’s underwear and grasped his lover’s dick.

Saxon barely broke the kiss to murmur. “Let’s get naked. I need to feel your body clasped to mine.”

Jon didn’t need asking again. He stood and pulled off his sweater. He levered off his boots and dragged off his jeans and underwear in one move. His heart pounded. His eyelids felt heavy with lust as he turned to Saxon and saw him naked, his clothes lying on the floor around him.

Jon grabbed him close. He crushed Saxon to him, the feel of his lover’s hard cock pressed on his own sent tingles through every part of his body. He rocked his hips so that their dicks rubbed together. He grasped Saxon’s ass and kissed his mouth hard. His balls tightened and desperation made his stomach clench as he felt the first stirring of orgasm. “Fuck, Saxon, you drive me nuts. I need to come so bad I feel like begging.”

It’s a little strange but sexy story. More of an erotica type. Lots of sex, but a good little story to go along with it. My problem is, I wouldn’t have been so nice as Saxon to let an intruder stay in my home. I would have beat him with the baseball bat. Saxon stays in his place in the city when he works at the office. He had plans to go to his beach house for the weekend, but a thunderstorm rocking the area changed his plans. When he’s good and asleep, something rouses him and he figures out someone is coming in through his skylight. And is making himself at home, like he’s been there before! Saxon is freaking out when the guy takes a shower and with bat at the ready confronts Jon as he comes out. He hears Jon’s story about why he’s there and why he started coming there to begin with, and Saxon takes pity on him and lets him stay. But as they get to know each other, Saxon wants him to stay around more permanently. But Jon feels out of his league, even as much as he loves Saxon. They come from two different worlds and Jon has nothing to offer Saxon. Can they get past this and continue the relationship or is it time to call it quits? Like I said, it’s fantasy. So I get that. But if it were real life, I would have beat first and asked questions later. Mainly when the cops were there. Especially knowing Saxon had been in bad areas before to have the bat to begin with. So yeah. Personally, I wouldn’t have been so nice and trusting but it’s fiction and a sexy story with two sexy strangers that are attracted to each other. They have a lot to get to know about each other and it’s hard when the money difference is so obvious. Jon is hanging on by a thread and Saxon is rolling in the dough. So I get why Jon feels awkward. Kind of like a Pretty Woman moment. You want to know you have something for the relationship, not just be a rent boy or something. Or be taken in out of pity instead of love. So it’s hard. But Saxon can’t help who his family is and that he comes from money or that he’s worked hard to get more. But he doesn’t flaunt it or throw it in Jon’s face, so that’s a good thing. If you want a sexy, fantasy story, this is definitely for you. It’s a short story that gives you a sexy time. It’s a light read that gets you through, especially if you’ve read something heavy. Not a bad story.

Saxon couldn’t resist the lure of the small apartment and even though he knew he could only use it a few nights a week considering his other work-commitments he still made the purchase. Months later, he’s shocked when he spends the night on a different schedule to find a stranger carefully climbing in through his skylight and using the flat as if it were his. Who is this night-time interloper and why is Saxon so beguiled by him? I found this to be a fun and sexy short story. Apart from needing to completely suspend my disbelief in the very beginning (who on earth doesn’t call the cops and/or throw out an intruder who breaks in?) the rest of the story was logical and sexy – a fun romp and smoking hot. The chemistry and attraction was vivid and easy to believe between Jon and Saxon and I was pleased that while they moved to the bedroom fairly quickly, it didn’t come across to me as insta-lust. They both chatted first and carefully felt out their boundaries and such. While I could understand if the pace moved too fast for some readers, personally I found considering the short length of the story coupled with the fact both men were already in a highly unusual situation it didn’t feel too much of a stretch for me to believe they’d act on their mutual attraction for each other. I enjoyed the small side-plot and while it felt a little clichéd to me, it was a good counterpoint to the blossoming relationship between Jon and Saxon. This helped add depth to the story and I thought it really rounded the tale out. It let me feel as if the story wasn’t just a fly-by sexy tale, but had a little more substance to it. The trust and need grew quickly between the two men but I thought overall it was believable. There were a few other characters – far more loosely sketched and not as complicated as Saxon or Jon – but I can’t fault the author for generally keeping the focus of the story firmly on the two main men. A quick, interesting story this was a fun and sexy read.

The author has written a sweet, charming, engaging, lovely, sexy, delightful, and totally awesome tale. I absolutely loved watching how their relationship began when Jon literally dropped into Saxon&#039;s life. If you want a great way to spend your reading time, then I recommend getting this gem immediately.

3.5* Only E.D. Parr is capable of making this preposterous storyline work, but I have to say that I liked the preposterousness of Saxon and Jon. Saxon Dearing is a wealthy, successful businessman. He has a couple of properties - one for weekends and one for his working week in town. Imagine his surprise when due to heavy rains and being forced to remain in town, a very unexpected (but extremely sexy) visitor, literally drops in via his skylight in the roof. Jon Palmer is a very poor, struggling artist. Even working part time at an Art Gallery, he can’t make ends meet. Discovering the weekend-only flat was a real find for Jon. He could ‘drop-in’, use the flat and leave by Monday - he left it scrupulously clean, so no one would ever know he had been there (see what I mean about the preposterousness of it all?). Anyway, Saxon obviously catches him. This being sooooooo E.D. Parr, everything happens so quickly. It was not only Bedgasm Time, but Lovegasm Time too. Can these two make it work when Saxon overhears an art scam that may tempt Jon to do something criminal and have to leave him like a thief in the night....... Another great edition to my growing E.D. Parr lunchtime read collection.