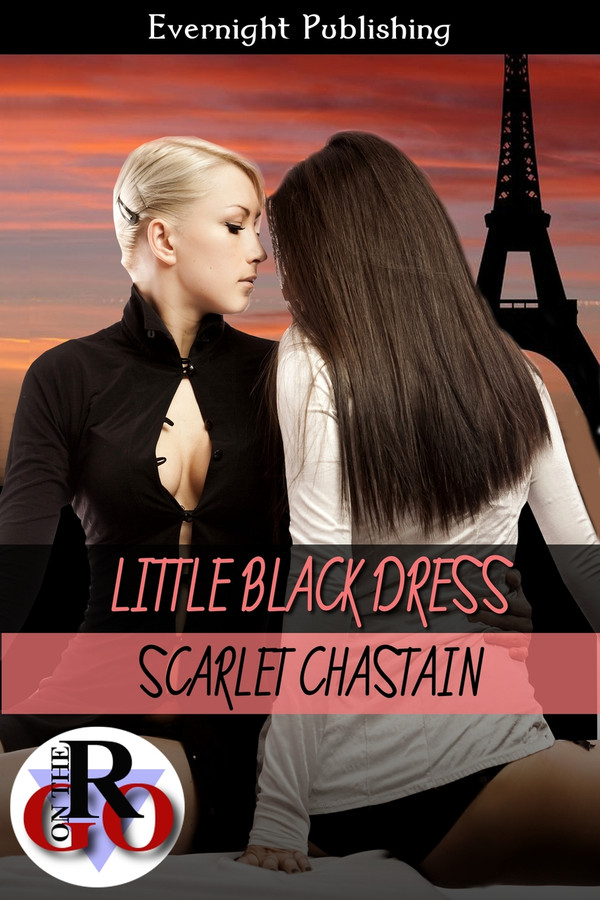 Never underestimate the power of the little black dress...

Paris—the romance and fashion capital of the world. So what the hell makes Jamie Scotts, an IT geek from New York, think the city of lights holds the answers? Driven by need for change, she lies to her boss about her fluency in French and becomes the company’s first international sales person. Fluent? She can barely ask for directions to the ladies’ room.

Jamie’s a duck out of water with her low maintenance style and New York accent. Her unsuccessful sales pitch almost sends her home, until she meets the epitome of elegance—Giselle Bianchi. An unlikely relationship blossoms as the dress designer takes Jamie under her wing. Giselle’s guidance not only reveals Jamie’s missing je ne sais quoi, but also unlocks repressed passion with the help of a little black dress.

“You must not have much time for a social life. Boyfriends?” Jamie had glanced at her hand back at the studio for the telltale signs of a ring.

Giselle picked up her glass and rocked it in a circular motion. The red liquid coated the sides of the glass and flowed downward into a pool of garnet.

“I’m sorry. That was too personal, wasn’t it?” She looked down at her own glass.

“No. Not too personal. I’m just trying to find a way to tell you something that may risk our new friendship.”

“No boyfriends. I’m attracted to women.”

Her words washed over Jamie like a soft wave and flowed warm and hot down to her core.

“No boyfriends,” was all she could say before taking a very unladylike gulp of her wine. Glancing back to Giselle, Jamie’s heartbeat ticked up and she took a deep breath before she spoke. “I’ve always been something of a geek.”

Jamie snorted at the sound the word made coming from Giselle lips. “Geek means socially awkward.”

“I was painfully shy when I was younger and spent most of my high school years behind a computer screen. I found my niche in college as a computer science major. But as one of the only females in my classes, I found myself being one of the guys instead of dating them. They just didn’t interest me.” Jamie shrugged, finished her wine and slid the glass toward Giselle who promptly refilled it. The delicious wine’s effects washed over Jamie, giving her the courage to ask the question that was at the tip of her tongue. “When did you know you liked women?” Her eyes flicked to the side then back to her glass.

“I think I’d always known but one particular night I found out for sure. I went on a date with a man. He took me to a club and his sweaty hands were all over me while we danced. He kept shoving his tongue down my throat. I felt physically ill and slipped out the back door after excusing myself to the ladies’ room. The door led to a dark alley and that’s where I saw them. Two women. I heard them first as it was so dark. Their soft feminine sighs drew me to them. I moved closer to find one of the women had the other against the wall, fondling her exposed breast and kissing her as though she were a cherished piece of porcelain. I couldn’t look away. Then they saw me and stopped. I was about to turn and run away but the woman against the wall held her hand out to me. Her eyes held such depth and generosity. I looked at the other woman and she smiled. I joined them and we did nothing but kiss. I never saw either again but I knew that was the lifestyle for me. Soon after I moved to Paris to start a new life. And here I am.” Giselle shrugged and smiled.

Jamie turned toward her new friend. “You have it all together. I wish I knew what I wanted out of life.”

Giselle touched her arm. “You will, ma chère, you will.”

After dinner, they walked arm and arm back to the shop. Jamie’s cheeks hurt from smiling, her belly sated from the rich French food. They stopped at the shop’s front door and Giselle pulled her keys from her purse. She twisted the key in the lock and pushed the heavy door open into the room. Only a small sliver of light shone through the window from the light post outside.

“I’ll call a taxi for you and have my courier deliver the clothes to your hotel tomorrow. You should take that great blouse and pleated skirt with you for tomorrow’s appointment. You look lovely in pink,” Giselle called as she headed down the hall without switching on the light. Jamie tried to follow Giselle’s rapid French as she listened to her call for a taxi. The piece of the conversation she made out was the address as Giselle returned to the front swinging two hangers from her index finger. Smiling, she held the blouse against Jamie’s body. Silky fabric slid across the backs of Jamie’s hands.

“I can’t thank you enough. For everything.” Jamie looked into the woman’s eyes, remembering the story Giselle told her at the restaurant. Depth and generosity were exactly what reflected back at her.

“The pleasure is all mine.” She handed Jamie the hangers, grasped her shoulders and pulled her in. Jamie breathed deep and inhaled Giselle’s signature scent of orange and jasmine. Their bodies melded into one another as Giselle kissed Jamie on both cheeks. Her eyes locked with Giselle’s as they pulled away. Jamie wet her lips, lifted her head and closed the space between them. A horn sounded outside the door, startling the women.

Jamie Scotts is a woman on a mission. She is on her first foreign sales campaign in Paris and is hitting a brick wall. No one will talk to her. When she meets a woman by chance at a café, her trip makes a turn for the better. Giselle takes her in hand and shows her how to do business, dress and slowly but surely she loses her heart. This short Romance on the Go title was a nice read for an afternoon. These days, with my busy schedule, I like snack size romance. This edible morsel was a delightful travel adventure about one woman helping another and a realization that their relationship went far more into personal waters than simple friendship. Giselle is a sophisticated fashion designer that started at the bottom. She sees Jamie floundering and helps her. Her feelings deepen and when she sees Jamie in the arms of a man, she drops her like a hot potato. Therein lies the conflict of the story. Is Jamie ready to commit to another woman? Will Giselle answer her phone after leaving with no explanation? A taste of Paris, an almost romance and a final episode of self-discovery make this a fun and lively read. The sensuality and low undercurrents of the book are appealing and the characters believable. Going to a new country as a salesperson would be a scary endeavor. Finding someone who shows you the ropes will bond anyone, but in this case, the two ladies involved find an enduring passion that was refreshing. The sex scene in the back of the book was tastefully done and left many possibilities yet untapped. I enjoyed the book and will look for more works by this author. If you want a short lesbian erotic read, check out this Romance on the Go.

The characters were lovely. They each had a great back story and wonderful personalities. This is a little contemporary story heavy on characters. There was one sex scene and it was so hot! This is a great short if you’re in the mood for something quick and steamy.

I Kissed a Girl in Vegas by Scarlet Chastain