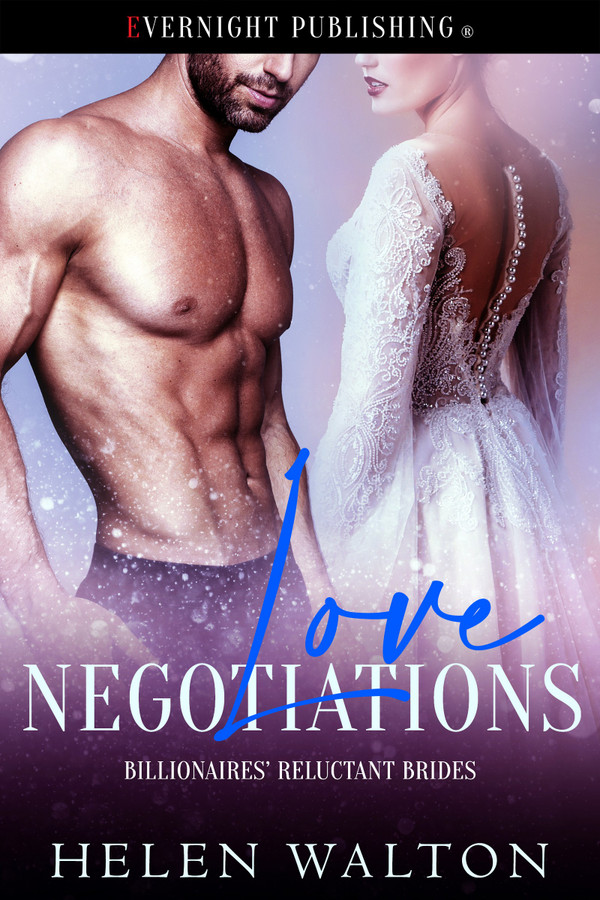 Negotiation or blackmail? Is there a difference?

Kennedy Fuller has a secret. She enjoys watching people in intimate acts—especially the exhibitionist couple for whom she nannies. What’s a woman with three years of celibacy meant to do?

Billionaire lawyer Marco Lawrence has known Kennedy for years. He never suspected she hid a sensual woman beneath her youthful ponytail until the night he found her eavesdropping on his friends in the throes of passion. Now he can’t get her out of his mind, but he can’t date her. Although he needs a wife before they’ll make him a partner in the law firm, he now has the means to negotiate with Kennedy. Marry him or he’ll tell his friends her little secret.

Kennedy can’t lose the people she thinks of as family. Negotiate she will, even if marrying him could risk both their hearts.

This was it. There was more often than not a bit of quiet before the big show. I squished my ear harder against the door until it almost hurt. The door swung open; I stumbled into a suited chest. Oh, crap. Warm hands grabbed my shoulders, keeping me upright. I left my face buried in his chest, too mortified to acknowledge William caught me eavesdropping. I couldn’t glance up. Embarrassing heat filled my face. My boss would realize that I listened to them have sex. The door snicked shut.

If the kids woke on the monitor in my hand right now, it would be the one thing to save me from losing my job.

A firm hand tipped my chin up. My gaze met the sparkling gray steel eyes of Marco Lawrence, best friend of William, surrogate uncle to the twins, and the hottest forty-year-old man I’d ever known. Forty-three, to be exact. I opened my mouth to deny what it looked like, but he placed his finger over my lips.

The scent of his masculine skin rushed up to my nose. The sudden urge to suck his finger into the warm heat of my mouth made my taste buds water. Loud cracks of flesh on flesh reverberated through the door. I slammed my eyes shut. Oh, God, William was spanking Prue. She loved when William spanked her ass, and I enjoyed hearing how much she loved it. My nipples hardened under the flimsy material of my summer dress.

“Open your eyes, Kennedy,” Marco whispered against the side of my face.

His warm breath brushed the shell of my ear, sending a ripple of goose bumps in unexpected awareness of him as a man. A hot, virile man. I squeezed my thighs together and shook my head. The sounds behind us grew even louder as Prue started begging. I wet my lips, licking Marco’s finger with the movement.

He trailed his damp finger down from my lips to my throat and pressed against the rapid pound of my pulse fluttering in my neck so hard even I could feel it.

“Open,” he demanded in a heated whisper.

His tone whipped through my insides and sent a rush of arousal through my body, but I snapped open my eyes at his demand.

A shiver of desire wracked my body. The sounds behind the door grew louder, more urgent. I shifted a fraction, and my stomach met the hardness of Marco’s erection. A quiet whimper escaped my throat. My gaze stayed on the front of his pants, brushing against me with the tiniest of touches. The desire for what was inside filled me with urgency more than the air I breathed right now. I could take him in my hand or drop to my knees and take him in my mouth. All of it. I wanted to be screwed by him. Hard and furious up against this very door.

I sucked in a ragged breath, drawing his expensive aftershave deeper into my senses. I’d smelled him often enough over the years I’d worked for the Burberrys, but never this close, never this personal. We were mere acquaintances. I was the nanny. He was my boss’s best friend. We had nothing in common. Never would. Except for this moment here, listening to Prue and William have sex.

I was burning up, my insides clenched with the need to experience the ecstasy, the pleasure, the release building in the air between us.

As if to stress my words, Prue screamed her orgasm through the solid door. Marco stepped back, dropping his hand from my neck. His gaze swept up and down me once, twice, as though he’d never seen me before in his life. A new awareness glittered in his eyes. An understanding I was a dirty woman who enjoyed hearing other people have sex.

He smiled, a deep carnal smile promising many wicked delights, spun on his heel, strode to the front door, and let himself out. If I possessed the time, I’d sink to the floor, but I didn’t. Prue and William had finished having sex and one or both would soon come through the door. I ran up the stairs and into my bedroom, my breath coming in short sharp rasps, not from the exertion but from what had happened between me and Marco.

Moments later, the unmistakable click of Prue’s heels rose along the stairs and disappeared onto the thick plush carpeting in their bedroom. Every nerve ending sparked like I’d stuck my finger in an electric field. Perhaps I did. Marco’s electric field. I stretched up on my tippy-toes to my secret hiding spot high on the bookshelf, my hand searching for the box of toys hidden amongst the books and bouquets of dried flowers. Taking the box down, I punched in the code and unlocked the lid. Out fell the dildo. I didn’t even wait to get into bed. I yanked my panties aside, shoved the toy into my wetness hard and fast, imagining it was Marco’s cock until I came against the bookshelf. My legs shaking and my eyes open as he’d told me to. Shame scorched a trail across my cheeks.

How would I ever look Marco in the eyes again now that he knew my secret?

Great story! Kennedy and Marco start their relationship in a non-traditional way, but watching their relationship unfold and eventually turn to love was fun. I loved the stubborn side to Kennedy and was something I could really relate to. There were definitely some funny parts that I really enjoyed as well. I really liked this book and will read more by this author!

No Negotiations by Serenity Snow

Their Love Deal by Helen Walton