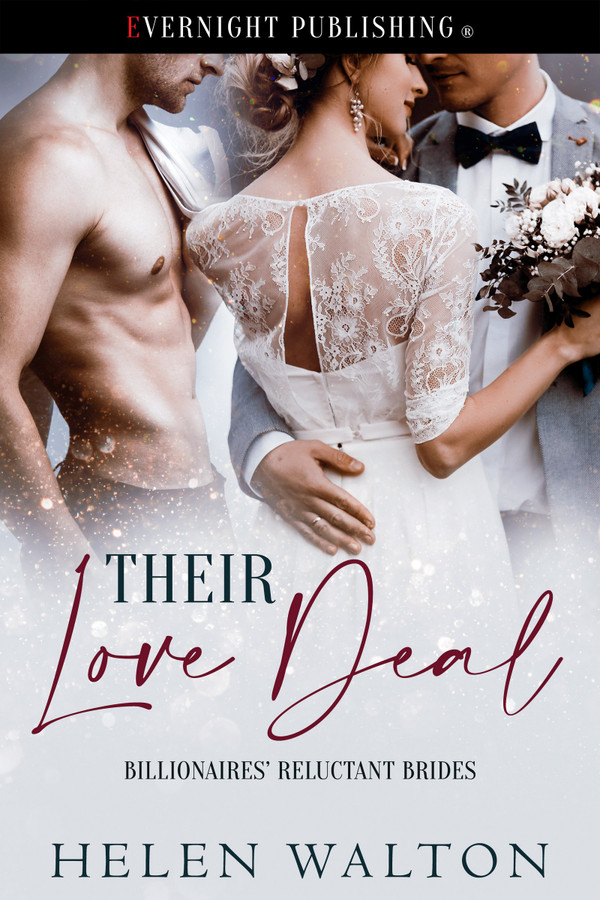 Recent college graduate Tiffany Herringer never expected to fall in love with her two boyfriends. After three years of loving Dieter Brant and Dex Munroe, she can’t let go of either of them. Everyone seems content with their arrangement, until the graduation party when Tiff discovers they know each other—and they’re friends—friends who talk about her and the things she likes.

When they suggest merging their relationships, Tiff doesn’t think she can be with two men at once. Sure, she dates them both, but together? If she agrees, she’ll never have to choose between Dieter and Dex, but then she’ll never get married. Not that she wants to get married … or does she?

The bathroom door opened and Dex stepped into the bathroom naked. In all his hard morning glory. I dropped the bar of soap. He slid open the shower door.

“What are you doing?” I squealed.

“Showering. Move over.” He placed his hands on my hips and wriggled me out of the way so he could fit into the cubicle with me.

The water gushed down his naked body over his hard muscles and to the even harder one sticking out from his groin.

“You put so many buts into everything.” He glanced around the shower. “Where’s the soap?” He spotted the bar on the floor. “I see what’s going on.” He pointed at the soap. “We’re playing ‘who dropped the soap’ game.”

I shook my head, but it was too late. Dex squatted on the floor and picked up the soap. He slid the bar up the inside of my thighs running his other hand over the soap trail. My body combusted into a longing need to experience his hard length deep inside me. I gazed down at his dark hair slick with water and his face level with the place I wanted him to bury it.

He slid the soap higher over my throbbing mound.

“I love this bit of fluff you keep just for me.”

His other hand followed the soap and brushed through my curls.

“You did.” He stood stroking his hands up my stomach, around my ribs, and under my breasts.

I dropped my head to his hard chest. “Dex.”

“You know I don’t play fair.” He molded my body against his.

His hardness pressed into my stomach too far from where I wanted it.

“Why do you want us all together?”

“What about you?” I slid my hands to his back and ran them over his firm buttocks. “Will you love it?”

“I love anything about you.” He massaged my buttocks in return.

Damn him, if he kept this up, I wouldn’t be able to function for the rest of the day. I released my hold on him and ducked under the warm spray rinsing all the suds off my body. I stepped from the shower with a last longing look at his erection.

Dex chuckled and ran his hand along his length. “When you say yes, I’m going to come all over you.”

“What makes you think I’ll say yes?” I rubbed myself dry with a towel.

“You’ve already said yes. You just have to admit it.”

He was right. I wanted them both and I couldn’t admit it.

I left him to finish washing, wondering if he’d relieve himself in the shower and wishing I’d stayed to watch. The man was too sexy. I dressed in a hurry before I returned to the bathroom.

Dieter was crunching a bowl of cereal in the kitchen.

My cheeks heated thinking about Dex in the shower and what it would be like if all three of us were in there together. It wouldn’t be a tight fit in Dieter’s bathroom. His shower was big enough for a good sex romp, which we’d enjoyed many times.

“Morning,” I mumbled and made myself a bowl of cereal.

“What’s up?” He cocked his hip against the counter.

My gaze dropped to his pants.

“Nothing.” I crunched the cereal.

“Did you have the shower too hot? Your face is flushed.”

“Maybe.” I waved the hem of my lemon-yellow shirt to fan my overheated body.

“That’d be my fault,” Dex said walking into the kitchen. “Tiff and I shared a shower. She’s such a hog with the soap.”

My face and body heated even more.

Dieter chuckled. “Remember the first shower we took together?”

“Yes.” I placed my finished cereal bowl in the sink and fetched a cup of coffee.

Dex waggled his fingers my way, so I poured him a cup too.

“We ended up on the floor in the sixty-nine position and almost drowned each other.” Dieter laughed. “The orgasms were worth it though.”

It had been worth the lack of oxygen. I sculled the rest of my coffee and rinsed my cup and bowl then placed them in the dishwasher trying to ignore the way my body hummed in arousal at the memory and Dex’s hands in the shower.

“How about a kiss good-bye?” Dieter stepped closer.

I rose on my tiptoes and kissed his cheek.

“You call that a kiss?” Dex asked.

“No.” Dieter placed both hands on the side of my face and claimed my lips.

His tongue swirled with mine. His lips molded against mine. He stroked his thumbs along my jaw and coaxed me to open my mouth wider, so the kiss grew hotter until it centered all my thoughts on his taste inside my mouth.

I sunk my fingers into the lapels of his jacket and hung on while he plundered my mouth in a kiss that would stay with me for the rest of the day. And night. The rest of the week too.

He released my mouth from his and pecked the tip of my nose. “Have a great day at work.”

Dex slapped him on the back, and they walked to the front door.

“Are you coming?” Dieter called out when I hadn’t moved.

“Yeah.” I flapped my shirt again. I almost came from the kiss alone.

There is nothing like having one amazing significant other, but having two? Unheard of. Especially when it&#039;s their idea to share the relationship. I love Tiffany&#039;s character because she is relatable with skepticism and anxiety. She is hesitant about the situation when her two men, Dex and Deiter figure out that she&#039;s seeing both of them. When it becomes their idea to give the trio a shot, she doesn&#039;t believe it&#039;s actually happening, that it&#039;s reality, because why would things actually work out the way you want it in the end? And they do! This is such a feel good romance with just the right amount of spice and a quick read, definitely worth your time.

The Real Deal by Alannah Harte

Road to Love by Jules Dixon