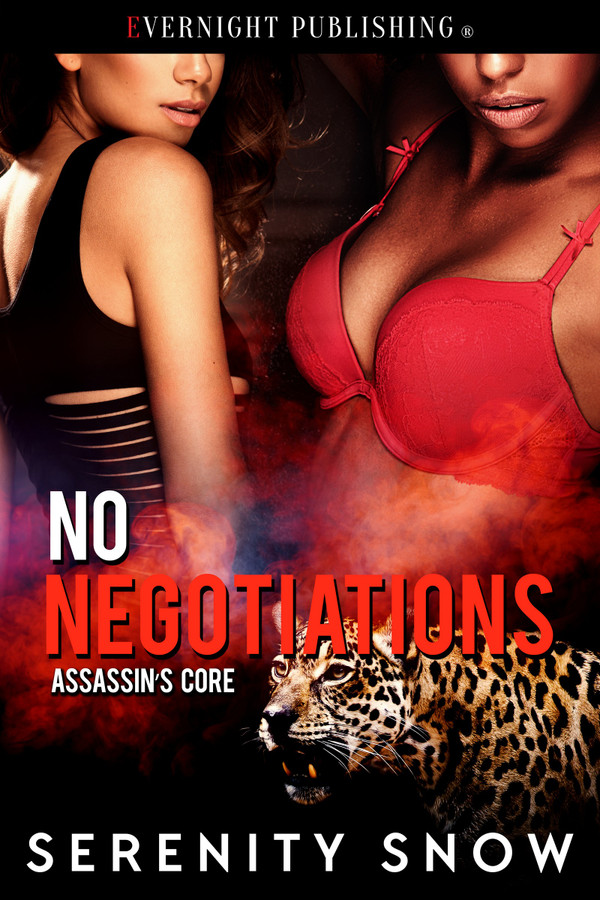 On the verge of getting back to her normal, a new problem walks into Alexi’s life. One of her employees is attacked outside her club and ordered to give her a message. Not sure exactly what that means, Alexi finds herself embroiled in a battle of wills with a human trafficker who threatens her mate’s life.

With that, the jaguar sees red and pulls out all the stops. As she’s doing all she can to keep her mate safe, Tatiana undergoes a change of her own, one that awakens the darkness inside her.

As Tatiana slowly becomes a witch willing to kill for her mate, the enemy pushes harder and Alexi learns they’ve both been pawns in another man’s game. But all bets are off and there will be no negotiations. There can only be one…

Tatiana climbed off the elevator and headed for the apartment. The club seemed busier than usual, and she wondered if Alexi was down in her office.

Slate opened the door for her with a brief smile. “Tatiana.”

Tatiana moved in and the door closed at her back. “Hi, honey,” she said, moving to the couch where Alexi lounged.

“Hey.” Alexi tumbled Tatiana onto her lap and kissed her.

“I guess you missed me,” Alexi teased.

“No, I’m just hoping you’ve made something to eat because I’m starving.” She grinned and nipped Alexi’s bottom lip before kissing her again.

“Dinner’s on its way up,” Alexi told her, pushing her hand beneath Tatiana’s blouse.

“Oh, good,” she murmured as Alexi unbuttoned her. “I’m going to take a shower.” She dropped a kiss on Alexi’s forehead and got to her feet. “That meeting was so annoying. I don’t know how my mother does it.”

“It was her job,” Alexi replied.

“But I already have a job, and they expect me to stand in for my grandmother until they find someone. I don’t know if I can do this.”

“Do what you can,” Alexi told her. “Don’t stress over the rest.”

Tatiana sighed. “I know.” She stripped. “If one night is tiring, I can imagine how exhausting keeping up with it after work is going to be from now on.”

“You’ll do fine,” Alexi assured her as she wrapped her arms around her from behind. “You’ve got this.”

“On top of that I have to hire someone to replace Morgan. I still can’t figure where the hell he vanished to. He’s not answering his phone.”

“Don’t worry about him,” Alexi advised, and Tatiana turned to face her.

“I’m just curious.” She leaned towards Alexi. “Why do you want me to hire someone who’s going to be a danger to me?”

“She’s going to be instrumental in getting to someone.”

“His name is Ramon Ortiz,” Alexi told her. “He’s a trafficker of kids and women.”

“He’s not going to get you, sweetie, I promise. If he does, he won’t live long enough to regret it.”

“I can protect myself,” she said. “I just don’t want to have to kill that woman.”

“Do what you have to,” Alexi told her. “However, taking her out will be Galli or Sax’s job.”

Tatiana rested her hand on Alexi’s shoulder. “So, why are you in this mess with him?”

“I have something he wants and he’s not getting that, either.”

“Information and a woman,” Alexi told her. “He had her roommate killed and the roommate was a federal agent who handed information over to her. Gracelyn is her name. She works for me here.”

“She’s a housekeeper. I’m not allowing him to kill her.”

“So, he threatened my life?” Tatiana withdrew her hand.

“He thought that would make the decision easier for me, but I’ve tightened security around you.”

“What kind of information?” Tatiana demanded.

“Something that could get him the needle.”

“Do guys like that even go to jail?” Tatiana asked.

“They do, and some of them manage to escape or get killed trying to stay free.”

“Tia.” Alexi caressed her back. “No one means more to me than you. I hope you know that.”

“Did you sleep with her?”

“No,” Alexi said, a growl in her voice. “It was never like that, and it never will be. I’m protecting her, but I’d die for you.”

She nodded. “I know.” Alexi had shed blood for her, kept her safe from a family that would have killed her. She trusted her place in Alexi’s life was one of importance.