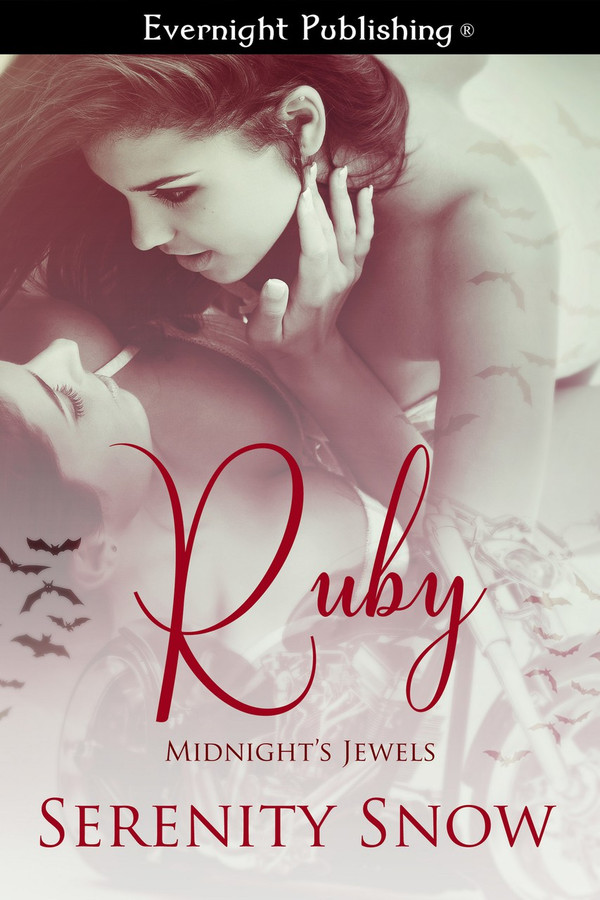 Ruby is a gem psychic with a tarnished past and no reason to trust. She’s on the run from those who’d love to use her power to gain immortality, but fate throws her into the arms of a vampire bat shifter. Jase is unlike anyone Ruby has ever known. She pleasures her body and steals her heart.

There has to be more to a woman who wants her just for herself. Ruby fears this is just a ruse. However, Jase is willing to sacrifice all she has, including her life, to save Ruby. So, Ruby finds herself face-to-face with a decision she’s never had to make—love or death.

Ruby reached the door of her apartment breathing hard and nursing a wound that hurt like hell. She wasn’t sure if it was poison or not, but the spell had hit her shoulder and gone clear to the bone.
Finding her wards still intact, she used the unlock spell that opened them. She rushed inside knowing she had to hurry. Her window of escape was small especially with the bats having arrived. That they were here only verified her fears.
She wasn’t going back. She pushed the door closed and began reworking her locks. The door slammed open banging against the wall and startling her out of the locking spell. She scrambled to gather her focus as Jase hurried over the threshold.
“No!” Ruby screamed frantically and threw one of the spells she knew. “Stunner!” she cried.
Jase leaned left and the spell sailed long. She readied lightning but her power locked in her grip refusing to ease from her.
Jase’s fingers closed around her throat and Ruby gasped. Anger pumped through her as she frantically reached for her power again.
Jase put Ruby’s back against the wall and orange eyes glowed as if backlit. Anger and determination shone in the depths that held her enthralled. She felt her shields being poked at and clenched on them.
Hard lips slanted over hers, but she refused to give ground. She turned her head away and soft lips kissed her jaw.
“Baby, I’m not leaving here without you,” Jase told her softly and pressed into her.
Something hard pressed against her lower belly, but Ruby paid it no attention as she struggled. “Stop it,” Ruby ordered tightly. “I’m not going with you, and I’m not going to allow you into my mi—”
Jase’s tongue slipped into her mouth then and chocolate filled her senses. It was a feast, a delight. Rich and sweet. Ruby moaned desperate for more. Her pussy moistened, her nipples hardened in the cups of her bra.
Ruby clenched her fists fighting the urge to touch Jase, and revel in the softness of her. Part of her only wanted to surrender, but that was what she fought against.
“Mine.” The words whispered into her mind, a hard telepathic statement of possession that scared and excited her.
Jase deepened the kiss, her tongue a weapon of mass destruction Ruby had no defense against. The chocolate seduction stole her will to fight.
Jase broke the kiss, trailing her lips over the side of Ruby’s neck to her throat. Ruby tipped her head back allowing Jase better access to her throat.
Pleasure tore through her, and her hands went of their own accord to Jase’s waist. Her fingers clenched in her shirt and hunger bloomed in Ruby’s belly.
Why couldn’t she fight this insidious sensuality?
Why was it so damn good?
Jase licked up the slender column of Ruby’s throat, her tongue warm. Ruby’s clit pulsed and her juices eased from her dampening her panties. Her breaths came hard and fast, her heart pounding.
“Jase.” That pitiful whimper in her voice barely registered to her ears and she hated herself, but her body wouldn’t stop, her power wouldn’t let go. It was plastered against the front of her, spilling into Jase. Goddess, how did she make that stop?
Right now, she didn’t want to.
No, she did, she just … she couldn’t focus.
Jase kissed her lips softly and Ruby opened her eyes. Jase’s stare was intense, intoxicating.
“You belong to me,” Jase said softly. “I have every right to be in your mind.”
Ruby attempted to process, to focus. Fear slapped her hard, and she tried to maintain her mental shields against invasion despite the inability to concentrate. Her shields didn’t so much as break as they shuddered before a small hole opened giving Jase immediate access to her mind.

Although this is my favorite in the series I have to say I love them all. Another great job keep them coming