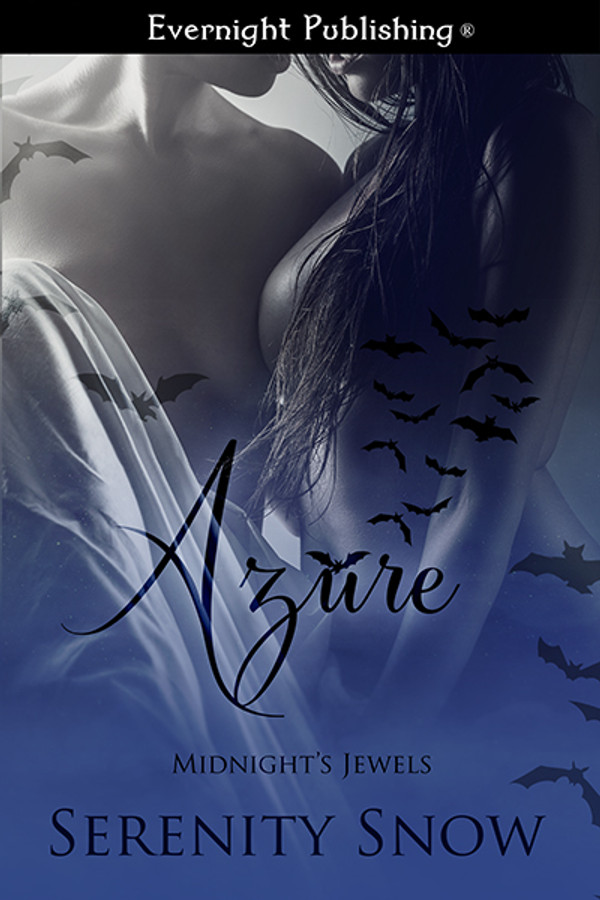 Azure Agate wasn’t looking for love or any complication in her life. Then, her best-friend was murdered right before her eyes bringing a sexy protector into her life. Azure isn’t sure she can trust this woman, but her libido is sure eager to get on a personal basis with Kerra Knight.

Kerra has a simple job to do, gather information on a trafficking organization. Imagine her surprise when she finds her mate right in the middle of it. However, the helpless damsel in distress is anything but helpless. Azure is a power house of magick and desire waiting to be tapped and Kerra is more than willing to be the woman Azure leans on.

As Azure delves deeper into what got her friend killed, she finds herself falling for the strong silent Kerra and realizes her vampire bat savoir will stop at nothing to keep her safe.

Kerra turned her attention to the player. “Music?”

Azure smiled. “Music will be fine.”

Kerra put on a CD and Azure began to move to the beat. “I like this song.”

Kerra smiled and pushed the coffee table to one side before dropping onto the sofa. “Come give me a lap dance,” she commanded.

Azure studied her a moment as she considered the simple dress she’d pulled on for the evening in.

“Okay.” Azure crossed the room and caught the rhythm of the song. She closed her eyes and let her body flow from one move to the next with fluidity. With each shake of her hips she moved closer to Kerra. She let the moves take on a Latin flavor as she recalled the Latina who’d taught her to salsa and tango.

Azure turned without breaking the rhythm and backed up, body swaying. Feeling the warmth of Kerra close, she lowered her hips and bounced her butt, before dipping it down to rub across the other woman’s firm thighs.

“That’s it, sweetheart,” Kerra said as she stroked Azure’s thighs while Azure rubbed her back against Kerra’s small breasts.

Azure pushed to a standing position and found the zipper of her dress and slowly dragged it down. She swayed to the beat enticingly, glanced over her shoulder and then pushed the wide shoulder straps just over the balls of her shoulders before turning.

She pushed the dress down slowly without breaking eye contact, exposing the plum bra with its navy floral pattern. Her breath hung up in her lungs at the pure lust that shone bright in Kerra’s obsidian eyes.

“Take it all off,” Kerra urged in a tone thick with arousal.

Azure pushed the dress the rest of the way down over her waist and muscled thighs, revealing the matching panties.

Azure stepped out of the dress and turned and bent to pick it up so Kerra could fully appreciate the panties. They were like thongs only better. They didn’t anchor in the crease of her butt. Instead, the comfortable straps not thicker than a normal panty leg rested on the curves of her cheeks. They’d been a gift she’d picked up for herself last week. They made her feel sexy.

She straightened with her dress in hand. Kerra’s breathing was rough enough to make Azure smile as she turned away to drape her dress on the chair.

Azure gracefully danced her way back to the couch. She straddled Kerra and moved erotically causing her to rub against the hard bulge in Kerra’s pants. The strap-on felt damn good against her clit, sending shivers of delight raining through her.

Kerra’s hand went to Azure’s hip and stroked over her ass, palming the curve before giving it a light swat. Azure’s skin heated even more from the simple touch. She rose up on her knees and lowered herself as her hands glided over Kerra’s shoulders. She thrust forward and her clit brushed that hard ridge in Kerra’s pants again drawing a gasp from her.

Kerra groaned softly and Azure kissed Kerra’s jaw trailing kisses to her earlobe and then looked down at her before withdrawing her hands.

Azure stroked her hand over the side of her neck to the valley between her breasts and down over her bare stomach. She pushed back so her feet could touch the carpeted floor and stood. Azure worked her body in a salsa like move and dipped her knee to brush against Kerra’s before maneuvering her body in a roll that brought her breasts, nipples tight and erect, right in Kerra’s face.

Azure stroked her hand over Kerra’s throat trailing it down over the mound beneath her T-shirt. Her fingers teased over the nipple, and then she backed up. Azure unhooked her bra and tossed it to the couch next to Kerra who crooked her finger at her. She went and Kerra gave first one nipple a pinch and then the other before slapping one fleshy mound.

“What pretty tits.” She leaned forward and licked one nipple and then pinched the other hard.

Azure gasped as pain ripped through her and made her pussy mist.

“I can smell your pussy,” Kerra crooned. “It’s such a decadent scent my mouth is watering. I think I’ll eat you. Up.”

She did and Kerra got to her feet and pulled Azure to her in a move so fast she started as she tumbled against Kerra’s body. Kerra gave her a slow smile and then claimed Azure’s slightly parted lips.

Her tongue pushed demandingly into her hot mouth, plundering the hot, dark cavern. Azure sank against her, moaning softly as her arm wound around Kerra’s neck. She strained against her, her body a fever. She was burning, and aching for skin to skin contact.

Kerra’s fingers slid through the mass of wild waves of Azure’s hair as she nipped her chin and drew her tongue over Azure’s throat to the hollow at its base. Sharp teeth lightly scraped over soft flesh and Azure’s womb clenched, her juices were hot as they eased from her.

Her head was spinning, her body catching fire.

Out of all the books this one was a little tougher read but not by much I still enjoyed it but you have to read and understand it. Kerra and Azure are meant to be together no if ands buts about it. SNOW showed her skills again thank you