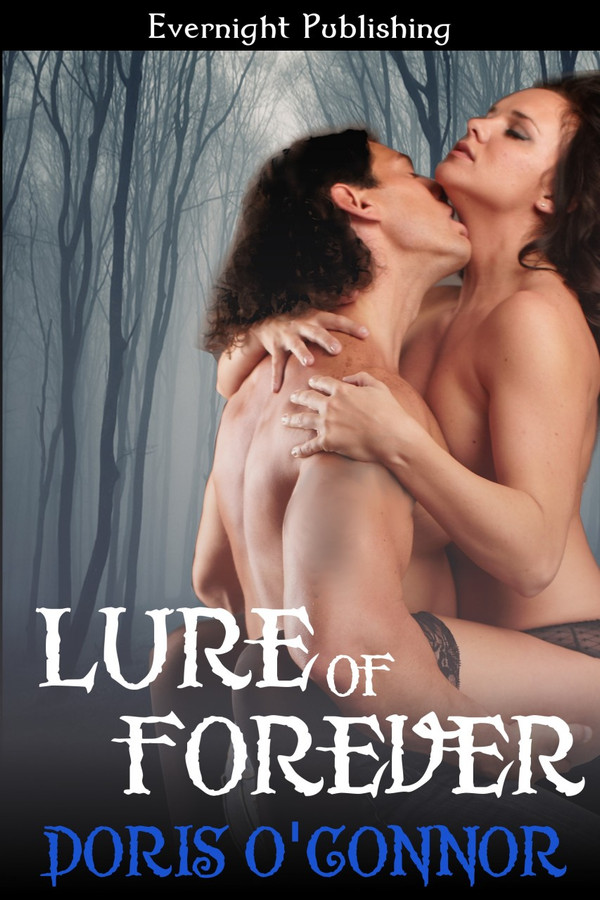 You'd think a three thousand year old vampire would believe in forever. Not Lucas. He has an escaped demon to hunt and no time for the follies of humankind. When strip-o-gram Coralie arrives on his boat, she awakens human instincts long buried, and protecting her becomes of paramount importance.

Coralie, standing in for a friend, is mortally embarrassed at having stumbled onto the wrong boat. The vampire wannabe she encounters makes her body sing in ways she never thought possible. Finding out that he is indeed the real thing throws everything she ever believed in into doubt.

With the demon closing in and the future of humanity in peril will they manage to find their forever?

Coralie kept her finger on the buzzer this time, all too aware of Lucas's amused presence behind her. He'd said they were finished, for pity's sake, so what was taking Jerry so long? It took seconds to shimmy into underwear and a top––unless, of course, shifters gave you the same kind of mind-blowing, limb-weakening orgasms that vampires seemed to. She shifted away from Lucas's cool presence at her back and cursed her traitorous hormones, which had heat climbing into her cheeks and moisture seeping into her knickers. Lucas chuckled behind her and she turned around to glare at him, but her smart retort died on her tongue.

The genuine smile on his face took her breath away. He was devastating enough when he was broody, but that open smile and the twinkle of amusement in his green eyes made her wish he would smile more. Her heart gave a suspicious little lurch and she dug her hands into the pockets of her jeans to stop herself from tracing the laughter lines around his eyes. Now was not the time to get emotional over him.  He's a vampire, remember.

But her silly little heart wasn't listening. She just stood grinning at him like some girl on her first teenage crush, and his smile deepened.

"Keep looking at me like that, Chere, and we won't make it in to see your friend."

"Promises, promises," she grumbled under her breath, and Lucas chuckled again whilst pulling her back into him. He nuzzled into her neck and Coralie sunk into his embrace.

"That's better, Chere. Relax. After all, we want Jerry to believe that you fell head over heels in love with me and that's the reason you haven't been around."

"Oh, she'll never believe that. I don't do men and I certainly don't fall that easily."  The words tumbled out far too breathlessly and Lucas's hold on her tightened. He nipped her earlobe playfully and Coralie didn't quite manage to suppress a shiver in response.

"So you say, mon coeur, but your body tells me otherwise." His tongue traced the shell of her ear and his hand wandered underneath her t-shirt, skimming the underside of her breast. Her nipples tightened in response and she could feel his smile in the butterfly kisses delivered along her neck and collarbone. Her head fell back and Lucas caught her moan in his mouth. He moved her sideways to deepen the kiss, whilst his other hand delved underneath the waistband of her jeans. She instinctively spread her legs to give him better access and he broke the kiss, his now dark green eyes twinkling in approval.

The growled words settled low in her core. His fingers delved underneath the elastic and she moaned her words of denial, "Lucas, we…we can't," even as her body went up in flames, feeling his fingers sinking deep into her wet core. His harsh breath skimmed across her neck and her hands grabbed his hair and pulled him closer, as his thumb settled on her clit and she moaned her need into his shoulder.

Lucas moved her into the shadow of the stairwell, where the harsh fluorescent lighting didn't reach, with a strained, "I've no intention of stopping."

He increased his pressure on her clit and inched her against the wall, until he surrounded her. Arousal overtook all reason and Coralie rubbed her aching breasts against his chest. He groaned his approval, his fangs glistening white in the dim light. Coralie shuddered in sensual overload when he pulled her shirt up and bit her nipple through the lace of her bra. He soothed the sting with his tongue, his strong sucks shooting down to her clit. She almost screamed in disappointment when he pulled his fingers away. He smiled at her and shook his head at her fevered moans of denial.

He pulled both their jeans down with movements too fast for her to catch. The cool air hit her heated flesh when he raised one of her knees. Pushing her underwear away, his cock slid into her, the cool stretching sensation alone almost sending her over the edge.  She clung onto his shoulders as he thrust into her, his tongue mirroring the actions of his dick buried in her so deep, every movement hit her womb and stroked along her G-spot. She screamed her release into his mouth and his hands on her hips tightened as he groaned his own climax.

Lost in the aftershocks zinging through her body, Coralie missed Jerry's door opening. In the blink of an eye Lucas had them dressed, and Coralie found herself staring into the confused eyes of her best friend.

Heaven only knew what she must look like.  Probably quite similar to Jerry, who looked her up and down with an incredulous expression on her flushed face. Wearing nothing but a man's shirt, the long legs Coralie envied bare, Jerry looked as though she had just fallen out of bed. Coralie's blush deepened, recalling Lucas's earlier words. Clearly Jerry had just fallen out of bed with the half-naked hunk standing behind her. Jenkins's amber eyes held a hint of his wolf as he ran his gaze over Coralie's body. His nostrils flared and he smirked, before Lucas's growl wiped his face free of any expression.

Jerry's eyes widened at that growl and Coralie wished the floor would swallow her up. Good God, in all the time they’d known each other, she'd walked in on Jerry more times than she could count, but never the other way around. Talk about embarrassing.

Before Coralie could force any words past her lips, still swollen from Lucas's kisses, Jerry laughed and drew her in for a hug.

"Don't just stand there, you ninny. I reckon you've given the neighbors enough to talk about for one evening. Come in and bring Mr. Delicious in with you."  Jerry glanced up at Lucas with a coy smile whilst pulling Coralie into the flat. "You must be something to get Coral here all hot and flustered."

"Jerry, please, this is embarrassing enough." Coralie rolled her eyes at her friend.

Jerry responded with another gale of laughter.

"Really, Coral, the hallway? And there I was thinking you were a lights-out, under the sheets only, kinda girl." She shut the door and beamed at Lucas. "Well, whoever you are, I like you already for helping Coral relax a bit. It's been far too long since she's let her hair down…or should that be her knickers out?"

Other Books in the Lure Series:

Lure of the Blood

Lure of Forever is the second book in Doris O&#039;Connor&#039;s Lure series. Me being me, I accidentally read this one first. However, it didn&#039;t matter at all as the story stands perfectly well alone. This paranormal erotic romance tells the story of Lucas, a three thousand year old vampire, and Coralie, a human. She&#039;s standing in as a strip-o-gram for her friend when she accidentally gets onto the wrong boat, which is inhabited by Lucas and his friends - none of whom look very pleased to see her. Rather than backing off and going on her way, Coralie becomes engaged in a bizarre conversation with Lucas - who is some kind of weird vampire wannabe. Before long she&#039;s dragged into Lucas&#039; business which sounds dangerous and totally none of her business. Unfortunately, her unwanted attraction to Lucas means she&#039;s not quite on form and before she can run screaming for the hills, it&#039;s too late. She quickly discovers Lucas is a bona fide vampire, which throws her belief system into turmoil. Add to that the fact that Lucas and his buddies are saying she, her friend Jerry, and Jerry&#039;s daughter are in grave danger from a demon, and it&#039;s a wonder Coralie doesn&#039;t lose her mind. But she&#039;s a much tougher cookie than that, and is determined to protect those she holds dear - a list which, she soon realises, definitely includes Lucas. As I said before, it didn&#039;t matter that I hadn&#039;t read the first book in this series, but having enjoyed this one so much, I want to read it anyway! Doris O&#039;Connor writes beautifully. In this book, she successfully portrays emotion, sexual tension, danger and so much more. I was so riveted that I whizzed through the book in a couple of days, desperate to know the outcome. And, without giving anything away, let&#039;s just say it doesn&#039;t disappoint. Overall, a super hot, action-packed paranormal erotic romance with a hero to die for! *swoons* - I&#039;m looking forward to reading more of Doris&#039; work.

Lure of the Blood by Doris O'Connor