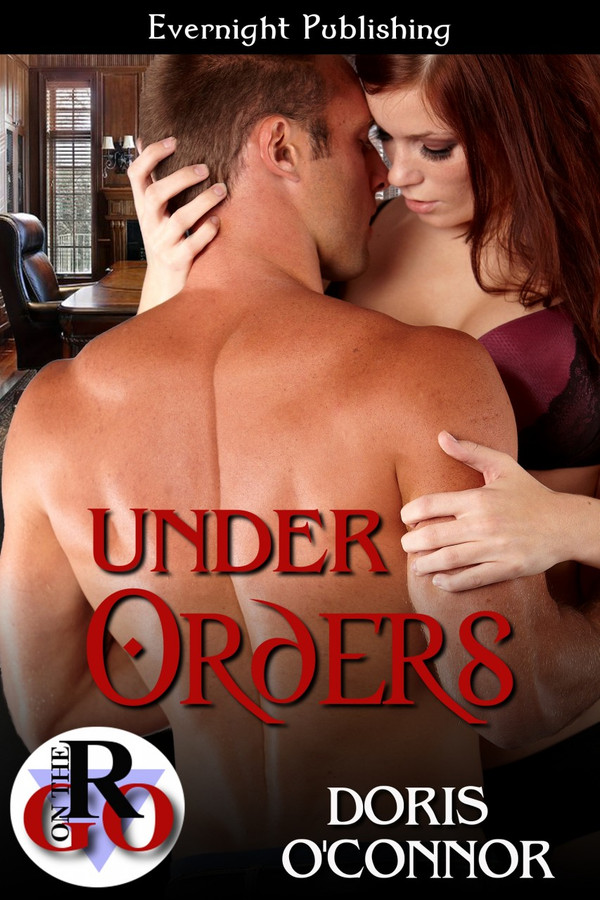 Whoever heard of being ordered to wear vibrating panties to a business meeting? The visiting CEO may be sex-on-legs-gorgeous, but Anna knows a sexual harassment case when she sees it. No one is going to order her to entertain Jonathan Symmonds—no one but her own body it seems.

Jonathan proves a hard man to resist. When he reveals his secret identity, this daughter of a slayer ought to be running for the hills not play submissive to his dark side.

Will passion and a shared past be enough to keep them together, or is their bond doomed to end at the stake?

Clearly it had been way too long since Anna had last gotten laid if her body could respond to a complete stranger in this fashion of reckless abandonment.

He turned his attention back to the room, and Anna released the breath she’d been holding. Brian glared at her, and that uneasy feeling in her stomach returned. She squared her shoulders and stared him down, before Jonathan’s hand on her thigh pulled her attention back to him.

“I would like to thank Anna for her diligent attention to detail in drawing up these reports.” He shifted his hand higher during those few words, until he reached the top of her stocking. Digging one finger underneath he caressed the soft skin of her inner thigh, and Anna forced herself not to squirm and give the game away. “She has been most thorough, and the results will show once and for all who is responsible for this current … mishap.”

He smiled briefly, and looked toward Brian. The older man shrank in his seat. His Adam’s apple bobbed wildly as though he could barely hold onto his saliva. Beads of sweat broke out on his ruddy complexion, and Anna was half expecting the pencil he clutched to splinter under the strain of his white knuckled grip.

“I also feel the need to make it clear that Anna acted under direct orders from myself and her immediate superior.” He nodded toward Anna’s boss, and Leonard Peterson shifted to stand behind Brian, his expression as grave as she’d ever seen it.

“No one here should have any reason to hold the findings of this report against Anna.” Again he paused, and his penetrating gaze swept around the room until he seemed satisfied that he had everyone’s undivided attention. At the same time he shifted his hand higher up the inside of her thigh, until his knuckles brushed against the damp fabric covering her slit. Anna bit her lip to stop herself from moaning. The feather light touch seared her core, and her internal muscles clenched in need. The fabric grew wetter, and he was bound to notice. She risked a peek at his profile, and the slight elevation to his bottom lip told her that he knew exactly how turned on she was.

He took a deep breath and brushed his forefinger against her clit, pressing down just enough to make the little nubbin tingle in anticipation. That smirk of his deepened, when she couldn’t help her involuntary jump in response.

“Likewise no one in this room has anything to fear from these findings, unless they have not been acting in the company’s best interests. If you have indeed been mishandling funds then now would be a prudent time to own up to this fact.”

Again he paused, and Anna held her breath. He looked every inch the ruthless and dangerous business man he was reported to be. His harsh features had drawn tight, his high cheek bones accentuated under the artificial lighting that filled the room, despite the blaring sun outside the windows overlooking London’s skyline. He held himself perfectly still, the muscles bulging in tension under the light summer suit he wore. Only his finger moved in slow, measured circles, designed to drive Anna to the brink of insanity. She grasped hold of her armrests again, and coughed to hide her moan as that finger slipped under the elastic of her underwear and teased her entrance.

“I-I—” Brian shot out of his chair and looked as though he would have made a run for it, had Leonard not grabbed him by the suit lapels and pinned him against the wall. The door burst open, and two burly security guards took over and dragged Brian from the room. Anna was barely aware of the ensuing commotion, because Jonathan chose that moment to thrust two fingers knuckle deep inside her channel. Her pussy walls tightened around the digits, and Anna shut her eyes against the rising sensation deep within. There was something so deliciously naughty about the CEO finger-fucking her under the table.

“Leonard, get Anna a glass of water. She is looking a little flushed.”

Her eyes flew open at the amused words, and she knew her cheeks must be as red as the roses in the vase across the room, when her boss stepped close enough to her to see exactly what was happening under the table. Jonathan did not release her. If anything he stepped up his assault, curling his fingers in such a way that he massaged her sweet spot deep inside.

Leonard cleared his throat repeatedly, and the water splashed over the side of the glass he was pouring for Anna, masking the wet sounds of Jonathan’s fingers thrusting in and out of her sopping cunt. She would leave a visible stain on her skirt and chair at this rate, but Anna could no more stop herself from climbing towards bliss than she could stop breathing. She dug her fingers into the arms of her chair and bit her lip so hard she drew blood, as her orgasm hit her with the full force of a speeding train. Irrespective of where she was, or perhaps because of it, waves of pleasure crashed over her, as her body shook in delicious aftershocks. Jonathan did not withdraw his fingers until the last of her shudders stopped, and when she opened her eyes it was to find the room empty, bar the three of them.

Anna is ordered to attend a meeting and is told what to wear. But dressing ‘sexy’ isn’t professional in her mind, and being told ‘no underwear’ by her boss is way over the line. Jonathan is a CEO who demands more than the typical boss. He has a secret, he’s not what he seems to be. After a very explicit boardroom meeting that leaves Anna wondering why she hasn’t quit her job. After many sleepless nights she finds herself yet again in Jonathan’s company What will she learn about him, and will it change everything? His secret rocks her world and it could prove to be the end of everything. At the start of this story I wasn’t sure what to expect and the blurb gave nothing away, so his secret was a surprise. But what a great surprise it was.

This is a hot quick read and boy did I enjoy it. Perfect length for an afternoon read. The story pulled me in and I read faster and faster. It has easy to love characters, smokin&#039; hot sex scenes, and an epilogue that I really loved. The book starts at Anna&#039;s work were things get hot in the board room. From there you&#039;ll be on a quick ride as Anna tries to deal with her feelings and soon she finds out something more is happening. Answers to life long questions are revealed. Favorite Quote from Anna&#039;s thoughts: While sex with him would no doubt rock her world, he also had the ability to rip her heart to shreds. The story will warm your heart. It&#039;s quick and it&#039;s hot. I recommend it. :)

Not a big fan of the short story, &quot;Under Orders&quot; held my interest from the first word to the very last. An easy read, there was enough hint of something to keep me reading to the end without a single stop. But that last chapter [not epilogue]? Wow!! What an unexpected twist in the story, one not at all prepared for but oddly quite satisfying. The whole short piece was masterfully crafted. Looking forward to reading more from this gifted writer.

Under the Alpha's Protection by Doris O'Connor

Under His Protection by Doris O'Connor