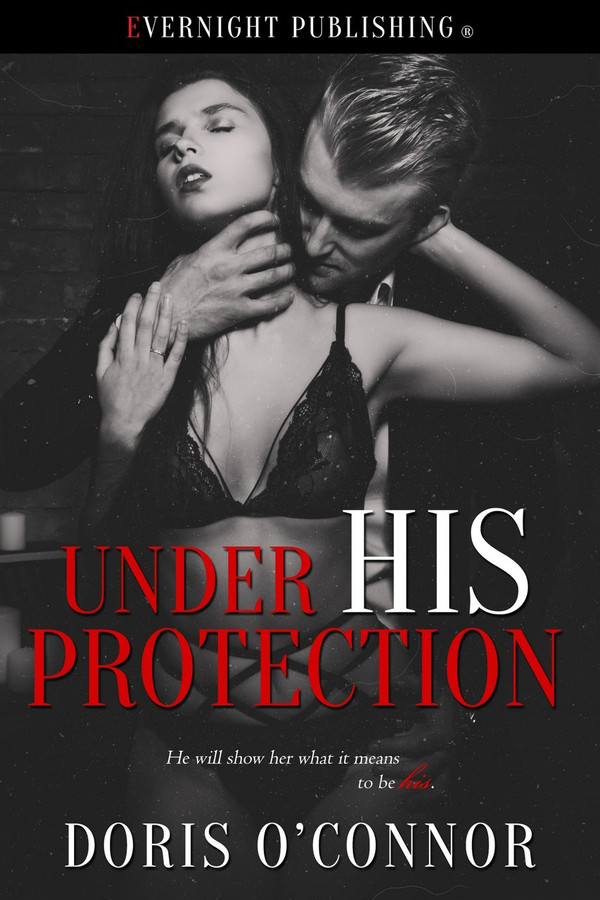 Now, a birthday spanking sounds like a mighty fine idea. Especially if it’s going to be delivered by the one man she’s been secretively lusting after for weeks—her melt your panties in an instant, bad boy neighbor.

Lukas Markz can’t believe his eyes when his shy, goody-two-shoes, next-door neighbor turns up at his club, dressed as every Dom’s wet dream. He doesn’t do commitment, but witnessing her submission brings out his inner caveman. No other man is going to get to mark her soft skin or listen to the sounds of her surrender. This bundle of curves is under his protection, and he will show her what it means to be his.

Going on instinct and the very real need to touch her, Lukas stepped up behind her. Putting his hand over hers on the glass, he grasped her hip with his free hand, and kicking her legs apart with his foot, pulled her flush against him. There was no way on Earth she would miss his raging boner, and, sure enough, another one of those cock hardening groans came from her.

Lukas brought one of his thighs up and between her legs, and it was his turn to groan, as the wet heat of her pussy seared his thigh even through their combined clothing.

He dropped a kiss on the rapidly beating pulse point in her neck, and grazed his teeth along the sensitive flesh. Gooseflesh erupted on Jacqui’s skin, and her hips flexed, as though she was trying to gain purchase on his thigh. When he rubbed that limb up and down her sodden crotch, she gasped, and put her other hand on the glass, too.

Her heartfelt plea only served to make Lukas harder, and grasping her hips with both hands he lifted her up. With her feet dangling off the floor, her whole weight rested on his thigh, and she tensed when he slid her up and down his leg.

Head down, so that her hair obscured her expression, it was still pretty damn obvious that his naughty little dove was fast hurtling toward release, and it was suddenly imperative to Lukas that she did. Never in his wildest dreams would he have thought little Miss Goody Two-shoes would be this responsive, and it was fucking hot to witness. As was watching Jake and Lauren, when he flicked a glance over to the action.

“Head up and watch them, little dove.”

Letting go of her hip for a moment, Lukas fisted his hand in Jacqui’s hair. It effectively forced her to look up and see what was going on.

He grinned at her response, and resuming his slow slide along her cunt, nuzzled into her neck. “Such language from you, girl. Keep that up, and a spanking won’t be the only thing you’ll get from my hands. Maybe that’s what you want though?”

He pulled back just in time to see Jake reach between him and Lauren, and grasp the end of the butt plug decorating his sub’s ass. He thrust that object in and out of Lauren’s clenching hole with one hand, while he continued fucking her pussy, and Jacqui whimpered.

It made Lukas speed up the friction he created between her legs, and his jeans grew damp with his girl’s arousal. The sweet musk of aroused woman filled his nostrils, and he pressed his advantage.

“Is my naughty girl imagining that was her cunt being fucked?”

Another little mewl escaped her, and Jacqui locked her arms better to push back against him.

Lukas bit down on the perspiration-soaked flesh in front of him, and she gave a strangled groan that made his cock twitch in need.

Soothing the red mark away with his tongue, he yanked her head sideways so that he could kiss her. Her gasp of surprise gave him access, and Lukas grunted his own need when she kissed him back. Hesitant at first and then with ever bolder strokes of her tongue, that meant he had to break the kiss, before he took her right here in the corridor, where anyone would come across them.

While that idea had merit, and his cock was all but screaming at him to claim this woman, he forced himself to pull back.

Breaths seesawing in and out, her corset had slipped with the force of her breathing. It now revealed the edge of her areolae. It made Lukas want to lean down and trace his tongue along the pebbled flesh to coax out the tight nipples poking through their restraints.

He did neither however, just drank in the sight of his woman, and dammit, she was his, even if only for tonight. Face flushed, kiss swollen lips parted, she looked breathtakingly beautiful, and his chest tightened with a rush of emotion he didn’t dare quantify.

He grimaced at the rough timbre of his voice, and watched in rapt fascination as her eyelids fluttered open. If he had any doubts about how aroused she was, the evidence was there in her hugely dilated pupils. Only a small ring of blue remained around the outer edges, as she tried to focus on him.

He smiled, and pulled her head back round toward the glass.

A soft, needy, sound escaped her. It was so damn fucking hot, as was the action on the other side of that window.

Lauren shook and shivered, her mouth open in a scream they couldn’t hear, as she was reaching her climax, and the rosy flush of her release could be seen all over her body.

Jacqui’s whisper turned into a groan when Lukas resumed his slide along her cunt, and she jerked. Behind the glass, Jake pulled out the butt plug at the same time as he pulled out of Lauren’s wet cunt. Aligning himself with her gaping butt hole, he thrust in deep.

Jacqui stiffened in front of him as Jake set up a ruthless rhythm. One that Lukas mirrored with his thigh, while he continued to whisper to his girl.

“Imagine that’s you, tied for my pleasure. Your butt is still sore from your spanking, and your cunt well used, while I claim your sweet ass. Ever taken a man up the ass, little dove?”

There&#039;s something so incredibly sexy hearing a very male voice call his submissive &quot;little dove.&quot; Sort of gives you that squishy feeling deep inside followed by a resounding, &quot;awwwwww&quot;. In UNDER HIS PROTECTION by Doris O&#039;Connor, we meet Jacqui, housesitting for the McKennas and her heart pounding, gorgeous neighbor, Lukas. For Jacqui&#039;s 35th birthday, her friend decides to take her to the local BDSM club so she can get a birthday spanking and things don&#039;t go according to plan but yet, they are definitely so right. Likes: Jacqui is as brave as she is flustered, or rather tongue-tied with a hefty dose of sass. Lukas is as downright sexy as he is dominant. The story flows well and the pace is smooth. Both Lukas and Jacqui are great together; add in her friend, Lauren, and Master Jake, and we have the makings for an enjoyable afternoon read. Or evening. Or, really, whenever. This is a hot, sexy story with a touch of kink, a mound of blushing, and a large amount of swoon worthy moments that will have you wanting to read it again as soon as you finish. You might even find yourself wishing for your own birthday spanking. - See more at: http://erotic.theromancereviews.com/viewbooksreview.php?bookid=24907#sthash.eUylyL7c.dpuf

Jacqui and Lukas just about melted my kindle. This wasn&#039;t a long read but Doris packed enough action in the story for it to feel longer. That&#039;s the sign of a good author in my book. Birthday wishes do come true.

Time to break out the party hats! That really good chocolate! (I’m a fan of Cadbury’s myself) And if you are really adventurous, the whips and floggers! Doris O’Connor has a new book out and it’s time to celebrate! (Ok, it was in an anthology, Dominant Persuasions (no longer available) Now, you can get the re-edited story, Under His Protection, and trust me, you DO! It’s Jacqui’s 35th birthday and all she wants to do is hang out at home with her tub of ice cream, but her friend Lauren decides it’s time for her to stop reading about her fantasies and live them out. She takes her to a BDSM club where she first gets hit on by the bouncer, then she finds out that Lauren set her up, last, and certainly not least, she finds out her neighbor she has a crush on is her Dom for the night. Lucas is shocked to find his neighbor at the club, and even more shocked to find out she’s there for birthday spankings. There’s no way he’s letting another Dom give them to her, and there’s no way he’s letting anyone see her get them but him. But Jacqui has seen numerous woman coming out of his apartment, does she really want to get involved with a player and have her heart broken? Despite this being shorter than most, this was an excellent read! I loved both of the main characters and how they interacted with each other. And as always, Doris writes the most incredibly hot D/s ever! I end up needing the chocolate and water afterwards!

Always a plus when there is an interesting story to go along with a hot romance. Another great story by Doris O&#039;Connor.

Jacqui is house sitting for a couple and has been lusting after the handsome next door neighbor. She knows she wouldn&#039;t have a chance with him as she has been seeing all the women come and go from his house. When her friend drags her to a BDSM club for her birthday and she comes face to face with Lukas, will she have the courage to go through with his suggestions? Lukas can&#039;t believe the sexy woman in front of him is his next door neighbor. Little does she know he&#039;s been having lots of sexy thoughts about her and now that she is under his protection, he intends to see if she is willing to follow through on what her body is telling him. This is a wonderful story of two people coming together after not understanding each other. Lukas is HOT as a Dom and Jacqui is such a sweet lady with naughty fantasies that you will find yourself rooting for them both.

What a wonderful story! Hot, fun, romantic. Everything you could want in a book. Doris O&#039;Connor did it again. Did I mention HOT?

Under Orders by Doris O'Connor

Under the Alpha's Protection by Doris O'Connor

His Prize by Doris O'Connor