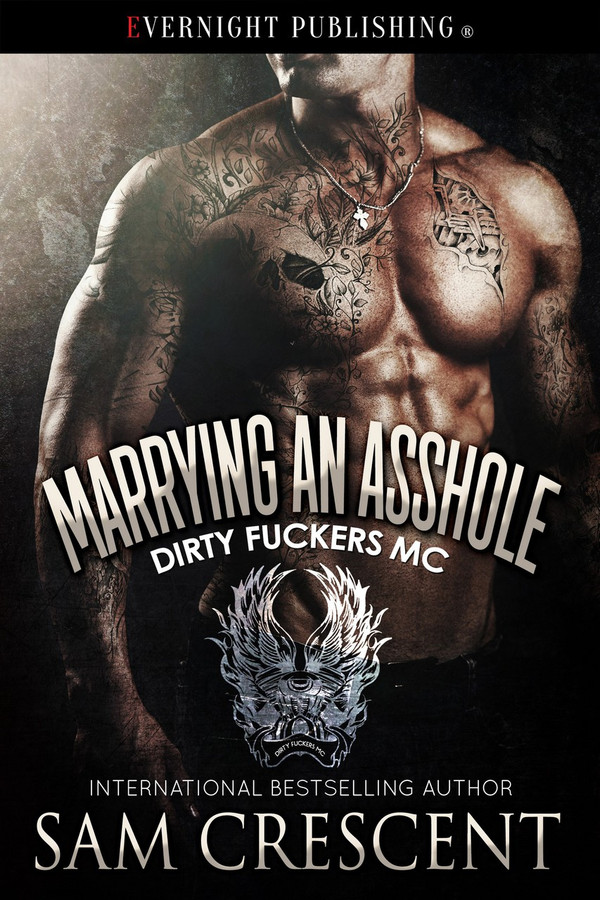 Come and party with the Dirty Fuckers MC...

We guarantee great sex, variety, and, above all, fun. Interested? Come in and party.

Pixie is used to women falling at his feet, begging him for his cock, or anything he can give them. He was happy with that, using his brother to deal with the ones that clung too long. Then he met a fiery red-head named Suzy, and nothing has been the same. She wants nothing to do with him, and thinks he’s a total asshole. And she's right.

When Suzy caves to Pixie, she doesn’t want anyone else to know, and so demands he keep their one-nighter a secret. One-nighter? Yeah, right. She’s under his skin, and Pixie can’t stand the thought of being with anyone else. He hates the thought of another man touching her, and so he sets out a plan for her to fall in love with him without anyone else knowing about it.

Pixie fears Suzy will leave him, so he takes the next step to securing his future with the woman he loves. If she’s pregnant, she won’t go anywhere, right? At least that is what he is hoping for. When it’s too late for Pixie to realize his mistake there’s no time to fix it. Will Suzy still love him even after learning his deception, or will she push him away? Is there any way to love an asshole?

“I’m going to give you a bit of a reality check right now.”

“Shut up. I’ve done a lot of shit for you over the past year. I’ve kept us a secret, and it was you that told my brother today. Now, yes, you were a virgin, and I wasn’t expecting that. I admit it freely.”

She went to argue with him again, but he stopped her by pressing his palm over her face stopping her.

“I told you to shut up, and I meant it. You can talk back to me when I’m done but until then, shh!”

Suzy wanted to glare at him but relaxed, waiting for him to finish.

“You being a virgin took me back, but I like it. I know I’m an asshole when I say this, but I like the fact no one else has touched you. You’re all mine, and no other man will ever know how damn hot and sexy you are. I mean it, Suzy. I haven’t touched another woman since I’ve been with you, even before I’ve been with you. I got you the chocolate as a joke, and hoped we could share it. I want to do everything with you, know your whole body.” Slowly, he removed his hand. “I’m speaking the truth.”

“Yes. I didn’t even think of other women.”

“I believe you. I overreacted.” She ran fingers through her hair. “I’m so sorry.”

“You don’t have to be sorry. Just allow me to actually talk to you.”

Late that night Pixie stared up at the ceiling with Suzy curled up against him. He’d seen the sadness in her eyes, and also the fear. She really didn’t think she was good enough for him, and that was so far from the truth.

He wanted to own every single part of her, all the time. He couldn’t even recall a time when he didn’t think about her, need her. James and Drake had each talked about their need, and he’d always thought it would be a nightmare. Never had he known jealousy like he did with Suzy. When he’d visited her at work, it had driven him crazy watching men flirt with her.

She never saw it, but then, she wasn’t a guy.

Turning to look at her, he stroked a finger down her cheek. She sighed, and snuggled in against him. He should leave, but each day that he fell asleep with her in his arms it got harder to leave her.

After their little argument, they had eaten something, watched a little television, and then made love well into the night.

Suzy sighed and ran her hand across his chest. “Are you leaving tonight?” she asked, startling him.

“I thought you were asleep.”

“I was.” She held him a little tighter. “You don’t have to leave if you don’t want to.”

“You’re the one who always left. I never actually told you to.” She rested her head on his chest. “You’re so comfortable.”

He didn’t want to leave.

It was good to see that some chick wasnt gonna let some big bad alpha biker sweet talk her pants off. Suzy was a strong character and stood her ground when it came to him and I loved it. The way she made Pixie work for HER was awesome. I thought it was kind of cute that he was trying to trap her into staying with him when most of the time its the other way around. I cant wait to read more in this series.

Suzy has led Pixie on a merry chase believing that the asshole only wanted one thing and when he got it he would be gone. She knows he is an asshole but figures if she is going to rid herself of her virginity who better than a man who has plenty of experience getting the deed done. What she expects to be one night turns into something she could never imagine. What do you do when everyone thinks you are an asshole and life is easier that way? You keep on keeping on that is what. Well, until a female comes along and knocks your world sideways. Pixie was unprepared for the changes Suzy will bring to his life and if you had asked him before who would said it could never happen. Pixie is willing to do whatever it takes to keep Suzy, but whatever it takes may be the one thing to cost him it all. Will Suzy be able to forgive Pixie and see his actions as a sign of his love, or will she see it as evidence that once an asshole always an asshole? I love the characters in this book; Pixie is so lost and Suzy is one strong lady unwilling to be seen as another notch. The struggle between this two was exciting to behold and though the story was outstanding I found I just wanted more, more, more. The writing of Sam Crescent is truly superb and I warn you once you start reading her thrilling stories you will be hooked for life. Welcome to the World of the Dirty Fuckers MC.

Another great read in this series by the fabulous Sam Crescent! Pixie gives new meaning to arrogant male, he will get under your skin in the other books within this series and at times you want to shake him but in this story we get to see another side to the bad boy biker and it is nice to see the less irritating more human side of him. A side that he seems to only show to Suzy and she is the only one who can bring these characteristics out in the lovable bad boy. I enjoyed the story a lot and also catching glimpses of some of the other members of the crew from past and future reads. I am excited to see what this series has in store for future reads! Happy Reading!

I loved this book the best so far in this series. I laughed.cried and fanned myself with the sex. We saw these bikers in a new light when Dane returned. Really want to see Kitty Kats story I know it will be a good one too.mimi

I so loved this one !! Pixie went from being a complete ass to a really big sweetheart !! At least as far as Suzy was concerned. It was so great !! Not to spoil anything, but when you get to a certain part of the book you&#039;ll see why I headlined Awwww !!! Looking forward to more Sam !!!

I absolutely ❤️❤️❤️❤️❤️❤️❤️ this book. I would give it more stars if I could. I really like this series and the the writing is on point. The characters are very likable and I am such a sucker for this couple. I could relate on so many levels. Being with someone who you know is bad for you but you want to be with them anyway. Pixie and Suzy great chemistry, great romance, great couple.

Pixie is a bad boy who loves women. Suzy is a woman who thinks no man would want her for a long term relationship so when the two hook up, she&#039;s not expecting anything long lasting. Slowly Pixie is discovering that he actually likes being around Suzy and he is surprised to find himself jealous of whoever looks at her. At the same time, she doesn&#039;t want anyone to know they are &quot;seeing&quot; each other. This story takes place over a period of time but it flows very smoothly and I just got sucked into the story. What he does to try and secure her staying with him was downright wrong for a man to do but I understood why. Will Suzy understand? Or will she push him away? Get the book and find out! Loved it!!

I love all of Sam Crescent&#039;&#039;s MC books but this one just really made me smile and heat up as well. I loved the transformation of Pixie and how the relationships of previous characters evolved. Can&#039;t wait for Leo and Paul&#039;s story.