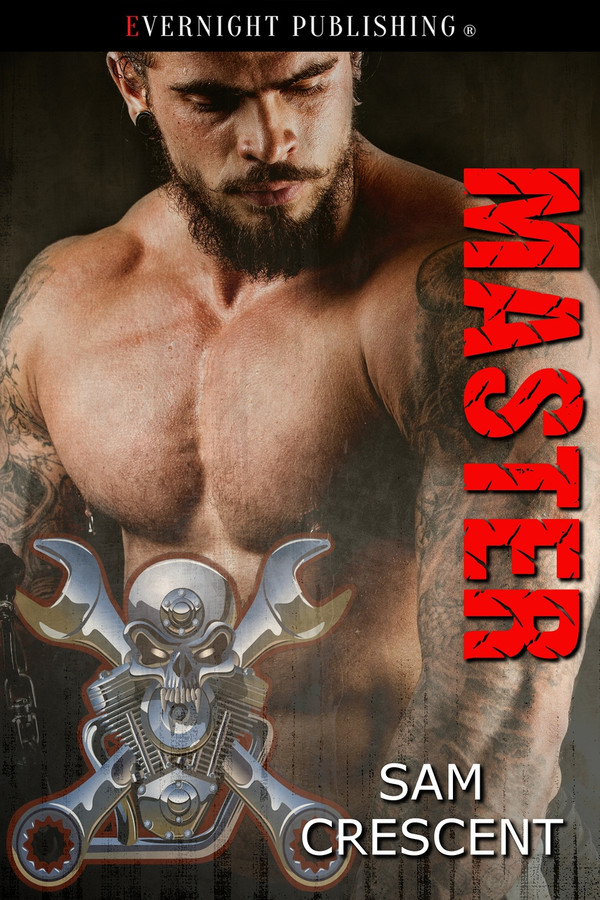 Master has plagued The Skulls and Chaos Bleeds for a long time. He has sent Gash to Prison, taken Paris, raped and murdered innocent men and women.

Now after a mass shootout ordered by Master injures many and even kills a couple of their people, Lash is done waiting. With Whizz’s help, he is determined to finish this.

Even as Master’s attacks cause their world to turn upside down, Stink wants Sandy. He has always been in love with her. From the first moment he saw her, he knew she’d be the woman he married. Now with the latest attack putting them all at risk, there’s no way he’s going to let her go, despite how she has fought her feelings for him. Sandy can’t bear to lose Stink, either. Even with their world falling apart, Sandy wants him.

Spider is haunted. The woman he loves is being hurt while he sits around, too injured to do anything. Paris was taken, and he can’t find her. He wants to fight, to get her back.  Master has to die.  Paris needs to be saved. The clubs need to win.

But can they—and what will be lost in the process of protecting them all?

**This is a The Skulls and Chaos Bleeds crossover novel**

He lived thirty minutes from the clubhouse, close to Lash and Angel, Tiny and Eva. It was his own space, a three-bedroom house with a backyard that also had a pool. Stink enjoyed life’s luxuries, which was another surprise about him. She thought he’d be a slob at home. It hadn’t been the case. Also with his lack of smell, she could enjoy smelly cheeses, garlic, and every kind of food delight imaginable. He never complained.

That is because he loves you.

She climbed off his bike first, pulling the helmet off her head, and taking a deep breath. “I really hate wearing a helmet. Can’t you get me to wear something else?”

“We kill Andrew, you get to ride without a helmet.”

“Do you really think that is possible?”

“To kill him?” Stink asked.

“He’s a guy, not some devil in disguise. We’ll find him. Whizz just needs to do his thing.”

“It’s hard for him to do when he’s worrying about his kid,” Sandy said.

“Once again we’re talking about stuff that I don’t want you to worry about.” He entered their home, stopping her to kiss her head. “Stop worrying.”

“Doesn’t it concern you that he was able to take two women? Paris and Celia.”

“First, we’ve got Celia back. Second, we’re going to take Paris back. Third, no one was watching them. They were an easy target. We’re not going to let that happen.”

“Just once I think I’d like a life without drama, without worrying if I’m going to get my face blown off, or if I’m going to watch my friends get blown apart.” He cupped her face and pressed a kiss to her lips.

Sandy loved the feel of his lips against hers. Wrapping her arms around his neck, she pushed him back just a little, kicking the door closed as she did. Her pussy grew slick, and need took over.

For a long time she had been holding back these feelings for him, but she didn’t want to hold back anymore.

She stepped back and tugged her shirt from her scrubs. “Now.” Wriggling out of her bottoms, she stood before him in a lace bra and panties, desperate for his touch. Stepping up to him, she ran her hands beneath his jacket, against his chest. “Please. I want you.”

He stroked his thumb across her cheek.

“Are you sure about this?”

“This is what I’m sure about. You, us, this, it’s what I want.” Leaving one hand against his heart, she glided the other one down, cupping his cock. He was rock hard, and she smiled. “You can’t tell me you don’t want me.”

In this installment featuring the Chaos Bleeds, it is utter destruction in the aftermath. With members dead and injured, the MC is forced to regroup. Sam Crescent delivers a pulse-pounding eighth installment of the series in MASTER. My preference would be to package this story together and read it from start to finish. Readers who have missed the other installments will not have a good foundation, so this story must be read in sequence. This series is not for the faint at heart. It features a significant amount of violence which makes sense since this is an MC story. Readers may also find there are some triggers involved with the trauma that Paris experiences. Read as a series, this is an incredible story. As a standalone, it can be overwhelming.

WOW! .... Just WOW ! Words cannot express how much I loved this book! I have always been a fan of The Skulls and Chaos Bleeds Series&#039; by this amazingly talented author and am constantly surprised and drawn in with each book of each series with what happens next as each couple&#039;s story is told. This book is just what was needed to bring the clubs back together as friends to stand side by side exactly where they should be to face off with their arch nemesis Master!!!! Filled with action, humour, camaraderie and oodles of passion from these totally gorgeous badass bikers and their beloved old ladies! I loved the story over all but also all of the smaller stories running through the book as each couple is shown and how they as couples and as clubs are dealing with their retribution towards Master and also the fallout from their actions and his. There are scenes of love and happiness, hurt and anguish, you will laugh, you will cry, you will definitely need a fan as some scenes are incredibly HOT .... you will again fall in love with each and every member of the clubs and be eager for more before you even reach the end. This author has a way of telling the story of these two clubs which sweeps you away and you find you don&#039;t want it to end. I loved the length of this installment and wish that all of this authors books were like this because they are so good, I never want them to end. I loved the individual sections of seeing each couple as I said above, I loved seeing it then wish they were told in their own books because I just did not want the stories to end as soon and waned them to be told in more detail, I love that we are seeing the set up for the next generations of the clubs to be told but also wanting it to hold off as I still have hopes for these characters to have so much more to do and say. These are some of my favourite characters and I never want either of these series to end. I really cannot express in words how great this two series as a whole and separately are, how much I love each character and book within them. I would highly recommend this as a read for you but also advise that you must read the whole of The Skulls and Chaos Bleeds books in order to appreciate this amazing book in all of its glory. This really is a credit to the talent of the author. Well Done Sam! Thank YOU for a great book and two amazing series&#039; (plus all you other books lol). Happy Reading!

To me this was beautiful . It is full of action in the beginning and then the rest is the healing. It feels like goodbye to these people we have grown to love to read about. I hope not. There is so much more to be told about these two clubs.

Sam has done it again and delivered an amazing story! I love how we got POV&#039;s from different couples. Can&#039;t wait for more from The Chaos Bleeds &amp; The Skulls.

Overall this was pretty darn good book. I cried a whole lot but there were times my smile was huge! Sam knows how to get me. Glad this whole Master issue was resolved. Cant wait for the next gen books!

Wow just Wow this book was so much more than I could have even began to have imagined! Everything about it was brilliant from the story and the characters. Sighs....such an incredible read! I was so excited for this book. Yes this what you&#039;ve been waiting for Master finally gets what he deserves. Overall great read ! I want more Sam Crescent never disappoints!!!!!!!!

Sam Crescent you never cease to amaze me!! Master was just so beautiful.. wonderful... You kept me wanting more!! I love the fact you lets us see into other couples and how their love is never ending!! I can&#039;t wait to see whats next....

It was nice to see Master come to a end. So much peace between the two MC. This was a long time coming. Can&#039;t wait for the kids story.

Where to start. I laughed, cried, got pissed off and was heartbroken. The clubs have been through so much and they finally get to face Master who has been tormenting them and hurting club members. Time for revenge, MC style! My heart broke for Paris and what she had to endure at Master&#039;s hands, but Spider saved her. There were times I really wanted to reach through my kindle and just smack the crap out of Spider because of his feelings after Paris was rescued but he came around and did right by Paris!! I&#039;m really hoping the both clubs can now get some peace and quiet after everything they have all been though. I loved the epilogs as Sam is setting it all up for the next generation&#039;s stories!! Can&#039;t wait for Simon and Tabitha!!! This is an intense book but very worth reading!!!