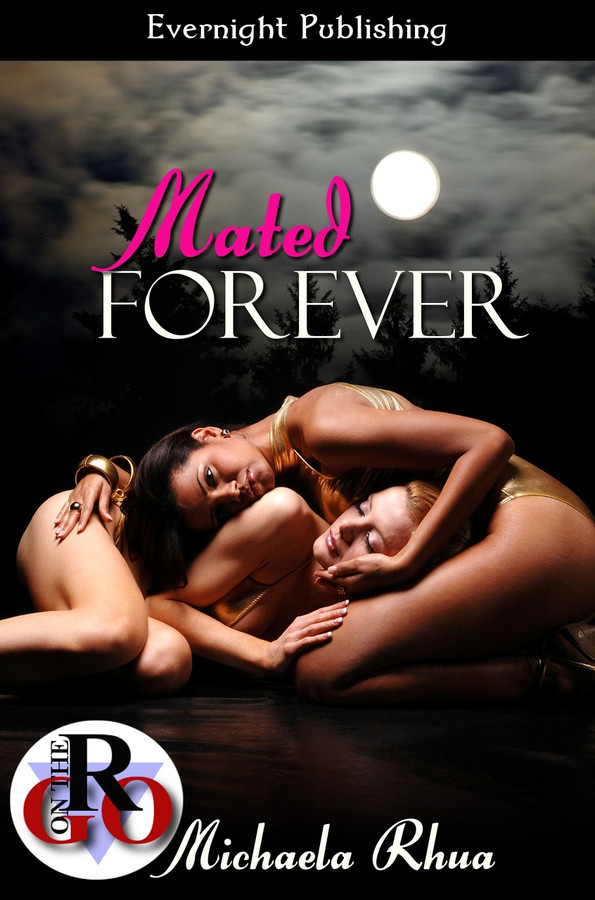 The full moon is always a time for danger and mating. This month it brings the scent of Louisa's mate. Jorie is on the run and in grave danger. Being rescued by Louisa brings safety and a new temptation. As the girls act on their feelings, and passion overtakes them, they are unaware of the danger surrounding them both.

When Jorie is kidnapped, it's a race against time. Will Louisa be able to save her mate, or will the past and all its secrets destroy them before they even have a chance at forever?

"I am so sorry to draw you into all this Lou, I … I didn't mean for it to get this far." Jorie put down the hot mug on the table next to the sofa.

Lou got up from the sofa and disappeared into the bedroom.

Damn it! Jorie kicked herself mentally. Why did I not just do what I wanted to, just touch her. She knew exactly how she felt about Lou. She wanted her as a lover and mate. Things were so complicated now. Sleeping with Malachi had been a colossal error. Every time she looked into Lou’s beautiful brown eyes something melted inside.

The noise of the shower interrupted her thoughts. Jorie fisted her hands and gritted her teeth. Then, with decisive steps, she walked through the bedroom to the bathroom. The door was ajar, almost inviting her in. Once inside, the hot steam fogged her vision. Her eyes adjusted quickly, and she made out water cascading over golden brown skin. Rivulets journeyed their way down the perfect body, which was all curves. Jorie wanted to stroke Lou’s round ass, and kiss it all over. She stretched out her hands. Her skin tightened, and heat radiated throughout her body. She knew exactly what was happening. Her wolf begged to be let out to play with her mate.

Breathing deeply, Jorie stepped forward. The steam cleared at little more and Lou turned around. Jorie stared at Lou's round breasts topped off with dark chocolate nipples, and licked her lips. Lou glanced up. Her eyes deepened then a ring of copper formed around her pupils. Lou continued to soap her body. Jorie watched Lou's hand circle down to her bare pussy with the sponge. Her own pussy ached with need. Lou dropped the sponge and leaned her body into the water, washing the suds off her skin. Jorie wanted to touch her so badly.

Lou turned off the water, and stepped out of the shower. Jorie took a deep breath, trying to get her wolf under control. She wanted Lou in human form, to delight in her body. In her wolf form it would be fucking. Her animal instincts would take over like it had with Malachi. There had been little tenderness. When he’d realized she was willing, it became all about taking her quickly. The act had been painful and cold. Where she’d wanted to take it slow, this would be about making love. She wanted to experience love, an all-consuming love. Tender and soft, not hard and fast.

"You're so beautiful, Lou. I want you so much. I've never felt this way before," Jorie whispered.

"I want you, too, Jorie. Only if you’re sure?" Lou gave her a tentative smile.

Their lips met. Heat surged through Jorie, the air hot and heavy. Lou pushed her toward the bedroom. Jorie delved deeply into Lou's mouth with her tongue, tasting and licking. Her beast growled with delight. This was good, this was right.

Lou pushed her onto the bed then stood over her. A flicker of hesitation registered in her eyes. Jorie undid her jeans, ridding herself of any clothing to reassure Lou this was what she wanted. Words were irrelevant. Lou seemed like watching her strip because intensity deepened her gaze. Once bare, Jorie sat up and held out her hand. Nothing happened. Lou looked at the offered hand. Afraid Lou would back away, Jorie slowly opened her legs. She wasn’t fully bare as Lou, but she hoped Lou would understand.

"I can't wait, Jorie, I have to taste you." Lou licked her lips.

She watched Lou lower her head and inhale the scent of her arousal. Lou growled then pounced on her.

How do you know when you’ve met your soulmate? Even though their relationship moves quickly, Jorie and Lou have great chemistry. Each step they take closer to one another felt like a natural progression to me. More than once I wished that I could continue following their lives as both women are fascinating individuals. While their sex scene was quite well written and erotic, as I was reading it I thought it should have happened later on in the plot due to some things the reader learns about one of the character’s pasts. After finishing the whole thing I came to understand why the author made this decision, though, and I now agree that it was ultimately the best choice for character and plot development. Unfortunately, there are multiple run-on sentences and grammatical errors in this tale. In most cases I was easily able to decipher what the author intended to say, but once or twice the absence of a word or punctuation mark muddled or completely changed the meaning of certain sentences. If not for these issues, this story would have earned a much higher rating. The world building is fairly complex for something this length. I finished it wishing I could know more about the social and political structures in their packs as what I learned about the way their society is set up was sometimes unexpected. A subplot involving something from one of the character’s pasts also added depth to the current conflicts, and while I figured out what was happening with it early on I really enjoyed seeing how everything unfolds. I’d recommend Mated Forever to anyone who loves shape-shifting stories. It’s a great example of this sub genre, and I will be mentioning this book to everyone I know who is a fan of it.

Mated to the Pack by Sam Crescent