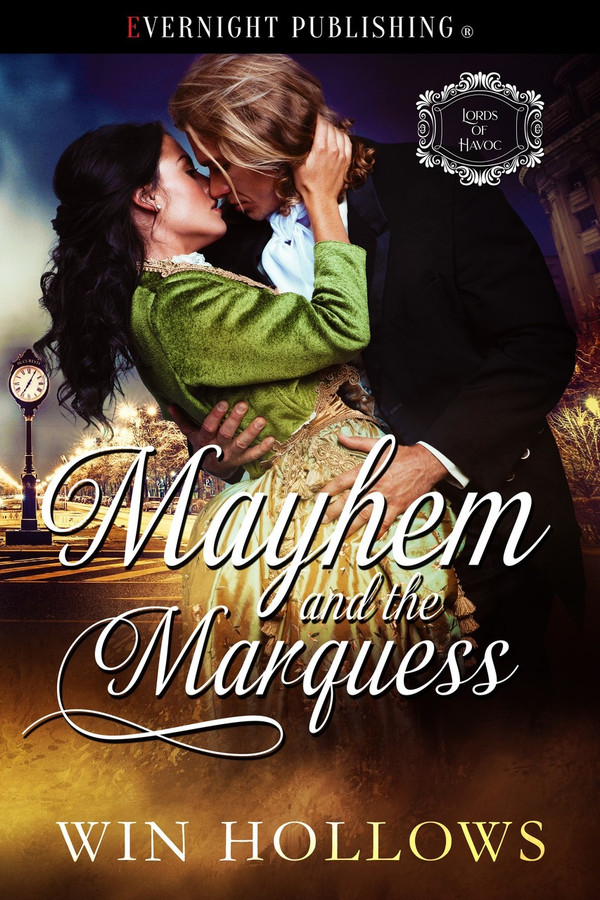 Notorious rake Asher Blackbourne isn’t the indulgent Lord everyone thinks he is. His tenuous control hangs by a thread, but when Ivy bursts into his life, control has nothing to do with the fire she ignites in his blood.

Ivy Wollard’s welcome in society has long been revoked as the daughter of an infamous criminal. So when a risky proposition from the mysterious Marquess of Blackbourne might change her grim future, she finds herself unable to resist his plan or the enigmatic man himself.

Yet as Ash’s scheme creates a forbidden passion, Ivy’s deadly secrets threaten to destroy them as her past becomes a very real and present nightmare from which neither can escape…

Ivy repeated the mantra as the seconds ticked by, and her nerves stretched to breaking point. She wondered if the sound of her pounding heartbeat was muffled or amplified by the water she sat in.

Water she wasn’t sure was completely opaque.

She squinted at the steaming, milky liquid that had been thoroughly doused with the lavender sudsing lather she’d frantically searched for ten minutes ago. She hadn’t been able to produce as many bubbles with the stuff as she’d hoped, but it had turned the water a milky color that she hoped masked any shape of her body beneath the surface.

Also working in her favor was the way the bath was positioned in relation to the gaslight sconces on the wall the chamber shared with the bedroom. Usually, she set an oil lamp on the table text to the tub so she could read by its added light, but tonight, she had purposefully left it unlit to provide less visibility of her person.

If he did try to touch her, she was ready. She eyed the knife that sat beside her book on the tub-side table. It had not left her side since it had been given to her by a boy who had also lived in the abandoned building in Harrogate. He had been two years younger than she, but infinitely better prepared for life on the streets. Each night as the children had gathered around their meager fire pit, he had taught her to use it. She had been a diligent pupil, learning all the motions and tricks her mentor possessed until one day, she bested him during a practice session. He had solemnly presented her with the silver-plated (most likely stolen) knife she now carried, declaring her ready for anything.

Despite that, she suspected she wasn’t nearly ready to face the Marquess of Blackbourne in a different sort of game altogether.

Waiting was the worst part, surely.

She certainly wouldn’t feel as if she couldn’t breathe the entire time. Once he was here, it would turn out to be a perfectly civil and appropriate interaction that would end without incident once he’d satisfied his curiosity.

Who was she trying to fool?

“Perfectly appropriate, my arse,” she mumbled, considering abandoning the entire thing and drying off before he arrived. Yes, that was probably best. He would just have to—

“Arses weren’t part of the bargain, but if you’re offering…” Blackbourne’s voice echoed from the doorway, where he leaned against it till it shut behind him with a click of finality.

Ivy’s heart stopped as she met his heavy-lidded gaze, which was raking over her in thorough evaluation.

He came towards the tub, running a finger along the porcelain edge, and she shrank back instinctively.

She inhaled as his eyes flashed promises of things she knew she didn’t understand.

“And your bathwater is quite thoroughly unrevealing. What a pity.” He sighed, pulling the nearby chair closer to the tub and lowering himself down into it. He crossed one ankle over his opposite knee and leaned back, hands resting on his thighs.

“That’s a relief,” she said, hugging her knees to her chest, just in case.

Blackbourne stared at her for a long moment, and she saw his hands clench into white-knuckled fists on his legs. “You’re beautiful,” he said, the statement floating in the air like the steam that rose from the water around her.

Ivy shivered, despite the heat.

“I’m sure you’ve seen many beautiful women in more revealing states than mine,” she replied, wanting to hear him deny it.

He smiled and did no such thing. “They aren’t you.”

She smiled wryly. “And I would bet you say that to them as well.”

He shrugged, shifting his weight in the chair. “I may have a time or two.”

Was she making him uncomfortable? Good. She took a breath. “Then tell me something you’ve never said to another woman,” she challenged him, letting go of her legs to let her limbs float.

He cocked his head to the side, studying her.

“Or am I not the first to ask that either?” she inquired. She wasn’t going to let him be who she was beginning to realize he was with other women. It would be too easy for him to manipulate and discard her, and there was no way she was going to let that happen, no matter the nature of their relationship.

“You are not,” he said slowly. “But you may be the first woman for whom I want to answer.”

“How do I know you haven’t had this conversation a dozen times before?” She rolled over and came to rest her chin on the edge of the tub nearest him. Her feet stuck out on the other end, but she decided she didn’t care if he saw them. They were only feet.

He smiled, watching her gambol about. “You don’t.”

“Then what is the point?” she asked softly.

Some expression passed over his face and was gone again, but she couldn’t tell what it had been. “Now that is a better question, my sweet, but one I fear I can’t tell you the answer to.”

She rolled her eyes and sighed, propping her cheek on her dripping elbow. “Why is that not surprising? You haven’t even answered the first question.”

“It was more of a demand,” he corrected in dry tones.

“Either way, I feel as if I’ve been much more accommodating tonight than you have,” she pointed out, glancing pointedly down at the bathwater.

He grinned and leaned forward with his elbows on his knees, their faces now only a few feet apart. “I’ll concede that.”

“Mystery is good for the soul,” he rejoined, lips upturned while his ice-blue eyes held hers.

She leaned back in the tub, careful not to let anything below her shoulders rise above the water. “So is telling your employer what you really think of him, but I’ve controlled myself thus far.” She raised a brow.

He laughed and leaned back as well. “Now I have to know. What does the Irresistible Ivy Wollard think of her boss?”

Ivy blushed at the title, which she was sure now made her bright red in combination with the heat from the water vapor. “Now why would I tell you that if you won’t answer my questions?”

“Fine then,” he said, tenting his fingers in his lap. “I’ll you something I’ve never told another woman if…” he paused, and Ivy watched how the gaslight bathed his skin in light from one side. “If you wash your hair for me.”

Ivy blinked. “Now?” she squeaked, reaching up to pat her hair, which she had kept in a high chignon so it wouldn’t get wet.

He nodded, his posture relaxed, although Ivy knew this to be deceptive. He was waiting to hear her answer with taut focus.

She gulped. How was she to do this without showing anything of herself?

As if sensing her trepidation, Blackbourne interrupted her thoughts with a soft suggestion. “Let me help you.”

The words reached out to her with tendrils that wrapped her consciousness in a sensual fog, causing the hair on her nape to rise.

This was not done, she knew. A proper lady would never allow a gentleman to touch her hair, much less while she bathed.

But what about any of their arrangement was proper in the first place? She was fairly certain proper ladies didn’t masquerade as scientists’ sisters or sleep in bachelor residences with no chaperone. And she could still feel the calluses on her hands that were slowly fading—something no lady would have ever had to deal with. She had lived on the streets, worked her fingers to the bone, and shared bathwater with a prostitute on a regular basis.

Why start worrying about what was done or not done now?

Who would even know? Not a soul in the world knew who she was or cared what she was doing besides the people in this room.

So she reached up slowly so as not to disturb the water covering her chest and drew the stickpin from her hair, letting its length fall in a heavy coil down her back.

Blackbourne’s sharp inhalation echoed off the tiles in the silence.

Asher must stay in control or risk the loss of his entire estate and his freedom. He meets Ivy, daughter of an infamous criminal, but secrets threaten to tear their blooming love apart… Historical romance isn’t my normal read but the blurb really grabbed me. This is a great story about Ivy, who is first and foremost a survivor, and Asher, who’s dealing with a traumatic past. Together they have to deal with some dangerous elements. I don’t want to give too much away but this story is full of romance. I really enjoyed it and would recommend Mayhem and the Marquess to historical romance lovers.

Espionage and the Earl by Win Hollows