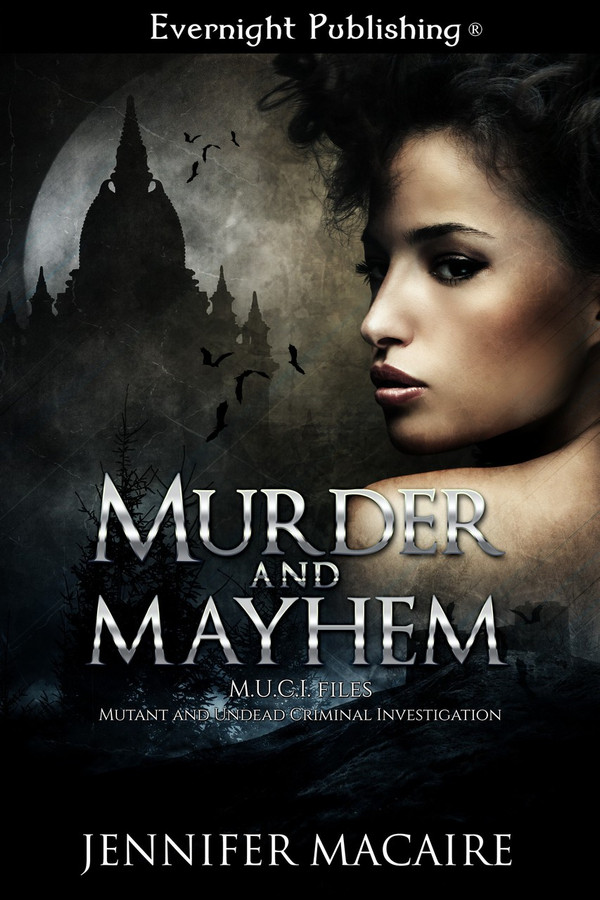 Clues lead straight to Bartholomew Aelfrith, a vampire, whose sense of humor and blond good looks are enough to convince May he needs killing...even if he's not the killer. If he makes one more joke about her chop-sticks, she's going to stab him in the heart with one. The problem is, Bartholomew is the only person who can catch the killer, so May has to put up with his wise-cracks and his penchant for picking up strays.

But if he says, "I've got a plan" one more time, she's going to scream.

May stepped outside and opened her umbrella. The burst of hail had changed to sporadic, slushy rain. It was a glowering, bitterly cold evening. Clouds moved sullenly across the dark sky.

From her street on the hill, she could see the river curving in its gentle S, the two bridges, Christmas Junction where the sky scrapers glittered, and downtown, where she could hopefully find a taxi. The clouds were so low that they hid the top half of the skyscrapers in Christmas Junction. A train, far in the distance, looked like a brightly lit caterpillar crossing the busy downtown area below.

The street she lived on was in a quiet residential neighborhood with old trees and a large park behind a tall, wrought-iron fence. The buildings, trees, and fence all leaned together, conspiring to keep the riffraff out. The sidewalk was clean and the cars lining the road gleamed. No riffraff here tonight … unless that shadow was up to no good.

May tilted her head to get a better look. In between two cars, on the opposite side of the street, huddled a shadow. The hair on the back of her neck prickled. Something was not quite right. The shadow was too small to be a human, but too large for a dog. It slid around to the far side of the car to hide as May drew even.

What was it hiding from? And what was it? May was curious. She closed her umbrella and hooked it over the fence on her left, and then she darted across the street and peered behind the car. Crouching near the rear bumper was a small, skinny boy.

“Hi there. Are you all right?” May started toward him.

He bared his fangs and hissed as she drew near.

May’s step faltered. A vampire child. An abomination! Who the hell had made him? The prickle of fear turned into a full blown shiver. Poor creature. Too young to fend for itself, but dangerous nonetheless. As soon as it realized its powers it would go on a killing spree, and nothing living could resist it. Slowly, she eased her hand into her purse to get her cellphone to call for backup.

“Don’t hurt me,” he whimpered, cowering against the car. His eyes were huge with panic. Blood on his neck and a wet, brown stain on his T-shirt showed he hadn’t changed his clothes since it had happened, and that it had been recent. That was a blessing, at least. The more recently he had been killed, the weaker he would be. She might be able to handle this on her own.

Staying well back, she examined him. He wore no jacket and one of his shoes, May noted, was missing. “I won’t hurt you. Where’s your other shoe?” It was best to stick to unimportant things. Or at least, things that seemed unimportant. At times like this, anything could be crucial. Anything could set him off. She had to be careful. A rogue vampire had made this creature, and its saliva was deadly for anything other than a full-blooded vampire.

May nodded, forcing her lips into a smile. “Yes. It’s a dream.”

Poor creature. He’d been badly made, hastily made, and made against all the laws and rules that governed the vampire clan. Not that they had many rules, and not that they really cared. They followed the rules only because they feared the consequences of breaking them and not from any moral obligation. May moved very slowly, so as not to startle him into attacking her.

“I just want to wake up.” His voice was hoarse and his fangs, sharp as needles, glittered with bloody saliva.

“All right.” May eased her hand into her purse. “I want you to stand up straight. That’s right. Now, close your eyes and say, ‘There’s no place like home.’ Say it three times, and you’ll wake up.”

May took careful aim and drove the stake through his heart.

“There’s no place like … home.” The creature opened its eyes, but they were empty and saw nothing now. He was so slight he fell like a ribbon to the sidewalk, landing without a sound. His bare foot pointed at the sky. It started to rain again, harder.

May is an infamous vampire killer…but that is not the only supernatural thing about her. She’s a zombie with a weak ankle. When abominations start showing up around town, all leads point to Bartholomew Aelfrith, a hunky vampire who is centuries old. The only problem is that Bartholomew is set on proving his innocence and there is a growing attraction between the two. I think the cover is a little misleading. I felt that the character was going to be African American or a mix of cultures, however, she was Asian. That threw me from the cover. Yet, once I got past that, the writing was great. There was a sense of suspense and great imagery. I could clearly see what was going on as I read the book. I wished that Bartholomew and May had met earlier. I liked each of their characters, but the book continued to progress without them seriously getting together for any scenes. Nonetheless, I cannot overlook all the great elements to the story. This is a great paranormal read that takes a fresh look at vampires and zombies.