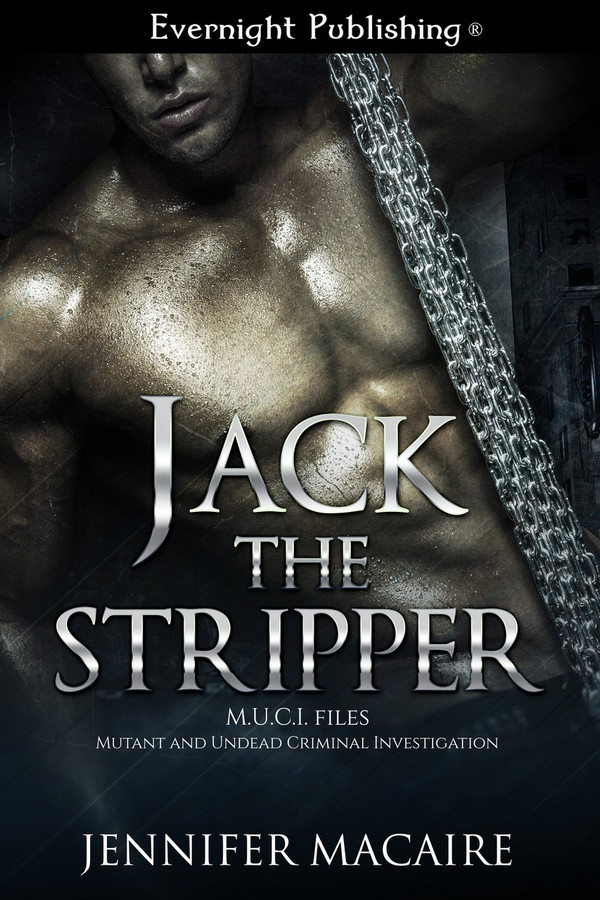 Welcome to The Purple Dee. Pull up a chair and get settled in, the show will start soon!

Our featured performer tonight is Jack the Stripper. He's Jack Severn, newly back from the dead. He's magical, he's hot, but evil he's not!

Our very own Jim Ling-Li, Necromancer extraordinaire brought him back to life, gave him some extra features, and as you'll see, made him irresistible—especially to Jack's ex-girlfriend Brianna. Jack's sexier than ever, and they're better together. But she doesn't want to risk her heart, not again, and definitely not with a zombie.

Jack also has a mission. He's back to catch the Heart Taker, the mutant that's been terrifying human and undead alike. His current obsession's none other than Jack's Brianna.

So give a big hand for Jack...he's going to need all the support he can get to catch his own murderer.

His arm fell off again. The first time it happened, he’d been holding a heavy suitcase. A woman noticed and let out a terrified scream. He looked down. The suitcase lay on the ground, his hand still gripping it.

“Ahhhh!” he screamed too. Suddenly everyone in the bus station was either screaming or running. Panicked, he grabbed his arm, first having to pry his fingers off the suitcase, and fled.

With the bus station far behind him, he slowed down and tried to take stock of his situation. He was lost. His arm had fallen off. Well, it could be worse. At least he hadn’t lost it. He took his shirt halfway off and popped his arm back into its socket—getting it backwards the first time.

It was so bizarre. His arm was like part of a toy that popped in and out of its socket. A strange, magnetic, magical effect held it together. At least he didn’t feel anything and it wasn’t too gross once you got used to seeing bare bone and muscle. No blood. No pain. No suitcase—he’d left it in the bus station. No clean clothes. A raindrop landed on his nose. Then the sky opened up and let down a deluge. Great.

Hunching his shoulders against the rain, he hurried down the street, letting his instinct guide him. A sort of whispered tingle ran through his body, urging him this way and that. It was the same sort of tingling pull that made him go to the bus station. It had led him this far—he might as well follow it to see where he’d end up. The mysterious force coursing through his body tugged him along, and then spun him around and pushed him into a dark, narrow alleyway.

He looked around.  At one end of the alley was a dumpster. At the other end was the quiet street where he’d arrived. He knew where he was. Things were starting to fall into place.

He waited a few minutes, but no one had followed him. He sighed, and went to the green door. He tried the handle, but it was locked, and when he pulled it, his arm fell off again.

Depression and dismay rolled over him. He bent down, picked up his arm, and put it back in place. Nothing was going right. He kept hoping he’d wake up from the nightmare he found himself in, but it wasn’t happening. He was dead, and he had no place to go except here. Timidly, he rapped on the green door. No one answered, so he knocked harder, and then, when the door remained shut, he made a fist and pounded with all his might.

After a few moments it opened and a man with long blond hair down to his waist peered out at him. The man rubbed bloodshot blue eyes, yawned, and then said, “You’re too early for the audition. It won’t be for another couple hours.” With that, he shut the door in Jack’s face.

Audition? Jack blinked, backed up, and looked more carefully at the green door. Taped to the door was a sign. “Auditions. All day Sunday.”

He rapped on the door again, and the blond man opened it. He looked cross. “Look man, it says starting at 2 p.m.”

“It says all day Sunday,” said Jack. “Is today Sunday?”

“Of course.” The blond man looked perplexed. “All day Sunday? Let me see that.” He stepped out and examined the sign. “Right.” He looked at Jack. “Wait a minute.” He went inside. A minute later he was back with a felt-tipped pen. Carefully, he blacked out the “All day” and wrote, “Starting at 2 p.m.”. Putting the top back on the pen he nodded. “Better.”

“Could I wait inside?” Jack asked. “It’s raining.”

The blond man had been about to shut the door. He scratched his head then shrugged. “All right. You can wait in the lounge. Follow me.”

Gratefully, Jack entered the building where he was pretty sure he’d been killed.

Jack the Stripper is part of the M.U.C. I files by author Jennifer Macaire. I found this book to be really creative and funny at the same time. I like the new spin on the Zombie myth. Jack is a zombie. He doesn’t know he is at first but as the book progresses he gets more and more of his old life back and finally remembers how he dies. He has a wicked sense of humor. Some really great traits like kindness and bravery that keep him going even when he doesn’t know exactly what he is doing or going for. Brianna is now a security specialist or body guard however you want to say it. She used to be on the police force. Her boyfriend died practically in her arms and is now back…as a Zombie. Well she is smart, brave, and takes things in stride. So she manages to work it all out. But she knows she will have to give a up a lot too to be with Jack. I like where this series is going. There is a good foundation for future stories built into this one. Ms. Macaire has me interested and wanting more of her Zombies and those who love them.

His Personal Stripper by Sam Crescent