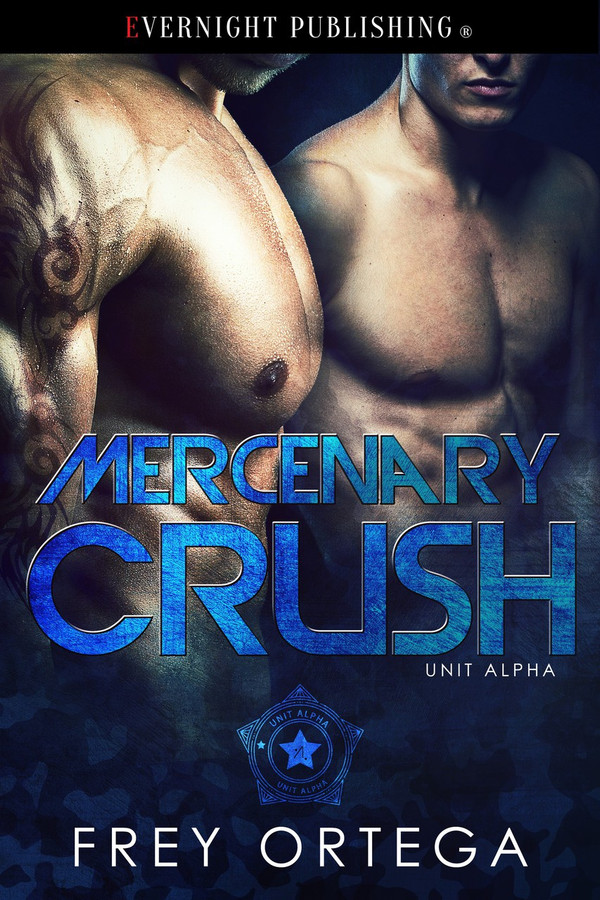 Thad Langham's life has been a series of unfortunate events—from being blackmailed to being coerced into working with his father on his shady business deals. When the opportunity presents itself to turn his entire life around, he takes it.

Caleb Lockhart, the resident sniper of Unit Alpha, can't quite get Thad out of his mind. Moody, serious, and practiced at hiding his emotions, Thad is a complete work in progress. He isn't quite ready to date just yet, but that doesn't stop impulsive, brash Caleb from acting on his baser urges. One kiss is all it takes, and now they can't get each other out of their minds.

Six months later, a chance encounter leads Thad and Caleb down the road to an actual relationship. But when Thad’s past comes back to rear its ugly head, how can a brash and headstrong sniper and a damaged, slightly neurotic businessman make things work? Will their mutual attraction survive the test of time or will their relationship just remain a mercenary’s crush?

“Something on your mind, Lockhart?”

Caleb turned to his captain, blinking. He hadn’t even realized he was staring right after Thad Langham, who slowly walked up the stairs and off God-knew-where. It was a pretty big house, after all, and it probably would have taken Caleb, like, five minutes to find him.

There definitely was something weighing on Caleb’s mind.

“He just looks so sad,” Caleb said dumbly. He was trying to find the right words to say what he wanted to say.

Ever since Thaddeus Langham had been saved from that mission they undertook a few weeks ago, Caleb had been sneaking looks at the man. Thad was … hot. Caleb wasn’t one for words, but that was the best way he could describe the blond-haired, blue-eyed man. There was something haunting him, though, weighing him down almost, and it was a disconcerting feeling to have that fact niggle at you when it didn’t concern you. Caleb tried his hardest not to think too hard about it. After all, it wasn’t his life. But every little bit of his body was attracted to Thad like the man was some kind of magnet. It took all of his willpower just to pull himself back.

Caleb was always the impulsive sort, though. This sort of thing was old hat to him. He’d done shit without thinking about it so many times before that it wasn’t a habit. At this point, it was just a part of his personality.

The captain nodded. “Who wouldn’t be, in his situation? His father used him like some sort of pawn, blackmailing him and showing him how expendable he is at every turn. You’ve seen the contents of that flash drive, Lockhart. You’ve seen firsthand how our minds respond under extreme situations. We’ve had fellow soldiers who just never seem right again after seeing all of their friends die around them.”

“Well, yeah,” Caleb said. “I dunno. There was just something off.”

Captain Hennessey tilted his head. “Something off?”

“Yeah.” Caleb nodded and finished the last of his water, setting the bottle on top of the counter. “I can’t quite put my finger on it, but it’s like this uneasy feeling inside of my chest…”

The captain crossed his arms over his chest, a confused expression on his face. “Explain.”

“It’s like… It’s like…” Caleb grunted. “Like I said, I can’t quite explain it, but it’s sort of like this. He’s so sad, right? And there’s so much shit that happened to his past. When I look at him, I feel heavy in the chest. Like someone’s poking my heart a little bit.”

Captain Hennessey was quiet for a moment, but then he smiled. “Have you suddenly grown sensitive during your time overseas?”

Caleb scoffed. “I’m just saying, I kind of felt his sadness there. It’s sort of bursting out of everything he does.”

“Uh-huh,” Captain Hennessey said after a moment. “Well, our job isn’t to take care of his psychological well-being. Our own thoughts and feelings are inconsequential, as long as we get the job done. We nip the problem right in the bud, and let someone else deal with the scars. We’re mercenaries, not therapists.”

“I know,” Caleb admitted. “I guess I just felt concerned for him for a sec. It’s not often you have the choice of seeing your father dead or locked behind bars.”

“It’s also not often that your father blackmails you into sleeping with his rivals and uses you as a bargaining chip to get shit done.”

Caleb turned to look at the doorway, staring at where Thad had been mere moments ago. It felt like those beautiful, silken strands of blond hair and deep, dark blue eyes were going to be seared forever in his memory. The expression on his face was so haunted. “I guess he’s made his choice.”

The captain nodded. “His money and support are going to be a lot of help to Unit Alpha. And he’s not a bad guy. A little broken, but aren’t we all?”

Turning to his captain, Caleb’s lips curled into a slight smile. “It sounds a little like you actually like him.”

“I’ve had a conversation or two with him, and I’m not opposed to getting to know him more,” the captain said truthfully. It was an admission that sent a little twang of jealousy coursing through Caleb, and that surprised him. Why did he feel that? “He did all he had to do to make sure that the people he loved were safe, even if that action made him look like the villain to others. We all know that good and bad isn’t so black and white in this world. But in my opinion, he’s one of the good ones.”

Caleb nodded slowly, as if letting the captain’s words sink in. He knit his eyebrows together and frowned. What exactly about Thad Langham made him think like this? He wasn’t usually this crazy. Caleb usually didn’t care so much. Maybe it was because of the expression on his face. There was something oddly beautiful about it.

The mercenary took a deep breath. “I guess there’s nothing else to do but to tell Castillo that I’m taking over?”

Captain Hennessey shook his head. “No, I’ve already informed him, and he’s agreed to let you take over. He’s thankful for the break it’ll give him. It’ll let him concentrate on his new relationship, even if only just for a little while.”

“Man, they’re only, like, one month in, and already so serious, huh?” Caleb asked. He didn’t know why it felt a little like he got jealous. He certainly had nothing to be jealous about.

Still, every thought he had went right back to Thad. There was something a little forlorn, a little untouchable, maybe even a little odd about him, and it tugged at Caleb’s heartstrings. Somehow, he knew this wasn’t going to be the end of it.

“That’s the thing about love, Lockhart,” Captain Hennessey said, offering just the slightest of smiles. “You never know when it’s gonna get you.”

You know an author is talented when he can take a character that you loved to hate and make you like him, root for him even! This is exactly what Frey does with Thad, and boy does he do a bang up job of it! Thad was Mercenary Trust&#039;s resident villain, being sweet Daniel&#039;s cheating, scheming ex, so will a book about a happy ending for him work? You bet it will! I love Caleb, and Caleb is attracted to Thad, but he knows Thad has a lot of work to do to atone for his past, not to mention that Thad has a father that would rival Satan! Can these two work through everything and actually make a relationship work, or will Thad&#039;s past be to much to overcome? When lives are at stake Thad just may see that his sexy sniper is worth fighting for, and worth working toward a happily ever after! I loved this book and you will too! Thanks Frey for a wonderful job done with Thad&#039;s story, I can&#039;t wait to see what is in store for us next!

Falling for the Assistant by Frey Ortega