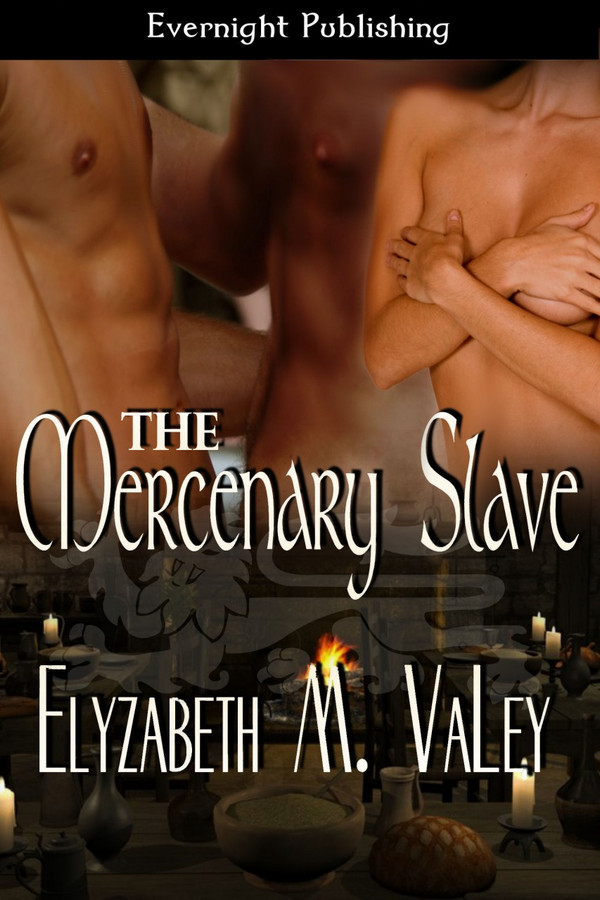 After losing his best friend, Wybert is forced to give up his life as a mercenary and become a pleasure slave. The daunting task becomes harder than expected when the attraction to his slave master goes beyond the bedchamber.

Izz-Sarava was content with his life as the Zshanti's slave master until the new serf appeared. Somehow, under his presence, his control slips and his heart becomes exposed.

As their feelings develop, will they be able to overcome a past that haunts them to pursue a future together?

Without knocking, Melassar entered the darkened chamber. It was small, with barely enough space to stand and fully outstretch your arms. If you walked more than two paces in either direction, you’d meet a wall. It was the Sledövat, or Zshanti’s watching cell. Here she would sit and observe her pleasure slaves bathe whenever she pleased. Sometimes, if she so wished, they would be aware of her heavy stares. Other times, they were ignorant to her peering.

The beauty of the Sledövat lay in its splendid peeping panel, designed to trick the person bathing. From inside the water chamber all that was visible was an impressive painting of mermen and merwomen bathing and alluring a boat of sailors. However, small slits were cut across several places in the panel, allowing Zshanti to glance into the room, without hindrance.

She sat now on a low cushion, her chemise gathered at the waist and her long legs crossed before her. Her hands rested on her naked thighs, her nails digging into the soft skin.  Zshanti turned to face him, her sky blue eyes sparkling in the dim light coming from the adjoining room.

“You took long enough, Izz-Sarava. Come here, you are missing quite a spectacle.”

Melassar hurried to his mistress’s side. Though she did not look up at him, he bowed low before taking a seat by her side.

“Look,” she whispered while leaning forward.

Melassar followed her lead. He gasped when he peered into the peephole. Zshanti chuckled softly at his side.

His mouth dried up as he watched the stunning figure of Wybert through the slit. The large man had not wasted any time in undressing after Melassar had left him in the room, instructing him to bathe and don clean clothes.

Melassar’s cock twitched in his breeches. Wybert stood in the center of the room in all his naked glory. Melassar gulped as Wybert approached the panel. Blood rushed to his cock, hardening it. Wybert was pure muscle, a man made out of stone. The muscles on his arms were defined, the plains of his chest undoubtedly solid, the ridges on his stomach unyielding.

Wybert observed the painted wall for a moment before losing interest. He yawned and stretched, the corded muscles of his biceps tensing as he raised his arms above his head. Melassar’s cock began to throb with need. Abruptly, Wybert stepped away from the wall and turned his back to them, giving them a view of his sculpted ass. Melassar discreetly massaged his cock through his trousers. Slowly, the giant eased himself into the hot tub. Letting out a satisfied sigh, he began to hum a popular ballad while bathing with the scented soap left at his disposal.

A low whimper forced Melassar to regain his bearings. Turning his head, he watched as his mistress dipped her fingers between her folds. She breathed laboriously, her breath coming out in slow pants as her left hand worked furiously at her pussy, drawing circles on her clit with hard strokes. Melassar shifted in his seat and she glanced up at him, a mixture of guilt and pleasure written on her face. Without a word, she removed her hand and they watched in silence for a few more minutes. Finally, Wybert stepped out of the tub.

“Do you think it will fit, Izz- Sarava?”

Melassar stared at Wybert’s organ. Even flaccid it seemed to be long and thick.

“It will take some getting used to, Zshanti, but I’m certain it will enter.”

His Zshanti nodded enthusiastically. “I can hardly wait for tonight. Come to me after dinner, Izz-Sarava.”

Zshanti stood and left the room. Melassar took in a deep breath. The smell of her arousal coupled with his lingered in the air. He leaned towards the peeping slits, palming his cock through his breeches.

Droplets of water stuck to Wybert’s chocolate skin, mingling with the hair on his chest and running down his navel to the nest of hairs over which his marvelous cock rested.  The thought of tasting that body, running his tongue across every plane and ridge made his mouth water. He licked his lips in anticipation. Tonight, but not now. With a regretful sigh, Melassar got on his feet. He squeezed his cock one last time.

“Duty first,” he chided. His pleasure could wait a little longer.

Other Books in the Mercenary Tales: