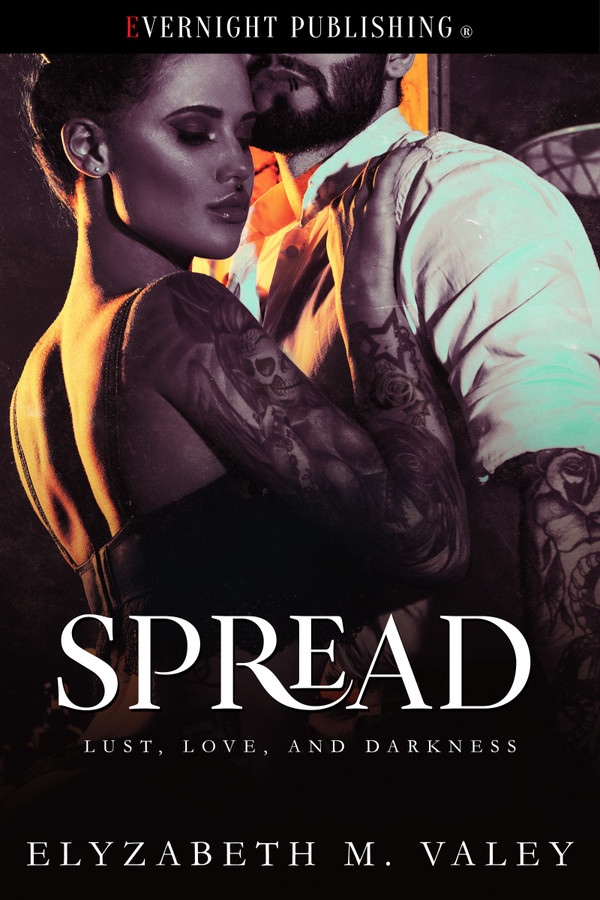 That’s the amount of time Betty has to hang on to her sanity. The time she needs until another of Antonio’s death-versaries rolls by. Four more days before the nightmares subside and the memories return to the past.

The problem is that life around her doesn’t stop, and when she meets Rayden, long-forgotten passion sparks to life. But can she move on with Antonio’s ghost looming over her?

Rayden hasn’t forgotten—nor has he ever forgiven himself. When Betty comes into his tattoo parlor, he realizes who she is, and even at the cost of his libido, he is determined to help her follow her dreams.

Time ticks fast, and as their desire grows insatiably and the anniversary of Antonio’s death creeps closer, pleasure and pain blend into one.

Rayden doesn’t want to hurt her. But can he keep her from harming herself?

Rayden had started his way back, but then, something crumpled beneath his boot. He picked it up and as he did, his whole world turned upside down.

The drawing was unfinished, but the outline was clear. It was a woman on her knees, head bowed and wrists bound in front of her in a submissive pose. His dick twitched, and he looked around hoping to find more. Bingo. Scattered on the bed as if left in haste. Women in Chains. Ropes. Floggers. Canes. All marked by an invisible hand.

He sucked in his cheeks at the sight of the last one. It was the only completely finished piece. In it, a woman with tattoos he recognized was bent over, legs spread with a bar and ass marked by a handprint.

His dick hardened, desire pumping hard through him. If he’d had any doubts of her lifestyle, this confirmed it. He swallowed drily, unsure of how to take it all in or how to act. He wanted her in the same position, pussy leaking and ass glowing red from his hand.

He jumped lightly and turned to look at her.

“I stepped on a sheet, and when I bent to pick it up, I saw the rest. Betty, they’re incredible.”

She hugged her middle and teetered nervously on bare feet. His cock jerked. His flesh tingled. He yearned to kiss her, to run his palms across her body and to make her drawing a reality.

“Do you play?” he asked softly. “Or are these mere fantasies?”

She pursed her mouth as if determining what to reply. Finally, she dropped her arms to her sides and moved closer to him.

“I used to.” She plucked the papers from him. “Not anymore. These are—” She hugged them to her chest “I couldn’t sleep last night.”

“Why don’t you play anymore? Is it because of what happened to your breast? You said it’d been experimenting with knife play?”

“In part.” She shrugged.

Rayden flicked his lip ring. There was something she wasn’t telling him, probably related to her time with Antonio, but he decided not to push further. He didn’t want to scare her away and have her shut him off completely.

Her fingers tightened around the sheets. She went around to her nightstand and placed them beneath a book. Rayden’s heart raced in his ears.

“Yes,” she finally said. “I do. But the stakes are too high to ever do it again.”

Her eyes were large, like a puppy’s fearful gaze when a storm raged outside. His protective instincts flared, and he clenched his jaw. She didn’t know it, but he knew whom to blame for her fear. Antonio. If the bastard weren’t already dead, he’d give him a solid punch in his smug face. After so many years, Betty deserved happiness. She had the right to discover what being a submissive towards a man who actually cared was like.

“Have you only played with him? The guy that fucked you over?”

Her hands clenched and unclenched, and she leaned lightly against her mattress.

“I tried playing with someone else, a few years ago,” she said. “But it didn’t work out. He ended up using me. It was another dark period for me. I relapsed.” She shook her head. “When I returned to rehab, the therapists suggested I try art to help me find an outlet. It’s what reached through to me.”

“How long ago was that?”

“Six years. I haven’t bothered finding someone else to play with. It’s too dangerous.” Her gaze bored into his. Fearful, yet, full of the same longing pushing him to get closer.

“You’ve been playing with the wrong people.” He stood a breadth from her, her fragrance lingering in the air, her body heat inviting him to take the plunge. Her mouth parted.

“Give me permission, Betty,” he rumbled.

The tip of her tongue roved across her bottom lip, and he dipped his head, expecting her to say the words which would set them both free.

“Do it, baby doll,” he murmured, so close her warm breath fluttered across his mouth, sending his heart into a frantic pounding.

“It’s late,” she said, the husk in her tone impossible to hide. “You should go.”

Rayden took a hasty step back. Disappointment lodged in his throat, choking him. He stared at Betty. She didn’t look at him, nor did she need to. Fear clung to her, like the artist’s constant dream of perfection. She was a thing of beauty. A half-finished work of art, black and white, but missing the colors that would bring it to life.

Time. Beauty needs time. You can’t rush art, can you?

Antonio is a past life, a ghost but he still haunts Betty. She dealing with the darkness that seems to loom over her when she meets Rayden again. Their attraction sparks an unexpected passion that may just save them both. Oh Betty. Poor, sweet Betty. I just wanted to wrap my arms around her and hug her. She’s had a rough life and although she’s survived, the past still scars her. Rayden is in love, smitten, overcome with Betty. I really love their romance. If every anyone should find their happy ending it’s these two. The romance is balanced lovely with the action and drama. That really made for an edge of my seat read. Although I loved the first book in this series, Open, the second book, Spread is … yeah, it’s just as amazing! I’ve also got a thing for tattoo parlor stories. They’re always so sexy. And this story was full of that heat. ​ If you’re looking for a heart wrenching, must read, romance than Spread should be at the top of your list.