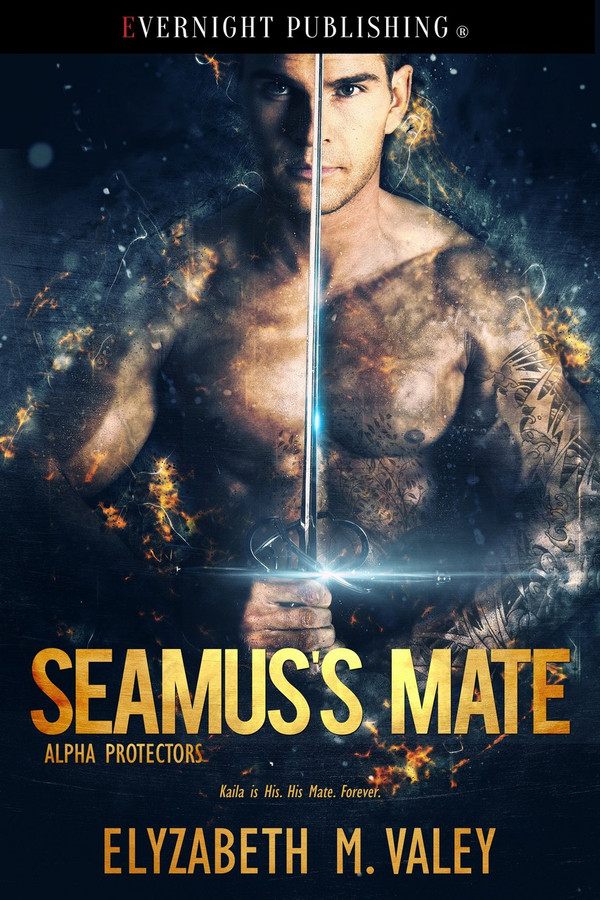 Kaila is His. His Mate. Forever.

When Seamus discovers Kaila is in danger he sets out to save her. He couldn’t care less that she doesn’t want him there. His objective in life is to love and protect her. Besides, she might refuse to be with him, but her body knows better. With both their lives on the line, she can’t say no to his aid, can she?

For years, she has ignored her feelings. Kaila’s mission was supposed to be easy: enter the demon’s lair and save her sister. Then, he came along. For close to twenty years she has been fighting against the mating pull. She has avoided Seamus at all costs, but now they’re both trapped in hell and she has nowhere to run, except, maybe, into his arms.

She didn’t acknowledge him, and he rushed to catch up with her. He grasped her wrist, spinning her around with force.

Kaila’s gaze narrowed. Her lips pursed into an ugly grimace.

“Let go of me, Seamus. Why don’t you let this weak human die already?” She poked him in the chest with her index finger. “I didn’t ask for your help.”

Seamus scrubbed a hand over his face. “What is wrong with you? You’re not making any sense. I know you didn’t ask for my help. I gave it freely, but you aren’t going to deny that we are different, are you?”

Blinding rage took over him. Seamus dug his fingers into her arm. He was tired of all this nonsense. He pulled her closer. Her arm shot out to keep him away, but not fast enough. He swooped down and claimed her lips. She gasped, and he seized the chance to push his tongue into her warm recess. He groaned. She tasted better than he remembered. For a brief moment, she grappled with him, attempting to break lose, but he grabbed her arms with ease and held them behind her back.

He twisted his tongue around hers, drawing it out from its reluctance and forcing it to battle with his. Something in his chest tightened as she responded. Yes. He sucked and tugged and demanded more. She gave it to him. Her body arched against his, her mouth seeking his with almost as much desperation as he possessed. His hold on her slackened. He wanted to touch her everywhere. To press his lips to her body and taste every inch of her. His hand trailed to the curve of her ass, then to her waist. Then, bang! Her knee slammed against his leg. He released her, cursing. He’d probably be incapacitated for life if she’d hit her mark.

“Whenever you want, babe. I know you’ve got the hots for me, even if you just tried to castrate me and failed miserably.” He laughed.

Kaila spun and walked away from him again. She was probably not trying to be sultry, but her hips swayed in that way that drove a man to stare. She lifted her arm and gave him the finger. He grinned. She was pissed and sexy. He loved it.

Seamus took in a shaky breath. Watching her back on her feet, her spirit alive and surging, was soothing. He rubbed at the spot where she’d kneed him. It hurt, but it was proof that she was herself again, not lying in a puddle of blood, shredded to pieces by a monster. He glanced at the Dream Catcher’s skeleton out of the corner of his eye. He hadn’t told Kaila the details of what he’d suffered inside the beast. The images of her dead body, broken, destroyed. He didn’t wish his worst enemy a fate like that.

He stretched his wings and snapped them back into place. Even they ached. He adjusted his now-flaccid cock and shuddered. He hurried after Kaila. The place appeared deserted. There were no scones in the wall giving off light. Instead, the walls themselves seemed to pulse with energy. They glowed from the inside as if behind them a relentless flame burned. He frowned. He extended his arm and placed his pinkie on the rock. It burned.

“Damn it.” He put the digit in his mouth, hoping to sooth the sting. “Don’t touch the walls, babe. They’re hot.”

Kaila didn’t reply, but she moved a little closer to the center of the path.

​Oh my God. Okay. I have to try to put what I feel into words. Give me a second here. Deep breath.… Seamus’s Mate is about Kaila who has to enter a demon’s lair to save her sister. She’s been avoiding her mate Seamus. But when they both become trapped she has no one to turn to except him and his muscular arms. Wink. Wink. So much feels. So much good, good feels. Oh, right. Grown up words. I’m working on it. I love this book. I mean totally love it. Kaila is focused and stubborn, she’s not putting up with Seamus’s crap which makes me love her even more. She’s saving her sister and that is that. Seamus is the sexy alpha male who is so dominant he makes me shiver. Together they get into a crazy situation with well plotted action, super sexy romance and an ending that makes me yearn for more in this series. That’s all your getting from me. Go buy the book for yourself! Seamus’s Mate is like candy to sexy alpha lovers. Sink into this sweet, tasty treat and enjoy!

I&#039;m not usually a big fan of paranormal romance, but reading Seamus&#039;s Mate was a new and quite magical experience. The author is not only an excellent writer with rich language and wonderful phrasings, she pulls the reader through an emotional and suspenseful rollercoaster from page one. As a reader, we get everything from deep love and devotion for a sick sister, perseverance and courage in the most challenging of times - facing evil in many forms - and unquestionable, all-consuming desire for one&#039;s mate. The action scenes are tense and well choreographed (I don&#039;t mind that some of the things our heroes are capable of stretch my imagination), and the steamier scenes are dripping hot. I highly recommend this story and look forward to reading more from the author!