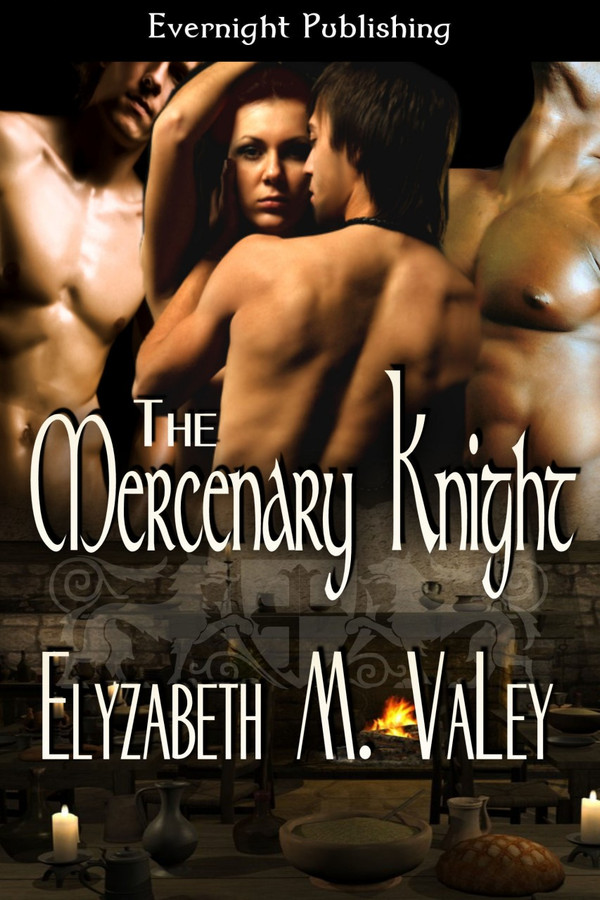 “Men have their needs, as do women.” That’s Tanya’s premise as she flees her hometown and encounters four helpful mercenaries: Conrad, Wybert, Gregorii and Johann. However, her unexpected attraction to the aloof Conrad will tickle not only her desire but also her heart.

Once a knight of the kingdom, Conrad now roams the road as a ruthless mercenary in the company of his three men. Years have passed since he quit the Code but old habits die hard. He can’t stop himself from being a chivalrous gentleman to the tavern wench he’s saved, even if his desire for her surpasses anything he’s ever felt before. But, for how long will he be able to fight the temptation?

Gregorii hissed. His hold on her, which had grown lax, tightened once more. “Are you sure of this?”

“Did you not hear when I said that women have their needs too?”

Gregorii grinned and bent his head to capture her lips again. He was gentler this time, taking his time to taste and tease. The tip of his tongue brushed against her lips, seeking entrance. Willing, she gave him access. His tongue plunged into her mouth, sampling every corner. She captured his tongue and sucked lightly. Gregorii returned the kiss with frenzy and wrapped his arms tightly around her. After a moment, he lowered his hands and firmly cupped her full breasts.

Tanya moaned and pressed herself to him, her hardened nipples begging for his touch. Gregorii pinched them lightly. Releasing her mouth, he gently lifted her. Tanya yelped in surprise. He laughed and turned her in the saddle. Her eyes widened as she came to face him. Gregorii winked at her. Before she could react, he grasped her face and kissed her fiercely. Tanya slid forward in the saddle. She moaned as she came in contact with his stiff shaft. He tugged at the lace of her bodice and lowered her chemise. Her breasts became fully exposed and Gregorii cupped them with tenderness, his index finger grazing her tight nipples.

“So creamy, so beautiful,” he murmured. Without further comment he pressed his mouth to her breast, lightly sucking one of the pink areolas. Tanya let out her breath in a hiss and thrust her chest forward, demanding he take more. She groaned as he released the wrinkled bud with a pop and quickly took the other one into his mouth. He scraped the nipple with his teeth and she instinctively bucked against him. Desire pulsed through her veins and culminated between her thighs. Her hands wound their way underneath his tunic and she wondered at the solid ridges of his stomach. When she reached his chest, she stopped.

“It is the way of my people,” Gregorii replied, leaning in to kiss her again. Tanya melted into the passionate kiss. She caressed his hairless chest, enjoying the smooth, silky feeling of his skin in contrast with the firm planes of his chest.

“Tell me you took off those hose Johann lent you,” he demanded in a whisper.

Tanya giggled. “I would not be wearing my skirt if I hadn’t.”

“Oh,” she said as she felt his throbbing erection against her.

With a wicked grin, Gregorii caressed her inner thighs. His hands brushed against her slick sex and she clamped her fingers around his shoulders, trying to bring him closer. His fingers stroked her wet pussy and she quivered in delight. Tanya whispered his name as one of his fingers entered her. Entangling her hands in his ponytail, she pulled him to her with a searing kiss. Another finger accompanied the first and she rocked harder against him. Pressure began to build in her belly as he easily slid in and out of her soaking pussy. Suddenly, he removed his hand and she whimpered in frustration.

Tanya couldn’t help smiling appreciatively as she caught sight of Gregorii’s hands swiftly undoing the lace of his hose. She licked her lips as he brought out his engorged cock, the tip already gleaming with pre-cum. Without warning, he was lifting her in his hands, guiding her until the tip of his cock was pulsating against her sodden cunt. She moaned as she adjusted to the pressure of his dick buried deep inside her. Gregorii dropped soft kisses on her neck and chest while his hands tugged at her nipples, causing her body to tremble with small ripples of sensuous delight. When she began to move against him, he circled her waist and took hold of the reins once more.

“Now, you shall see and feel.”

With a light kick the horse was off in a gallop. Tanya cried out in surprise as intense pleasure flooded all her senses. At every leap and jump the horse executed she was lifted and slammed back onto Gregorii’s stiff member. Her nails dug onto his shoulders as she hung on for dear life. Gregorii brought her closer, her sensitive breasts pressing into his torso. She mewled in delight as his cock plunged deeper and faster inside her. Gregorii groaned against her ear, absorbed in the delightful ecstasy of their lovemaking. He nibbled on her earlobe and her breath hitched in her throat. The horse quickened its pace beneath her and she almost forgot to breathe as Gregorii’s thrusts became a fevered carnal force pushing into her.

Other Books in the Mercenary Tales: