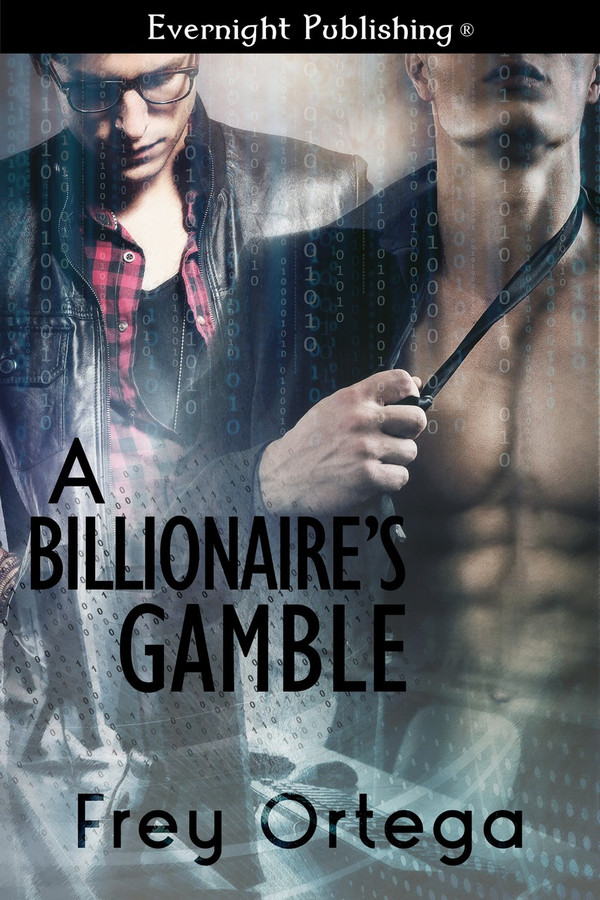 Dylan Ferrara is an academic wunderkind whose life just got a whole lot messier. After his academic career comes to a staggering halt, his best friends give him a reality check: join the ‘real world’ and start working, or continue chasing an impossible dream. Reluctantly, he agrees.

Remington Whitley is a billionaire who’s sick of the monotony of his playboy life. One day, his company invites a geeky little data scientist over for an interview. The man piques his interest enough on a personal level that he decides to take a gamble and invite Dylan out for a date.

Dylan is conflicted. Remy is a gamble in and of himself, and Dylan’s inexperience makes him cautious. Dylan doesn’t know if he wants to take the bet with such high stakes on the line.

But what can he do when throwing the dice and leaving his fate up to luck feels so, so right?

There was just something about him. Dylan drew Remy’s attention like no one else had ever before. He had immaculate clothes, and his wavy black hair was tousled without really trying and looked incredibly soft to the touch. He had bright, deep blue eyes, held wide as though he were in shock. Everything about him just screamed inexperience and naiveté.

Dylan had thick-framed glasses that were held up kind of wonky, which told Remy that the man before him probably only had one set and they’d most likely been stepped on at one point in time. Remy almost licked his lips at wondering what was underneath this svelte man’s clothes….

Then the man cleared his throat. Oops, Remy thought sheepishly, he’d been caught staring. He moved toward the desk with all the grace and poise of a panther, sitting himself down with a right good plop and squeak onto his chair, and smirking at the uncomfortable-looking man in front of him.

“So. I’m Remington Whitley and I’m the CEO of Whitley Travels.” He stuffed his shirt back into his pants to attempt to look a little more decent, though he knew how disheveled he might have seemed. At least he made an attempt, though.

However, he knew he could pull off a rumpled look quite well, which also explained the way the man’s cheeks turned pink and the way he looked away from him like he was trying very hard to be polite.

Remy extended a hand, offering one of his roguish smiles. “It’s nice to meet you.”

Dylan nodded. His cheeks were tinged pink, but he extended his own hand and shook Remy’s as firmly as he could. “Mister Stanton sent me here. He told me you wanted to see me.”

Observant as he was, Remy saw every little nuance of a reaction on Dylan’s body. From the way he fidgeted in his seat, adjusting himself slightly, to the way he clasped his hands together and placed them on his lap, even the way he kept a tight hold of his bag—it was clear to Remy that he was maybe making Dylan a little discomfited.

That was a natural reaction to meeting any future boss, right? Remy shook his head. He glanced over at the folder in front of him, clearly labeled with the company’s logo and Dylan’s name typed on top, opened it, and scanned whatever document was there.

“Ah, yes. You’re our new hire. You’re the one we offered some contractual work to,” Remy said, nodding slowly. The smirk on his face only widened. “Really good grade point average, you were actually scouted by a couple of companies during your college graduation, including the Whitley Group, but you turned them down in lieu of going to graduate school.”

Dylan nodded and cleared his throat. The way his Adam’s apple bobbed and the pleasant, albeit self-conscious smile only made Remy’s inner child giggle with glee.

Was his mere presence unnerving for the man in front of him?

The thought was enough to make Remy chuckle. It wasn’t like he was going to eat Dylan. Well, the thought of eating certain parts of him—and slurping and suckling on others—was definitely interesting enough. There was a little part of him that wanted to see if Dylan’s pink-cheeked expression would be the same in the bedroom.

“Well, everything is in the contract Doug gave you, although there are other perks and responsibilities that aren’t really part of your job. Some people might not consider it a benefit, but you’ll be directly under me,” Remy said, the corner of his lips curling upward in the slightest smirk.

Dylan’s eyes widened and he adjusted his glasses. “E-Excuse me?”

Remy chuckled, but then he nodded. “Oh, boy. I phrased that wrong, didn’t I? Well, you’ll work primarily under me. You don’t really fall under any of the current departments, so you’ll report to me. But I’ll make it clear now that you won’t be my assistant. I already have one of those.” Then he offered up a saucy little wink, trying to be as disarming as possible.

Dylan Ferrara was just so easy to read and play with. His earnestness felt refreshing.

“Don’t worry though. I’m not the type of boss who’ll ride you hard. That is, unless you want me to.”

Well, that was just a little too upfront with the double entendre, Remy thought to himself.

Totally loved the title of this book so I knew I had to read and let’s face it I love me some M/M action. I enjoyed reading about these characters and realizing that just because you a plan doesn’t always mean it will work out. Life usually takes us on crazy adventures and the outcome sometimes is better than we planned. I will have to say that one of my dislikes was how quickly they fell for each other not that it’s a bad thing but sometimes is not realistic in contemporary books. with that being said I did enjoy the story and how hot Dylan and Remy are in this book. I mean really who doesn’t want to taken and consumed by a hot guy like Remy… If there is a line somewhere full of hot, sexy, and charismatic guys sing me up… Dylan and Remy will have to deal with conflict in this book and with Dylan’s confidence growing with each day he knows he can rely on Remy to catch him. Overall I liked this book and hope that it can become a series because the author can write really sexgood scenes. I give this book 4 diamonds so make sure you get your copy

I love this book and this author! Frey Ortega has a talent for writing paranormal romance, and now with this book it is clear he can write any genre he wants to, and write it well!! Dylan loves to learn, and while working on his Phd, after getting two masters degrees, he suddenly finds himself in need of a job, luckily there is a need for his skills and he gets a job offer not long after putting up a listing on a website, little does he know this job will change his life forever! Remy is used to getting what he wants, be it in the real world, or the world of hot willing men and women, so imagine his surprise when his cute bespeckled new hire shakes him up so bad he finds himself not able to think of much else! As chemistry grows and Dylan and Remy draw closer, is there anything that could throw a kink in the works? When Dylan finds evidence that someone in the company is up to no good, will it put him in the path of danger? This is a wonderful book, and I sincerely hope that we will see more of Remy, Dylan, and Remy&#039;s friends, who really need books of their own! Grab it friends, you will love it too! Thanks Frey, for going out of your comfort zone and doing a bang up job of it!

Falling for the Assistant by Frey Ortega