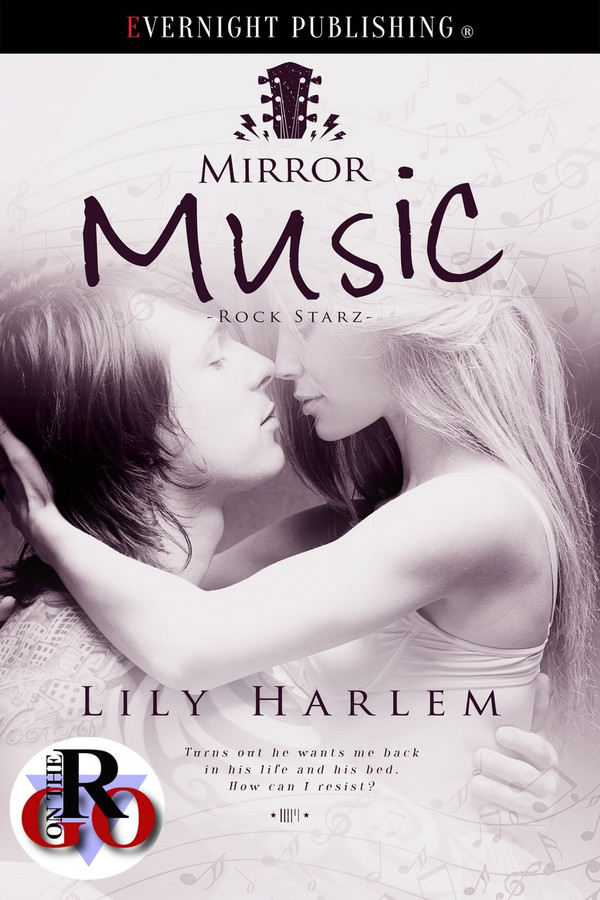 As Robbie Harding belts out hit song ‘Jenny’ to a packed Wembley Stadium, my heart tears, my mind spins, and my insides heat to a lusty, pulsing boiling point. Why me more than the other 90,000 screaming fans? Because I’m Jenny—he’s singing about me.

The guy is sex on legs with a voice to match and has starred in all my hot dreams since the day boys became interesting and for three precious years, it was more than hot dreams. Turns out he wants me back in his life and his bed. How can I resist?

So with lots of naked, sweaty and downright dirty time to make up for, I wield my backstage pass, hunt him down and refuse to be starstruck by the boy next door. Seems Robbie agrees, as he insists on tuning in to my needs and rediscovering our rhythm in a very unusual bedroom.

He looked up, and as his gaze devoured me from the tips of my toes to the top of my head, the naughtiest grin I’d ever seen slid over his face. “My God, Jenny, you were so beautiful growing up you made me ache, but now—now you’re beyond exquisite.”

“Robbie,” I said, placing my hands on the hard balls of his shoulders. “You don’t have to say that, I’ve seen who else you’ve dated—”

“None of them compare, none of them come close to you.” His voice deepened. “Do you know why?” He slid his big hands from my ankles to my knees.

“No,” I said in a shaky voice as he exerted gentle pressure and eased my legs apart.

“Because not only are you stunning on the outside, I know you’re beautiful on the inside too, in the very depths of your soul.” He tickled his fingers up my inner thighs.

I licked my lips, swollen from our hard kisses, and watched their progress.

“You’re beautiful right down to the core,” he said, watching his fingers move over my pale flesh. “Sweet and caring, truthful and pure, and I can’t believe I was so stupid to let you go. I can assure you…” he trailed his finger into the soft folds of my pussy and I let out a small whimper of need, “I won’t be letting you go again, not ever.”

He urged my legs wider with his shoulders, dipped his head between my legs and planted a long, hot kiss on top of my little fuzz of blonde pubic hair. I hardly dared to hope he’d do what only he had ever done to me.

“You remember how much you used to like me worshipping you like this?” he asked, stroking his thumb over my clit, teasing it from its hood.

“Yes, yes I do,” I whispered, resting my hands on top of his head. His hair was still damp from the shower.

“Then lie back and enjoy,” he said in a voice that was smoky and rich with desire. “I know I’m going to.”

Oh God, he was going to do that. I let the cool, soft sheets envelop my back as the song about sexed-up party animals ended and ‘Jenny’came on. I was Jenny; this song was about me. I looked up at the reflection on the mirrored ceiling. For a moment I was shocked to see myself sprawled wantonly on the big bed. My hair was spread out like a fan, my small breasts tight and pale. Between my legs was Robbie’s head, shockingly dark against my creamy skin tones and the light silver of the duvet. Then his broad back and wide shoulders filled the space where my legs folded to the floor. Even hunched over, he looked so much bigger than me.

I tensed as Robbie’s tongue began to explore where his fingers had left off. Stroking my soft, damp flesh and delving into every crease and fold. I let out a moan and arched my back as his tongue finally tangled with my clit. His fingers joined in, searched out my entrance and pushed up to the knuckle. “Robbie,” I gasped and pressed down for more, suddenly desperate for it, desperate for that filling sensation.

Still I kept my eyes open, watching him, watching us as his voice ricocheted around the room, singing about his shattered heart and his broken dreams.

In the second installment of the Rock Starz series, author Lily Harlem delivers a hot appetizer for reading on the go. MIRROR MUSIC, which logs in at under 35 pages, focuses on a lost love between lead singer Robbie Harding and Jenny. Four years have passed since their breakup, but all it takes is one encounter for the sparks to rekindle. What I like about Lily Harlem is the electricity she forms between her characters. It was easily evident that Robbie and Jenny had unfinished business. With Robbie&#039;s rock star persona bringing their feelings to the surface in his music, it is only a matter of time before they work out their differences or walk away. - See more at: http://erotic.theromancereviews.com/viewbooksreview.php?bookid=2924#sthash.DFtNfNmR.dpuf

Jenny is at a Manic Machines concert listening to Robbie Harding belt out their new hit song &quot;Jenny&quot;. And her heart is pounding with excitement, the song is about her. Robbie sent her the tickets and a back stage pass. She hasn&#039;t seen him in years since they broke up. He accuses her of cheating and she walks out on him. Seems Robbie wants Jennie back into his life and he&#039;s gone to great lengths to get Jennie back into his life. He brings her back to his house. (Ian&#039;s old house) And while he&#039;s in the shower, Jennie does a little exploring. You&#039;ll have to read it to believe it. I have to say I&#039;m not sure I&#039;d want that bedroom. As with Mattress Music, it was too short for my liking, only because I wanted MORE. So very good. I&#039;m definitely a Lily Harlem fan. I received an ARC in exchange for an honest review

I was given this book free in exchange for an honest review. I&#039;m no stranger to Lily Harlem stories although most of the ones I&#039;ve read by her have been longer stories. I confess that normally I struggle with short stories too. Short stories often don&#039;t have time for much plot development so I struggle with them for that reason. However. Lily does not disappoint in this short story. Yes it&#039;s a simple plot but it&#039;s well structured and well written. The chemistry between the two main characters sprang out of the pages and thrilled my senses. I love flirtation and chasing, I love firey passion and thrills. Mirror Music gave me all those and more. The scenes are well balanced for the length of the story and are as hot as usual. I particularly enjoy Lily for the way her words spark such wonderful images in my mind. I almost want to know what happened to Robbie and Jenny after Mirror Music but I believe their story ended where it should too.

I love it when everyone knows what they want and go after it! Here two past lovers, still longing for each other take a chance on reigniting their love for good! I love an quick HEA with heat and passion!